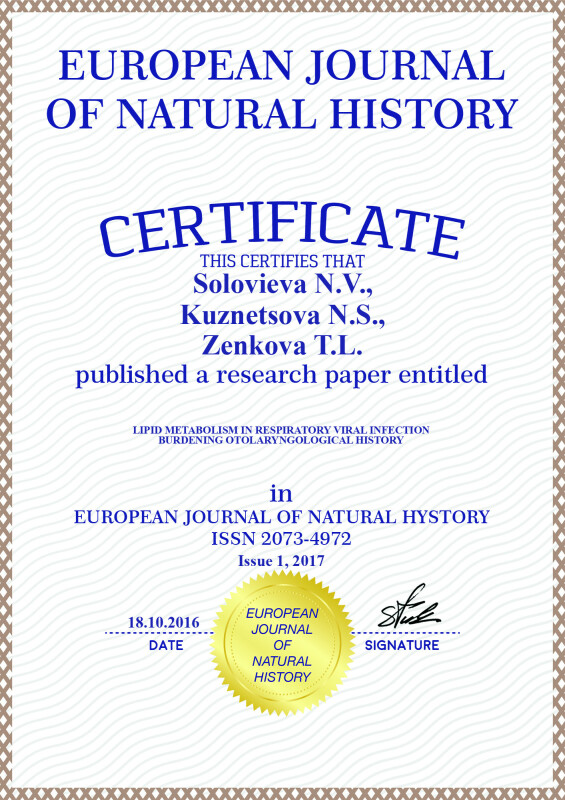 The article presents the results of influence of burdened otolaryngological history on data of the system “lipid peroxidation – antioxidants”, range of higher fatty acids in children with acute respiratory viral infections. Deep negative changes of these parameters are revealed in patients with chronic upper respiratory tract diseases at the level of bronchopulmonary system and body as a whole.

The impairment of the respiratory system is determined by the independent role of the bronchi in the pathological process and the secondary premorbid background which increases the rate of the disease, weighing outcome and the therapeutic prognosis. The approach to the relationship between acute and chronic non-specific lung diseases, upper respiratory tract (URT) and the interdependence of the components of bronchopulmonary apparatus is one of the main approaches in modern pulmonology. The incidence of acute respiratory viral infection (ARVI) is still high among pediatric patients. That’s why there is a need to study the problem including the biochemical level.

The purpose of the research: is to study the influence of chronic recurrent disease of upper respiratory tract on dynamics of lipid homeostasis parameters in acute respiratory viral infection.

The study involved 29 children (3–14 years) with acute respiratory viral infections (medium-severe form) living in the city of Chita and have been treated in outpatient departments. The patients had a comprehensive X-ray examination and a consultation of otolaryngologist. The control group included 50 healthy children without a history of viral infection in the last six months. During clinical study two subgroups were isolated from the control group: A – without burdened otolaryngological history and B – with a history of upper respiratory tract pathology. The parameters of lipid metabolism in the vapor exhaled air condensate and in the blood serum were studied by the well-known laboratory methods [9-15]. Statistica 6.0 for Windows software package (version 6,0 StatSoftInc) was used in statistical analysis.

The received findings showed that in acute respiratory viral infections the deficit of antioxidant activity (AOA) was revealed in the surface-active lining layers of the lungs in patients subgroup A – 62,5 % (p = 0,042). In the same group but without chronic foci of infection this index in expirate was 16,3 % (p = 0,038). It is obvious that the penetration of the virus into the body of the child suffering from concomitant otolaryngologycal pathology exacerbates the moderate imbalance of prooxidants neutralization factors due to the development of free radical process. The deficit of antioxidant activity of blood serum did not reflect the significant changes of organism resistance. It proves that the organism has the adequate compensatory possibilities. Besides there was an increase both in the initial and final intermediates of lipid peroxidation in the midst of ARVI in the subgroup B in comparison with A. The development of acylhydroperoxides of lipids (1,56 and 1,76, p = 0,032) was observed in both groups at the level of pulmonary surfactant system, TBA-positive material (142,4 %, p = 0,047 and 157,9 %, p = 0,021) regarding to the control data. It proves the fact of intensification of free radical processes in the surface layers of the lungs and on the organism level due to chronic recurrent pathology of URT. The correlation analysis of parameters revealed that in patients with ARVI and otolaryngologycal pathology there was a link between the acyl hydroperoxides content and the deficit of antioxidant activity (AOA) in the expirate (r = +0,74; p = 0,001); concentration of TBA-active products and the level of antioxidant activity in the system of pulmonary surfactant (r = +0,83; p = 0,003); between the final and initial products of peroxidation of blood lipids in the surface layers of the lungs (r = +0,88; p = 0,001). The same link was registered between the deficit of antioxidant activity of blood serum and vapor exhaled breath condensate (r = +0,57; p = 0,048). As it’s known the level of fatty acids (FA) is a reflection of the structural and functional condition of the alveolar-capillary membrane. The total pool of fatty acids in the condensate of children with ARVI tended to decrease in both groups with more marked changes in the subgroup A: the reduction of the amount of stearate C17:0 and the increase of concentration C20:0. The presence of infection in the URT caused the deviations from the norm due to falling levels of C14:0, C18:0 (p = 0,038). The growth of monoenic FA in the subgroup A is 26,9 % (p = 0,035) in the subgroup B is 15,4 % due to palmitoleic acid. The polyunsaturated FA of blood serum led to the development of their relative deficiency in ARVI depending on the presence of chronic infection. Thus for the children of subgroup A without otolaryngologycal pathology in their history the decrease of linoleic acid concentration to 1,2 times (p = 0,028), arachidonic acid to 1,4 (p = 0,031) with the increase of linolenic acid to 1,6 (p = 0,033) were revealed. Chronic illnesses of the URT had practically no effect on the content of linoleate, although similar changes in the subgroup B occurred for linolenoate – the increase to 2,0 times (p = 0,021) and the decrease of arachidonate – 1,7 (p = 0,017). The disintegration in polyene FA family confirms the existence of complex metabolic pathways conversion of lung surfactants. Furthermore the uniformity of vibrations both in blood serum and in the surfactant membrane of a number of fatty acids (C20:4, C18:2, C18:3) was revealed.

The interpretation of the received data in the aspect of chronic recidivous URT pathology revealed the highest degree of free radical lipid peroxidation disbalance in this group of children both at the level of the alveolar-capillary membrane and the whole organism. The peculiar mark due to the secondary infection and the indirect influence on the fatty acid composition of lipids in spite of the same type vibrations was revealed in certain specific features.