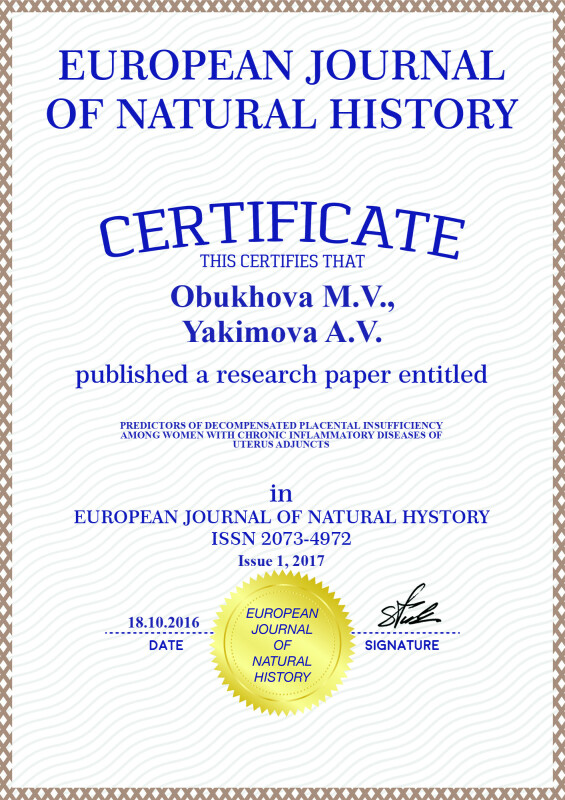 Regardless of the general trend towards growth in coefficient of total birth rate, its current level in Russia remains among that of countries with the lowest value of it [5]. This situation is significantly complicated by the fact that reproductive growth of women remains unsatisfactory. Besides, regardless of certain decrease in perinatal death rate, during recent years coefficient of perinatal death rate, according to the data of 2014, remains above 8 ‰ [5].

The main achievement of modern stage in studying pathogenesis of obstetrics complications is cardinal broadening of researchers’ ideas on angiogenic imbalance and vessel disturbance that attend to early stages of placental insufficiency and associated gestational complications [10], especially for women with chronic inflammatory pathologies of uterus adjuncts.

One of the most important functions of cytokines in human organism is regulating ebryogenesis, foundation and development of immune system organs. Cytokines, produced by cells of placenta, play an important part in regulating survival and normal development of an embryo, as well as forming inborn and obtained immunity for protection against infections [4]. Besides, growth factors IL-6, IL-8 play a leading part in processes of embryo implantation and its further placentation. Revelation of pre-clinic system changes in woman organism, particularly related to development of placental insufficiency, opens perspective of verifying precursors of gestation complications according to screening research of biochemical and biophysical indexes. Reserves of decrease in severity level of gestational complications are predicting placental insufficiency and revealing its markers at early terms of gestation.

Depending on peculiarities of pregnancy flow and its outcome, women were divided into three clinical groups.

Each group of women was tested with the following examinations: analysis of anamnestic data and detailed evaluation of pregnancy flow and delivery, presence and nature of complications, and also complete clinical-laboratory inspection of blood with definition of laucoformula, triple ultrasound examination with doppleometry. On week 32 of pregnancy embryo condition was evaluated with cardio-current graph examination. After delivery morphological study of placentas was made.

Ultrasound examination was made in female consultation of maternity hospital № 2 (with apparatus “Mindray DC-7”).

Prediction of placental insufficiency flow and definition of its markers among women with chronic inflammatory pathologies of uterine adjuncts at pre-clinic stage I and II was made via collecting blood samples and its examination with systems of immune-ferment analysis IL-6, IL-8, IL-10, PIGF, VEGF-A.

In order select the most informative indicators (predictors) of decompensated placental insufficiency development mathematical apparatus of ROC-analysis was used with evaluation of sensitivity and specificity of all values for the studies variables. Besides ROC-curves, the basic characteristics of each indicator were: area under ROC-curve (ROC-area), standard error of evaluating ROC-area (S.E.), probability of first type error in comparison between ROC-curve and reference line (p), and value of each indicator with the highest sensitivity and specificity.

Method of logistic regression was implemented (multiple regression with logit-transformation) in analysis of complex influence. Modeling was made with module “Nonlinear estimation” with function Quick logit regression of statistic application pack STATISTICA v. 10.0. Procedure of modeling initially included a set of the most significant predictor of all used ones. Then method of forward stepwise was used to select the second predictor and so on until classification power of model stopped to improve (according to criterion χ2). As a result of implementing this modeling method logistic classification models of evaluating probability of placental insufficiency risk were received.

In prediction of placental insufficiency at early terms of pregnancy hypothesis of endothelial dysfunction according to studying growth factors represents certain interest. In this regard a great attention is paid to growth factors VEGF-A and PIGF that participate in endogenic regulation of angiogenesis.

It was revealed that the greatest significance in evaluating development of placental insufficiency as early as in the first trimester was registered for IL-6 (0,99 ± 0,01; p < 0,0001). At the same time we can conclude underline that sensitivity for point 36,6 pg/ml equaled 100 %, and specificity – 92 %.

In result of stepforward introduction procedure we received model, constructed upon values of IL-6, WBC, and concentration of serum albumen (Table 2). High values of IL-6 increase calculated values of placental insufficiency emergence risk, while increase in number of leucocytes and albumens has an opposite effect. The final values of statistic significance for the model of evaluating probability of placental insufficiency are characterized by χ2 = 114,21; p < 0,0001.

For verification model with apparatus of ROC-analysis its results were very demonstrative and shown high classification efficiency of the represented model (p < 0,0001).

As a result of implementing procedure of stepforward inclusion we received the best model, constructed upon values of IL-6 and IL-8 (Table 5). We should outline that increase in level of the mentioned cytokines increases probability of placental insufficiency. The final values of statistic significance for model of evaluating placental insufficiency probability is characterized by χ2 = 61,41; p < 0,0001.

After verifying the model with apparatus of ROC-analysis its results proved to be quite demonstrative and shown high classification efficiency of the presented model (p < 0,0001).

Thus, it was established that for the first trimester among all possible predictors of placental insufficiency the greatest significance belongs to IL-6, PIGF, IL-10. Increase of IL = 6 above 36,6 pg/ml, PIGF above 69,4 pg/ml, IL-10 above 57,6 pg/ml in blood serum of patients during the first trimester of pregnancy can help us reveal risk of placental insufficiency development among them.

For the second trimester to reveal risk of clinically-significant placental insufficiency among pregnant women with chronic inflammatory diseases of uterine adjuncts predictors IL-6 (46,2 pg/ml), IL-8 (44,9 pg/ml) proved to be the most reliable. Correspondingly growth in levels of IL-6 and IL-8 above the mentioned values can indicate risk of decompensated placental insufficiency development.

The presented conclusion defines the necessity to develop algorithm of predicting placental insufficiency at the stage of pre-gravidary preparation and in early terms of pregnancy. These studies can serve as perspective directions of further work on the researched topic.