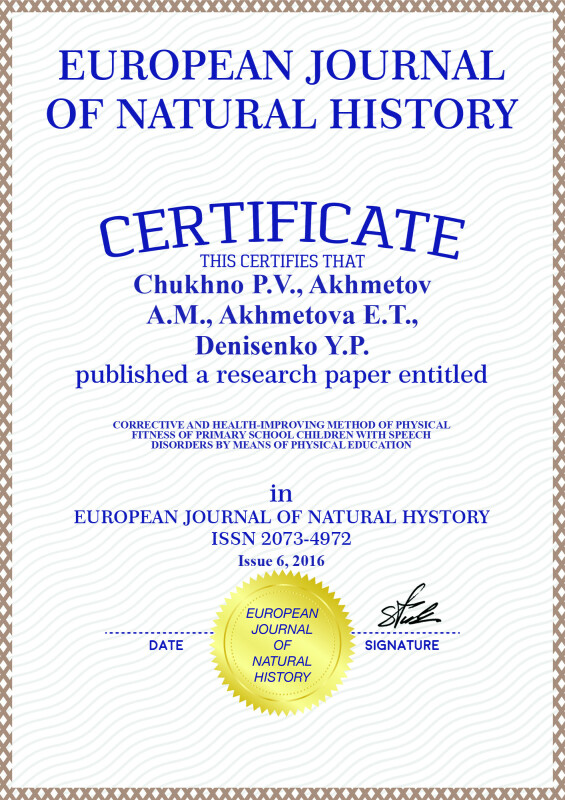 Article in PDF
209 KB
The article deals with the questions of correction of physical development and physical fitness of primary school children with speech disorder by means of basketball. In the article theoretical basis of the sections of the physical training programme developed by the authors which is primarily based on the elements of basketball is introduced; the results of the testing of this programme in terms of a pedagogical experiment are included. It is established that the use of corrective and health-improving exercise programme based on elements of basketball in the process of physical education contributes to the leveling of differences in the motor area of students with speech disorder (SD). The proposed corrective health-improving programme of physical education can increase the level of morphofunctional status and physical fitness of children with SD.
health maintenance
limited opportunities
general underdevelopment of speech
morpho-functional indicators
experimental programme
basketball
correction
primary school children
physical fitness

Health condition of children and adolescents is of much concern to specialists: physicians, teachers, psychologists and others. In recent years the number of primary school pupils with functional disabilities and chronic diseases has increased by 92 %. About 50 % of boys and 75 % of girls are not able to cope with physical test norms.

The Ministry of Health (2005) as well as the World Health Organization acclaimed a growing number of children with speech disorder. More than 30 % of children at an early age have speech disorder of various extent and severity. The percentage of the first grade pupils who suffer from speech disorder is 20–30 %. It is explained by a growth of birth in risk groups, harmful effects of the environment, lack of parental guidance, restrictions of educational opportunities.

It should also be mentioned that therapeutic-teaching diagnostics raised to a higher level and its methods and techniques allow to reveal and diagnose a pathology at early stages.

Specialists from many countries are searching effective programmes of rehabilitation for children with health deviations thus solving the problems of physical restoration, social adaptation, active involvement in life. The task is rather complicated and it requires complex scientific researches, coordinate work of medical specialists, teachers and specialists in physical education and sports.

Those with significant disabilities need special (corrective) teaching. As the object of teaching process the category of such children is various: according to the type of a disorder (mental disorder, speech, visual, hearing impairments), the age, the extent and structure of the leading defect, the cause and the course of diseases, medical prognosis, the presence of concomitant and secondary diseases, the state of maintaining functions, and other features [4, 6, 7]. More than a half of secondary school pupils need corrective-developing and health-improving physical education [1, 5].

In recent years the number of children with speech disorder (SD) is growing and it tends to the establishment of special corrective schools and supplementary logopedic classes.

As early as the XXI century the idea that SD is the consequence of disorder of the motion of speech organs emerged [6]. Speech disorders are various disruptions of speech of children with normal hearing and intellect but with underdeveloped speech system components. Yet the children with SD have individual peculiarities.

R.E. Levina and her colleques developed a periodization scheme of SD: from complete inability to speak (the first level of speech development) to extended forms of coherent speech with the elements of phonetic-phonematic and lexico-grammatical underdevelopment (the third level). The shift from one level to another is characterized by an increase of speaking activity, an appearance of new possibilities for speaking. An individual pace of a child’s progress depends on the severity of the primary defect and its form.

Speech disorder is one of the defects that essentially influence all aspects of life of a person. Physical education dominates in corrective teaching children with speech disorder because of two reasons: on the one hand, as many authors claim [8, 9], motor analyzer plays great role in the speech development, and, on the other hand, from the very childhood people with speech impediment are physically backward.

It should be mentioned that in many researchers’ opinion physical underdevelopment of children with SD is the consequence both of speech impediment and functional backwardness of motor analyzer and imperfect methods of physical education [1, 7, 10]. The analysis of various research works detected the problem of poorly developed methodological techniques in special (corrective) teaching for correction and development of morphofunctional status of children with SD.

A number of research works are dedicated to the study of using methods of physical education for teaching children with SD [1–7, 9]. Generally, exercises for children with SD of the III level are based on standard programme for healthy children with normal physical development.

The educational programme in physical training for pupils of special medical group in secondary schools designed [2, 3, 8] according to the minimum requirements of physical education and the level of physical development of primary school pupils doesn’t solve problems of corrective education for pupils with SD of the III level.

High static loads connected with a large amount of studies at school and at home negatively influence the development of primary schoolchildren with SD. At the same time it is stressed that movement is a biological need of a child [1], and this need unfulfilled influences the growth and the development of a child’s organism.

In relation to the mentioned drawbacks a search on more effective methods and conditions of rehabilitation of children with SD has been performed. Within the realization of individual approach it is preferable to use individual measurements of primary schoolchildren with the purpose of motivation for physical education, during the process of education as well. The fact that age and sex characteristics are important measurements that influence studying opportunities for pupils with SD, was taken into account. However, the existing secondary school system is mainly based on chronological age of children with SD. At the same time the specificity of physical development of children with SD of the III level, the state of locomotor apparatus, biological maturation and sexual development have an impact on functioning of the organism and is an important criterion of health.

At the beginning of the experiment complex researches on analysis of the dynamics of the major age-related morphological and functional features of primary school children with SD were performed. The idea that motivation for physical activity, the use of the elements of games and team sports [8–10] is one of the effective methods of rehabilitation of children and adults, was taken into consideration. In accordance with this, the aim of the research is an attempt to correct morphofunctional status of children with SD using elements of basketball. The above mentioned determined the necessity to develop and introduce new programme of recreative training for children and those with SD.

The proposed experimental programme is different as it is based on the course of teaching basketball and mastering the main sports techniques, because it is concerned that the main movement actions are developed at primary school age. The programme includes the following sections:

– a complex of exercises with elements of basketball;

– a complex of active games;

– a complex of exercises with elements of gymnastics with a fitball;

In the experimental part primary school children with SD who study at special corrective secondary school were involved. The participants of the experiment were divided into experimental and control groups, 24 people in each. Anthropometric and physiological measurements were taken according to standard methods.

For express-evaluation of somatic health of the pupils a complex of five morphological and functional measurements showing the state of organic vigor, stamina level and the incidence of diseases was used [10]. As the suggested measurements are taken in different units the valuation of each figure was formalized with points.

The following measurements (indexes) were calculated:

3. Skibinski index reflected the property of functioning of respiratory organs and blood circulation and the resistance of body to hypoxia.

4. The level of development of strength, speed and stamina are reflected in V.A. Shavalova’s index and indicated functional abilities of cardiorespiratory system.

5. The Ruffier test indicated the level of adaptive reserve of cardiovascular and respiratory system.

The results of the analysis in the groups under study showed that the dynamics of growth of absolute measurement figures in experimental group was much higher in comparison with control group.

These indexes are connected with the level of development of general stamina, aerobic energy-generating abilities and other measurements of physical development and frequency of respiratory diseases.

In general the results of the pedagogical experiment proove that physical education in the designed model of teaching process an the basis of experimental teaching programme positively influences the development of speech, improves motor skills, health and develops physical qualities of primary school pupils with SD of the III level.