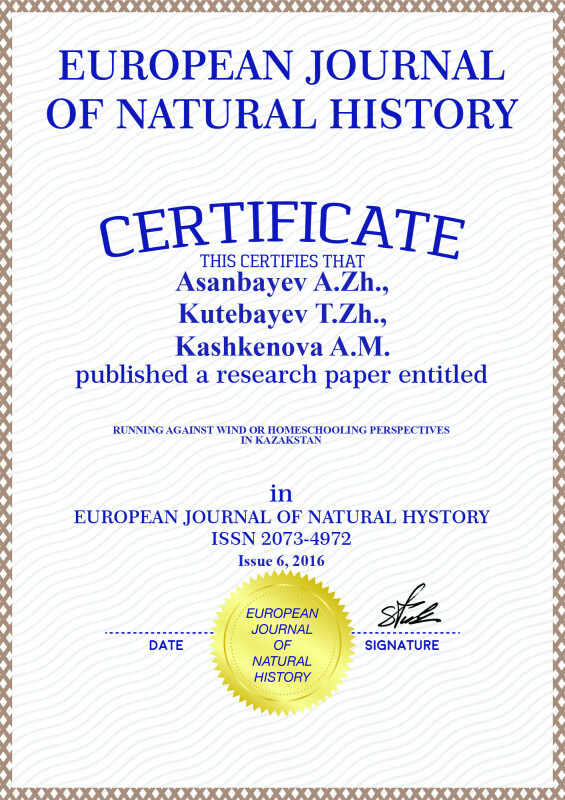 RUNNING AGAINST WIND OR HOMESCHOOLING PERSPECTIVES IN KAZAKSTAN

Homeschooling is becoming increasingly popular in Kazakhstan and what is it just a new fashionable tendency or necessity for people to choose it? Is homeschooling better alternative to a traditional school system in Kazakhstan? Parents provide several reasons to justify their decision of their having chosen this untraditional way. One of the causes is due to open boarders resulting an access to information. This access to the world experience in turn has changed people’s expectations towards school system a lot. About 30 years ago in Kazakhstan it was a crime even to dare thinking of alternatives to traditional school system since it was against the values of USSR, where everybody was regarded as the same and diversities were not accepted at all. As for school system, there were no alternatives to state schools even private ones. Every child used to get a secondary education on a compulsory basis therefore every parent was obliged to provide his or her child with it. The attitude towards school system has changed in the democratic Kazakhstan providing people consideration of other alternatives for various reasons. Parents started to challenge the compulsory school system by looking for other ways to educate their offspring. There are many reasons to support stakeholders’ arguments concerning homeschooling and they brought to the following statement. High expectations of parents towards their children’s education, religious attitudes and excessive care are the three causes to choose homeschooling as an alternative to traditional school system in Kazakhstan.

The term “homeschooling” or home education as it was defined in the “Encyclopedia Britannica” means providing education at home instead of sending children to schools or institutions. Speaking more broadly in “Privatizing educational choice: Consequences for parents, schools, and public policy” defined that Homeschooling in the USA is the most privatized form of education where families take responsibility to educate their children. It is usually organized in a such way that the process of children’s education is supervised by adults or family members, although often attracting people from outside. As it is seen homeschooling is the process of providing education at home by family members [4].

American supporters of homeschooling movement contributed a lot to emerging of the term homeschooling or home education. Actually it was a long way coupled with restless struggle to make the homeschooling legal and accepted by the society. Cooper and Sureau (2007) in their article “The Politics of Homeschooling New Developments, New Challenges” described that in detail. First, homeschooling community made a comfortable atmosphere for themselves: by constant challenging public policies and their impacts in courts. Second, they applied efforts into not only regulating the existing atmosphere but reminding the Congress and state legislatures about homeschooling society in order to escape discriminatory practices to homeschooled children. As a result, The United States Supreme Court ruled legal homeschooling in 1972 by recognizing that Amish parents have the right for their children not to attend public schools for religious reasons. The Court also ruled that according to the Constitution of the USA parents have the basic right to “establish a home and bring up children” along with the right to “worship God according to the dictates of [their] own conscience”. The combination of these rights is why, in the United States, the Supreme Court considers homeschooling as a fundamental right (Homeschool facts.com). After that victory the society started to broaden the scope of homeschooling involving other groups of children appealing to admit their needs legal too. Due to such movement it became possible for other children to be the subject of homeschooling. After all homeschooling is the form of education where children are not coerced to attend public or private schools conversely, they can get their education at home [6, 7]. Moreover, other researchers’ analyses suggest that homeschooling has become a popular educational locus in the late 1970s and since then the increased number of the U.S. families have engaged in political and legal action on homeschooling [8]. Additionally, the National Center for Educational Statistics (NCES) showed that the homeschooling rate of students being homeschooled has grown from an estimated 1,7 % in 1999 to 2,2 % in 2003 [10], and around 2,9 % of children, 1,5 million of the school age offspring in 2007 [9].

Homeschooling is banned by the law of Kazakhstan instead of cases with disabled children who cannot attend schools due to their health problems. Disabled children are the subject of the law on homeschooling provided availability of documents certifying their disability.

The experience that homeschooling is banned or not supported by the governments of some countries or it is the subject of constant disagreements has reasonable explanations. The fact is that traditional school system engages a large amount of people and enormous sums are allocated to this field. The perspective that more and more students are lost for the sake of homeschooling is the threat to the traditional system because it is the issue of big money. As Basham, Merrifield, and Hepburn in their article “Homeschooling: From the extreme to the mainstream” argued that homeschooling families spent about 4000$ a year per one child and the government allocated for public school spending about $9,644 per child in the USA. As it is seen public spending on traditional school system is higher more than two times thus homeschooled children save the budget of the USA. If the governments support the strategy of such saving money then the flipside of it is the growth of unemployment rate among people involved into school system which in turn can lead to social instability [3].

Every parent wishes the best fortune to his or her children and it motivates them to look for alternatives to traditional education system. In pursuing their goals they find themselves outside mainstream education. There are many causes leading them to some kind of differentiation but the most widespread are:

The first cause is connected with parents’ high ambitions towards children’s education. This problem exists not only in Kazakhstan but in the USA too. Parents think that one-on-one instruction to their children will guarantee higher academic performance. Ray found that homeschooled children showed better results on SATs and ACTs rather than those from public schools for several years. Preparation to tests requires both instructor’s and child’s attention on the material as well as clear instruction. Homeschooled children have advantage to get focused on the tests preparation and effective usage of class hours in comparison to public school children since one-one-teaching excludes interruptions and various misunderstandings. All these in turn lead to high outcomes and academic scores which can satisfy ambitious parents.

Parents’ excessive care intended to protect their children from the impact of the society is another reason for homeschooling. Some parents are taking extra caring to their children and they are afraid of spoiling them by other children. Parents’ assumption that school is the place where there is a risk to be spoiled by addiction to drugs or HIV disease etc. Basham, Merrifield & Hepburn showed that educating children at home helps to escape negative peers’ influence and even control children’s interaction with peers [4]. Thus, such measures will contribute to avoid premarital sex, drugs and alcohol usage. Safer learning environment is important due to the fact that some parents are even afraid to send their children to schools because of the accidents connected with shootings of school children. The risk to lose children and safety precautions are the reasons not to send children to public schools, thus, taking an alternative to public schools [2].

The researcher conducted three semi-structured interviews with open ended questions in order to have more explicit data. The questions were focused in such way that helped to answer the research question. All interview participants stated that there should be an alternative to a traditional school system in Kazakhstan. This alternative of choosing education system must be provided not only to parents but to children as well, it means their opinion must be taken into consideration. The participant B emphasized that parents can give a better education to their children than traditional schools where about thirty children in a class are being taught. In addition, she supported one claim of the Thesis Statement by saying parents can keep their children off the negative influence of schools and violence in them. The participant C suggested that homeschooling must be the subject of strict control and the state must be careful about “crazy cases such as religion”. The permission to homeschooling must not be provided to such people with religious attitudes.

Homeschooling can be a successful alternative to traditional homeschooling. There are several reasons why people choose alternative to traditional homeschooling. They are transitioning from traditional way of considering education (just accepting the available choice) to the western way of thinking (getting the best outcome, creating safe and special environment for learning such as religious, relieving parents’ worries about children in addition to secondary education). People are thinking not only of getting compulsory education but how this education will be conducted [1]. They are looking for the best option for their children that is not only to provide good education but also to make the time of getting it less troublesome with the accent to the future outcomes.