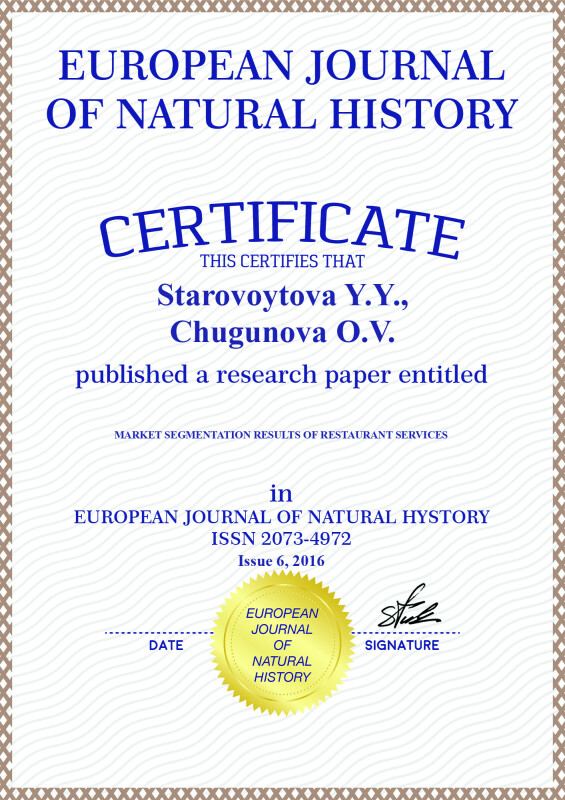 Urgent aims of Russian economy development are its diversification and reduction of the commodity exports dependence, GDP growth maintenance at the expense of non-extractive sectors. In modern economies, developed countries services sector plays a very important role, however, it is traditionally weak point for the Soviet Union and, subsequently, Russia. This leads to a number of negative consequences for the economy of the country, particularly, to meet the demand for services abroad, a tourist attractiveness decrease of the Russian regions. Service business fall into the category of small enterprises often. Therefore, a lack of competence in the effective management of such companies not only leads to a decrease in the quality of customer service, but also adversely affects the development of appropriate small business sector, which does not allow using their full potential in terms of various levels budget replenishment and job creation.

One of the most important service industries is the sphere of public catering. Qualified catering service is one of the essential factors of leisure time organization, contributes to the demand for localization services in Russia, preventing its appreciation abroad.

The study received 265 completed questionnaires, 234 of which have been recognized correctly filled in the verification procedure prior to data processing (completely filled and do not contain explicitly information contrary to common sense – that is, for example, when filling out questionnaires inebriated visitors). In the case of significant internal contradictions that profiles were also culled as the purpose of this study was to allocate identifiable relatively homogeneous segments precisely, consumers whose behavior models were settled, and which are capable to tell about their consumer behavior. However, since some visitors consider the research process fun and provide answers lightly, the percentage of rejected questionnaires was substantial.

In accordance to the research plan, individual interviews with seven industry experts (representatives of the restaurant industry) were carried out. As part of the interview, the clustering results interpretation based on the practical experience of industry experts were discussed. Also segmentation bases and special segments were identified, according to industry experts, and could complement the cluster analysis results in terms of the segments identification that are important from the making marketing decisions point of view.

Cluster analysis results interpretation together with the industry experts view allowed to identify the following segments and groups of segments (Figure).

The segments resulting after clustering results verification of industry experts

First of all, at the highest level there are two largest segments – “active” and “inactive” users the main feature classiffication of which is the frequency of restaurant visits (“active” users are those who go to the restaurant at least 1–2 times per month). They also believe that they are “well versed in the restaurants” and generally willing to spend more than inactive. They are also generally characterized by a well-established consumer behavior pattern, which is manifested, for example, a clear answer regarding the normal campaign purposes in a restaurant and situations of restaurant services consumption.

“Restaurant Enthusiasts” are a relatively homogeneous group of wealthy people who enjoy restaurants, due to the variety of situations and motives – from business meetings to the new culinary sensations search. They can afford to go to different restaurants and order expensive dishes.

“Restaurant Enthusiasts” were divided into two groups: “frequent visitors”, the characteristics of which are broadly in line “restaurant fans”, and a special group of “eat in the restaurant” – it includes mainly provided by middle-aged and elder men, who not only actively use restaurants for relaxation. They use it as a substitute for homemade food. In other words, they can afford to eat in restaurants. Note that this does not mean that these individuals do not eat at home, but at least sometimes, they are characterized by the restaurant services consumption in special situation as a simple home-meal replacement.

Consumers “with an average activity” cluster was more heterogeneous.

1. “Gourmet”. They visit restaurants alone by themselves (often – together as a small group) to try something new; they are fans of new culinary sensations. They haven’t such financial secure as active users.

2. “Cheap sit”. By the consensual respondents opinion of industry experts it is one of the largest segments in the survey. They are people who consider restaurants primarily as an opportunity to communicate in a pleasant atmosphere, and then as an opportunity to enjoy the gastronomic sensations. They often do not order a full meal, and eat 1–2 dishes, they do not tend to eat hearty. Often they are friends, especially girlfriends, or couples who come to talk firstly and pass the time, but not to eat. As a rule, people with secondary (low) income of all ages.

3. “At work”. The relatively narrow consumers segment who use the restaurant mainly due to the work need, for example, for business meetings. Note that the “frequent visitors” also use restaurants in connection with work, but for them it is not the dominant use of the situation.

4. “Leisure without saving”. People with different income levels. They visit restaurants not very often, but regularly and not seek to save. According to industry experts, this segment can be further classified into two more, depending on income level:

5. “Drinkers”. It is also narrow segment including people who love to drink beverages in restaurants. We note that the surveys were conducted not in pubs but quite respectable restaurants, so this “drinkers” segment should not be confused with customers of pubs, taverns, etc. In this case, they are primarily friends especially middle-aged and older men, well-being enough.

We have examined the segments included in the “active” group (Figure). Another spin-off from clustering a group of segments called “inactive”, which reflects the low frequency of visits by representatives of this group of restaurants. Within this group was able to identify the following segments:

Let us show the segments identified by experts that were obtained through interviews with industry experts (and which are “special” segments from the identification method point of view, the expert survey).

As can be seen from the Table, industry experts could be called a sufficiently large number of slots allocated on different segmentation bases. In conjunction with the segments derived from the analysis of primary data, an extensive restaurant list obtained can be used as a basis of its marketing policy.

The segments of the restaurant market, identified by experts

Thus, the problems related to the market segmentation and the target segment choice consist part of the marketing activities, known as the marketing plan. The restaurant market segments composition, which was presented above, requires the development of appropriate guidelines for the composition application in the process of catering enterprise marketing planning. In other words, the define of the restaurant planning marketing process with regard to the results of the present study previously obtained is to be done.