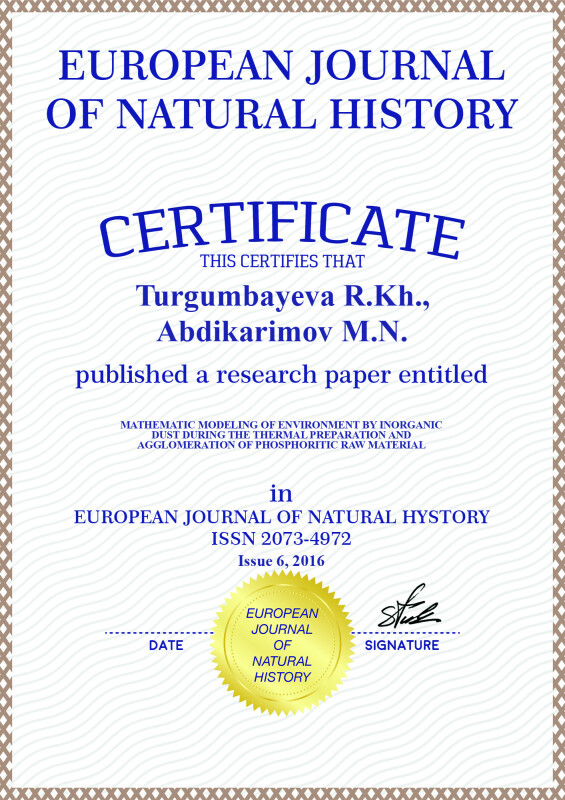 Article in PDF
523 KB
In this paper with the aim of quantitative evaluation of atmosphere pollution by inorganic dust have used Pasquille-Gifford empiric model. That model allows prediction of the degree of atmospheric air pollution at different emission capacities and to obtain the data on the distribution of polluting spray and determine the zones of danger for human beings. Two- and three-dimensional schedules of distribution of inorganic dust from department of thermal preparation and agglomeration of phosphorites in a ground layer of the atmosphere are presented in the article. The analysis of the obtained data allows evaluation of the degree of the atmospheric pollution by emissions of the industrial phosphorite processing enterprise and gives the opportunity to predict the pollution of surface air at various degrees of intensity of the inorganic dust emissions.
mathematic modeling
evaluation
atmosphere
pollution
environment
inorganic dust
phosphorites
emission
thermal preparation
agglomeration
phosphoritic raw material
ground layer

Results of ecological researches unambiguously demonstrate that pollution of the ground atmosphere – the most powerful, permanent factor of impact on the person and environment. Atmospheric air has unlimited capacity and plays a role of the most mobile, chemically aggressive and pervasive agent of interaction near a surface of components of the biosphere, the hydrosphere and a lithosphere.

The researches executed by many authors [1–9] proved that a number of atmospheric pollutants are transferred by air masses to long distances.

Studying of these processes in an explicit form by the organization of direct measurements is represented difficult. The sources of the polluting substances participating in transfer are emissions of industrial centers which form technogenic biogeochemical provinces, considerable by the sizes, with abnormally increased level of presence of the polluting substances at objects,

Now there are many various models which describe distribution of emissions of the polluting substances in the atmosphere. The majority of models finally are reduced to any analytical expressions or numerical decisions which allow to calculate fields of concentration of emissions depending on various factors, such as parameters of a source of emissions, weather conditions, etc.

In work the dust forming at the enterprise for production of phosphorus as a result of processes – shattering, sorting, thermical preparation, package materials of transportation was used atmosphere [11]. For carrying out calculations we have used the data on technical characteristics of the emission sources and averaged value of polluting substances emissions capacity of the enterprise in the conditions of its actual operation. Calculations were made by means of universal integrated suite MATLAB [12].

The phosphorus’ factories in Republic Kazakhstan are working on the phosphoritic rawes that contain not more phosphoric oxide (about 20 % Р2О5) and another components. The technological process production of yellow phosphorus is foresee preliminary preparation of raw: breaking up, classification, drying, the thermal’s preparation of phosphorus, agglomeration. During the transportation and therma’s destroying of phosphorite at the some time with gas components forms considerable quantity of dust. This dust have mechanical’s origin and have a great size of part.

It is important that independently of method of chemical preparing phosphorus of raw materials take place the same processes – destroying of carbonates, hydrocarbonates, phase transformations. The furnace gases at exit from the furnace content from 5 to 120 g/m3 of polydisperse dust. The dust is connected [10] with three bases processes are occuring in phosphorus furnace: the interaction at high temperatures of raw materials between itself and with reducing agent, evaporation of oxides and sublimation of fusible components, a mechanical breaking of mix material during their transportation in batchers.

On phosphorus enterprise of Kazakhstan formation of dust is the result of the processes – crushing, the sorting, the thermical preparation, the transportation batch materials (phosphorite, agglomerate, quartzite, coke) for the electrotermical treatment to the yellow phosphorus. This dusts are not need in blending and a simple make up the deficit fraction 0,5–0 mm in agglomix. Besides that they have in their structure P2O5 and a combustible carbon. Therefore it dusts can be used as add that harden agglomerate. Basic harmful emissions are dust of phosphorite, quartzite, coke. agglomerate, compounds of phosphorite and fluorine. Dusts of phosphorite, quartzite and coke thrown out to atmosphere together with dust of mix material, including dioxide of silicium under 20 %, identify as inorganic dust including SiO2.

The studies of real ecological situations on the basis of the data of control of the man-induced changes of the environment present one of the main tasks of engineering-ecological analysis of natural – technical geosystem.

At present there is no generally accepted method of evaluation of impact on the environment which allows characterization of an enterprise construction project as well as an enterprise activity in the period of operation. An unbiased evaluation of the system state rests on the group of indices, having a different physical nature and basing on different methods of measurements and control.

With the aim of quantitative evaluation of atmosphere pollution with inorganic dust we have used Pasquille-Gifford empiric model based on the assumption of constant interference-free point source of a definite capacity having homogenous characteristics of atmospheric dispersion. This model is based upon the conception of concentration of admixture emitted by a constant point source into atmosphere as of a stream with vertical Gaussian distributions and transverse to wind:

where q – admixture concentration in the given point of space, mg/m3; x, v, z – Cartesian coordinates, axis z – up-; axis x – downwind; Q – source of emission capacity, g/c; σy(x) and σz(x) – vertical and transverse dispersions of admixture cloud; u – wind velocity averaged for the layer of mixing, m/c; ff and fw – deduction for cloud depletion at the expense of dry deposition of admixture and its scavenging effective altitude of the source (i.e. altitude with consideration of the original rise of the overheated stream); h – effective height of a source, m.

Exponents sum in this formula corresponds to the ground surface not absorbing the admixture, in case of absolute absorption exponents the difference is observed.

The main content of the model is presented by numerous summarizing experimental data, specific functions  σy(x) and σz(x) and expressions for h, ff and fw.

Actually sources of emission are not exactly point sources, but for the purposes of simplification of mathematical description it is possible to assume they are. The nature of specification of the chosen model allows taking into consideration the peculiarities of local meteorological conditions and calculate the distribution of the pollutants concentration in current meteorological conditions at various values of emission capacity [3, 4].

Fig. 1 and 2 demonstrates two- and three-dimensional spatial dispersion of inorganic dust in the atmosphere. Emission source point corresponds to the coordinates x = 0, y = 0. It is shown that the inorganic dust spray is distributed over the whole territory adjacent to the plant gradually decreasing with the distance from the source of emission down to 0,35 fractions of maximum permissible discharge (MPD) at the range of 20 km.

Fig. 1. Two-dimensional dispersion of inorganic dust from department of thermal preparation and agglomeration of phosphorites in the atmosphere

The model allows prediction of the degree of atmospheric air pollution at different emission capacities and to obtain the data on the distribution of polluting spray and determine the zones of danger for human beings. Calculations for the emission capacity in the outlet of the conventional source equaling to 37,8 fractions of MPD demonstrated, that in the situation, close to calm at the distance up to 13 km the spray concentration exceeds MPD and in the residential area makes 0,75 fractions of MPD (Fig. 3). The department of agglomeration of phosphorites is throwing up in atmosphere smaller amount of inorganic dust by comparing with department of thermal’s of raw materials. Fig. 3 and 4 show that emission of the inorganic dust from agglomeration’s department in the atmosphere in circumstance be throwing up 7,0 MPD is decrease from 0,14 to 0,11 MPD at the distance 20 km.

Thus, the presented results of the calculation of the inorganic dust in the atmosphere using the empiric model of Pasquille-Gifford allows prediction the distribution of inorganic dust concentration within the area, i.e. allows to single out the sites of the contaminated area.

The analysis of the obtained data allows evaluation of the degree of the atmospheric pollution by emissions of the industrial phosphorite processing enterprise and gives the opportunity to predict the pollution of surface air at various degrees of intensity of the inorganic dust and other polluting agents emissions.

Fig. 4. Two-dimensional emission of the inorganic dust from agglomeration’s department in the atmosphere with the indication of areas of danger. On the curves the values of dimensionless total concentration of dust in the fractions of MPD are shown