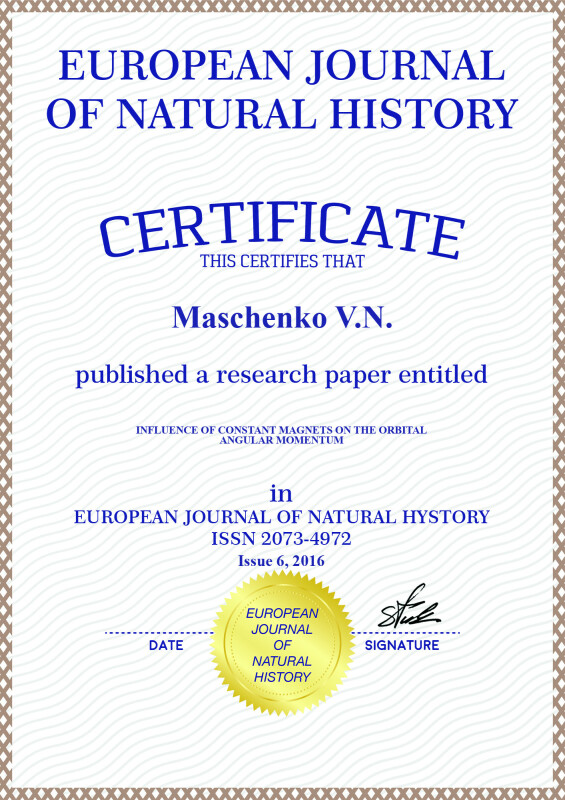 INFLUENCE OF CONSTANT MAGNETS ON THE ORBITAL ANGULAR MOMENTUM

Article in PDF
433 KB
The purpose of the article – the study of the effect of magnetic fields on the atoms of different natural elements. When making an atom in a magnetic field, the precession (change movement). This article will consider the introduction of an atom in two external magnetic fields of opposite poles.
magnetic moment of the magnet
the precession
the pole
the atom
the induction field
the electron

Fig. 1. The precession of the magnetic field

Estimated effect of external magnetic fields on the ground

When making material in a magnetic field with induction

on an electron moving in the direction of the orbital vector, torque acts on the part of the magnetic field

where g – gyromagnetic ratio. The ratio P of the electron charge to its mass;

– moment of the electron pulse

Precession of the orbital angular momentum of an electron in an atom manifests the appearance of additional orbital current directed opposite to the current I:

where S – area of the projection of the electron orbit in the plane.

The study was conducted under standard conditions. The object of the experience of taking the wet loam, soil category – 2. With a certain distance, the magnetic field effect on the loam. The total number of experimental tests for each distance – 40 pieces, except for the fifth position. There were five such provisions. In the first position of no change is happening because of the lack of a magnetic field.

Second position – this position is close to the targeted one another eponymous poles (Fig. 2). The result of this arrangement, the ground will be more cohesive

The fifth position – a position of the optimal arrangement of the magnets, as loam becomes the most fragile (Fig. 4).

If the magnet will have a length, a width and a height of 22,5 and 9 mm, respectively, the distance between magnets should be approximately Dm seventh of the length of the magnet.

Fig. 4. A position of the optimal arrangement of the magnets

Fig. 5. Diagram of the results of experimentation. % – the percentage of adhering soil relative to the total volume

Thus, these studies have shown the effectiveness of magnets in the correct placement of the panel.

And in general, it proved experimental way, the theory of the precession of the magnetic moments in a magnetic field. Such an arrangement is appropriate and effective in the field of cleaning. As a result of charting studies (Fig. 5).

Conclusions: With the use of magnetic elements can achieve many effects, thereby producing completely new action with the soil.