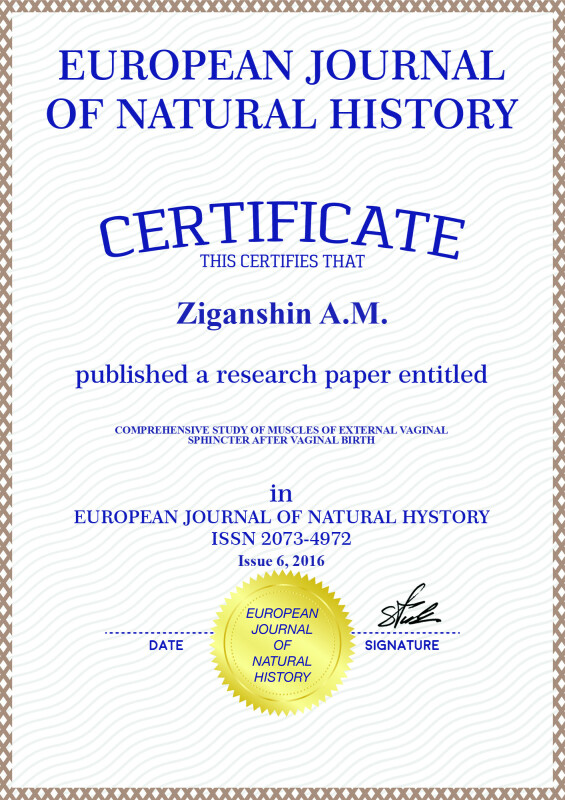 In recent time, there is an increase in the frequency of diagnostics of a genital prolapse, which firmly hold the 3rd place in the structure of the indications for surgery in women of reproductive age. [1, 2]. “Rejuvenation” of insolvency of the pelvic floor muscles is today one of the most urgent problems of modern gynecology, has medical and social significance [2, 3, 4]. One of the earliest symptoms, indicates the beginning of prolapse of pelvic organs, is a “gaping pudendal cleft” that occurs due to a defect of musculo-fascial structures of the pelvic floor [10, 11]. Gaping pudendal cleft develops after birth, due to loss of a fulcrum (center of the crotch) and divergence of levator muscles, when damaged m.bulbospongiosus (obturator muscle of the lower third of the vagina), performs the function of circuit vaginal sphincter [4, 11]. Vaginal sphincter has a complex regulation mechanism that is characterized by its ability as an arbitrary (volitional) and involuntary (tonic) contraction [5]. Tonic contraction sphincter promotes closeness of the genital slit, but it can be supplemented and arbitrary (volitional) contraction at maximum contraction. The combination of tonic and forceful contractions observed during orgasm, which leads to the formation of “orgasmic cuff” [9]. The amount of tissue injury crotch according to various authors ranges from 3,9 to 67 %, and not necessarily those injuries are diagnosed, and their further part remain undiagnosed [13]. Despite the large number of methods of surgical treatment of genital prolapse (there are more than 300) [1, 10], scientific papers devoted to the problem of failure diagnosis, and especially failure of the pelvic floor muscles, to date, very little. Available publications superficially reflect the problem of violations of the vaginal sphincter function. On the one hand – it is the lack of objective methods and the technical complexity of; other low efficiency and the impossibility of objective assessment. Existing imaging techniques for today: – computer and magnetic resonance tomography; clinical – finger stretching levator muscle, scale L.J. McKenzie, S.A. Carson, crotch index; Laboratory: Molecular Genetics, immunohistochemistry, the definition of the content of estrogen, elastin, fibulin, matrix metalloproteinases, solving many of the problems, is still not able to answer all the questions of development and formation of genital prolapse. In proctology in the selection of patients for surgical treatment for incontinence is widely used “gold (triple) standard” survey, including the sensitivity of determination, strength and ultrasonography of the sphincter of the rectum. This technique has not found its application in gynecology. The current diagnostic methods in gynecology are not able to objectively assess the condition of the vaginal sphincter than likely due to the high incidence of recurrence and complications (60 %) in women after surgical treatment for prolapse of internal genital organs [4, 5, 9, 13].

Purpose of the study. To determine the functional state of the external sphincter of the vagina before and after giving vaginal birth.

We observed 146 women, 82 – underwent a year ago, a normal delivery (study group) and 64 – primigravidas (control group). Inclusion criteria were: a history of some term normal vaginal birth; exceptions: a birth trauma diagnosed with genital tract and external genitalia. Analysis of clinical and anamnestic data revealed that these groups of women according to age and body weight were comparable. The examination included: pan-clinical (medical history, bimanual vaginal examination); functional – inspection of the external genitalia at rest and during straining, determine the sensitivity of the external genitalia; special – vaginotenzometric and ultrasound studies. The women at the time of the survey revealed no congenital and acquired diseases, traumatic injuries and diseases of the genital organs. Functional diagnostics of the external sphincter of the vagina was performed by three methods: the sensitivity of the determination of tissue included in the birth canal (the vulva), the definition of bulbocavernosus reflex; evaluation of power cuts sphincter of the vagina by computer vaginotenzometric research. Anatomy and muscle structure was determined by ultrasonographic examination. The sensitivity of the vulva agencies (large and small labia, clitoris) was determined by touch, pressure, pain and application. The results were evaluated as follows: the rate is reduced – (hypoesthesia), increased (hyperesthesia). Research of contractive force of sphincter of the lower third of the vagina, the main component of the external sphincter of the vagina, performed by computer vaginotenzometric study (CWTI). The method involves a device that allows to measure the force and a computer program to calculate the degree of failure of the vaginal sphincter. The device comprises a strain gauge, which allows to measure the effect type (tonic, strong-willed, maximum), and reduce the duration of the obturator muscles of the vagina [3, 6, 7, 8, 12]. Ultrasonography was performed ultrasound scanner ACCUVIX MEDISON firms with multifrequent vaginal probe, which allows to identify violations of the anatomy and defects in the structure of the vaginal sphincter. The results were compared with data obtained by V.I. Krasnopolskiy et al. [11]. Based on the sensitivity of the results, gauge and ultrasound studies determined the functional state of the vaginal sphincter.

The information processed by a computer program “BIOSTATIKA” by descriptive statistics. The differences between the compared values recognized significant at (p < 0,05).

Vaginotenzometric study of contractile ability in the study group showed: normal contractive force was observed in 38 (46,3 %), reducing the I-st degree in 32 (39 %), II-nd in 12 (14,6 %) women in the control group strength of contractions were normal. Comparison of the results of vaginotenzometric studies with clinical data obtained in determining the sensitivity and bulbocavernosus reflex revealed dependence of the degree of power failure cuts from clinical data. The results are shown in Table 1.

Ultrasonographic study of the state of the anatomy and structure of the obturator muscles of the vagina revealed that 36 (44 %) of women of the main group there was a discrepancy of muscular structures of the pelvic floor anatomy normal. After birth in the study group revealed asymmetry position tendon center of the perineum in 45 % of cases; uneven contours of muscle bundles in 26 % of cases; hyperechoic inclusions in the muscles and intermuscular spaces in 23 % of cases; the number of combinations was at 2,36 cases per woman. On the echogram women identified: reducing the height of the perineum tendinous center in 62 (75,6 %); narrowing of the vaginal obturator muscle in 58 (70,7 %); diastasis between the legs muscles in 46 (56 %) women, the total number of combinations was at 2,43 cases per woman. In the control group ultrasonographic parameters of height, width, diastase comply with the norm, which was confirmed in clinical studies and have absent gaping vagina entrance.

Thus, despite the absence of visible deformations on the skin of the perineum, as well as in the area of the external genitalia, cracks and fractures in women after normal delivery vaginally, at ultrasonography were determined: changes in anatomy and muscle structure, reducing power cuts obturator vaginal muscles during computer vaginotenzometric study. Comparative results and echographic studies vaginotenzometric women of both groups are shown in Table 2.

Comparative evaluation of the results of the ultrasound scan and computer vaginotenzometric studies revealed dependence of the force on the muscle contractions of the structure and anatomy of the muscle. Detection by ultrasound in the obturator vaginal muscles after birth vaginally reduce the height, width and appearance of diastase, can be regarded as a hidden risk factor, inevitably leading to a decrease in strength of the external sphincter contractions of the vagina.

Thus, the birth vaginally can reduce the sensitivity of the external genitalia, disrupt the anatomy and structure of the obturator muscles of the vagina, force reductions obturator muscles of the lower third of the vagina, contributing to the development of vaginal sphincter deficiency. The resulting labor violations anatomy and muscle structure, lead to a change of height, width and appearance of diastasis, which contributes to the further development of the development of irreversible changes, the loss of function of the obturator vaginal sphincter.

Carrying out complex study of the state of an external sphincter of the vagina after giving birth vaginally revealed a decrease in organ sensitivity, a part of the vulva, “hidden” anatomical changes in the anatomy and structure of the muscles of the perineum, the degree of failure of contractive force of vaginal sphincter at the stage of disorders of pelvic organs. Timely initiation of rehabilitation therapy and rehabilitation of the pelvic floor muscles in women after giving birth vaginally helps to prevent failure of the pelvic floor muscles in the future.