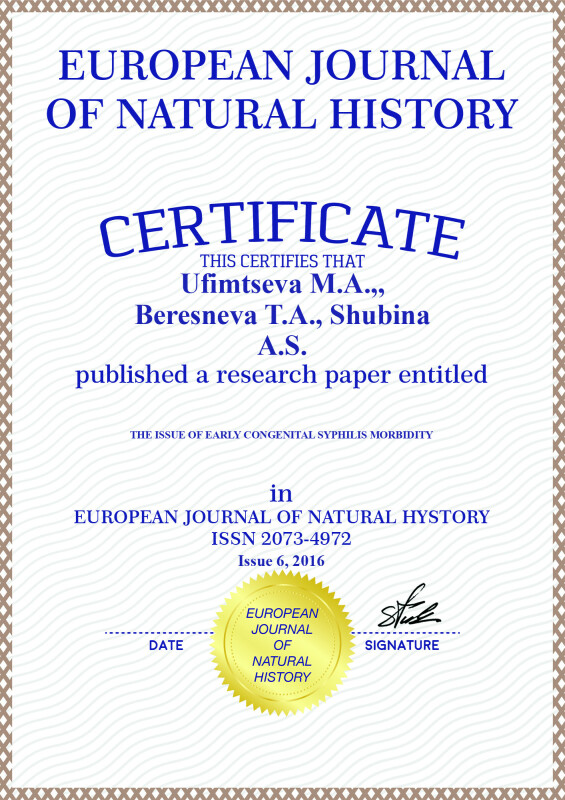 The health condition of mother and child is an actual problem for world health care. According to WHO experts, the damage caused by congenital syphilis is still underestimated, because of 270 000 cases recorded worldwide annually. Annual natal loses (460 000 per year) are closely connected to this infection due to miscarriage. Syphilis is a possible cause of 270 000 annual low weight children birth and 270 000 annual premature births (WHO, 2004) [1].

A review of researches (carried out in 70–80s of XX century) released by S.K. Hira et al. (1990) demonstrated a wide range of seropositive among pregnant women attending antenatal clinics – from 0,03 % in Scotland to 16,0 % in Brazil [16]. In WHO database of STIs prevalence and incidence researches the proportion of seropositive among pregnant women is as follows: in Africa – from 0,2 % (Burkina Faso) to 8,4 % (South Africa); in America – from 0,09 % (Guatemala) and 5,8 % – (Haiti); in Southeast Asia – from 0,8 % (Indonesia) to 2,5 % (Bangladesh); Europe from 1,5 % (Finland) to 1,7 % (Azerbaijan); in the Western Pacific – from 0,1 % (the Republic of Korea) to 7,1 % (Papua New Guinea). However, WHO experts believe that data from published studies has a number of drawbacks, including the lack of data from many countries, the predominant inclusion of the urban population and women attending antenatal clinics, also the small samples, as a result the data of seropositive among pregnant is underestimated [1].

During the period from 1993 to 1997, the time of maximum growth in the incidence of syphilis in Russia: in the Urals, Siberia and the Far East the incidence of syphilis among pregnant women increased 10,9 times, and their share amounted to 7,8 % of the total women with this diagnosis. The number of children with congenital syphilis in the region during this period increased from 33 to 268 cases (an increase of 8,1 times) [4]. The researchers note that one of the negative trends in the epidemiology of syphilis between pregnant women is the prevalence in this group early latent syphilis. So, during the pilot project held in Russia on surveillance for the registration of cases of congenital syphilis it was found that women, who gave birth to children with congenital syphilis, in 78,0 % of cases early latent syphilis was diagnosed.

The ongoing registration of cases of congenital syphilis is the mark of the medical care quality for the pregnant women, the state of public health and the indicator reflecting the level of cooperation between obstetricians and gynecologists, dermatologists, pediatricians, and the effectiveness of the disease control activities [10]. According to the authors, among pregnant women with syphilis, untreated or inadequately treated, there is a high incidence of fetal death or stillbirth [14]. Delay of the therapy leads to inadequate, late treatment and hence increases the possibility of fetal infection, increases the probability of miscarriage, stillbirth and birth of a child with a syphilitic infection [9].

Thus, the current epidemiological situation dictates the need for urgent and effective prevention of syphilis among pregnant women and newborns.

Currently there are drastic socio-economic changes worldwide, as well as in Russia, that result in the emergence of new nuclear groups, such as refugees, immigrants, the unemployed and vulnerable groups, including orphans and children deprived of parental care, which requires the development of new indicator values for analysis and adequate preventive measures, as well as the development and introduction of modern medical technologies [6, 7, 11, 12].

So, to improve the quality in industrial systems in 1931. V. Shihart proposed the scientific method, which he called a cycle plan – do – check – act (PDCA). The researchers believe that the improvement of the quality approaches have to be designed through a planning change (plan) the fulfillment of the plans (do) evaluation of the effect (check) and wide introduction in practice (act). The effectiveness of these approaches in the clinical practice was proved by many researchers [3, 8, 9, 13].

The analysis of published data shows that, despite of the numerous studies devoted to the problem of syphilis, they deal mainly tendencies of dynamics and structure of morbidity. At the same time the comparative studies, taking into account social change and geographical features of patients’ living and modern organizational strategies of prevention and control measures at the level of the federal subject needed to stabilize the epidemic. Research in this regard is of the socio-economic importance.