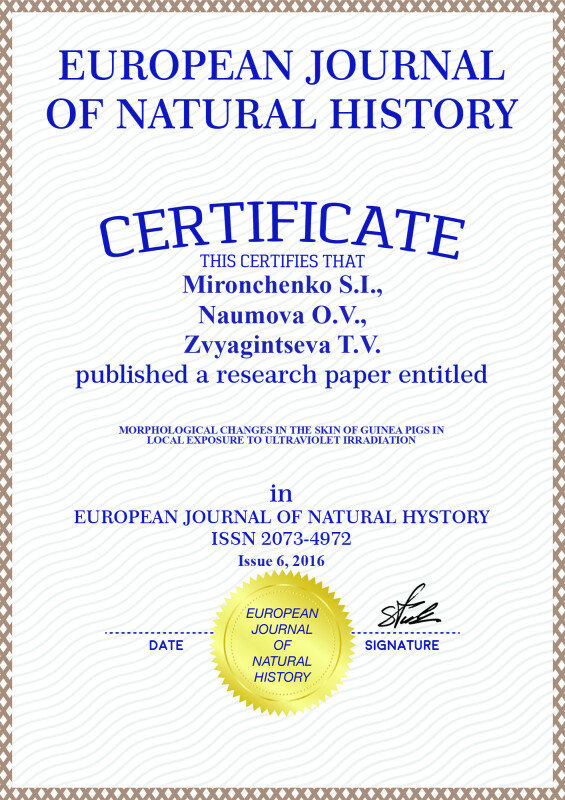 Article in PDF
201 KB
The study identified that the development of UV erythema (1 MED) in guinea pigs was characterized by inflammatory and degenerative changes in the skin, reaching the highest degree of severity on the 3rd day after the exposure. The detected injuries were characterized by morphological changes in the dermo-epidermal junction, leukocyte infiltration in the epidermis and dermis, destruction of collagen and elastic fibers. The development of apoptotic keratinocytes, i.e. sunburn cells, was one of the most specific morphological alterations occurring in the skin of guinea pigs when exposed to ultraviolet irradiation. Proliferative, hyperplastic and degenerative changes, as well as dystrophic ones persisted in the skin within the post-erythema period (the 8th day). Morphometric studies confirmed visual histological changes in the skin.
skin
morphological changes
morphometry
ultraviolet irradiation

Ultraviolet (UV) irradiation reaching the Earth’s surface mainly consists of UV-A range and a small amount of UV-B spectrum. The skin undergoes direct damage when exposed to ultraviolet irradiation (UV) [8, 9]. Excessive UV irradiation results in the development of a severe response involving all components of the skin [3, 8, 9]. Major changes in the skin caused by medium wave UV-B rays are observed in the epidermis. UV-B rays are responsible for the formation of burns, which in turn can subsequently cause skin cancer. Long-wave UV-A rays penetrate into the dermis, causing photo-aging and also play an indirect role in carcinogenesis [8, 9]. In this regard, it is important to provide a research on morphofunctional changes in the skin under the impact of UV-A and UV-B rays. Morphometric methods are an integral part of microscopic studies, giving a possibility to render an objective evaluation of the morphofunctional state of histological structures and identify the patterns of abnormal, compensatory and regenerative alterations [1, 3, 4].

The purpose of the study: to determine the pattern of morphological and morphometric changes in the skin of guinea pigs exposed to local UV irradiation.

The study involved 30 albino guinea pigs weighing 400–500 g. Erythema was caused by an exposure to irradiation in 1 minimal erythema dose (1 MED) of a shaved skin site using a mercury quartz irradiator OKN-11-M (UV rays A and B), placed at a distance of 10 cm from the animal, lasting for 2 minutes. In addition, the skin was shielded by a round plate with five holes with a diameter of 6 mm. The extent of the reaction was evaluated within 2, 4 hours, 3 days following the exposure until erythema disappearance in points for each spot: 0 points – no erythema, 1 point – distinct redness, 2 points – intense erythema. Then we summarized the intensity of 5 spots. The extent of the damaging effect was assessed by the intensity and duration of erythema reaction [7]. Control group consisted of intact guinea pigs. To investigate morphological pattern of changes in the skin after local ultraviolet irradiation the animals were decapitated under general anesthesia (sodium thiopental 60 mg/kg) at different stages of the trial (2 hours, 4 hours, 3 days, 8 days). Animal housing and experiments on them have been carried out in compliance with the requirements of international principles of the «European Convention for the protection of Vertebrate Animals Used for Experimental and other Scientific Purposes» (Strasbourg, 1985) and «General Ethic Rules for Conducting Experiments on Animals», approved by the First National Congress on bioethics (Kiev, 2001).

Skin pieces were fixed in 10 % neutral formalin with further excision of pieces of about 4 mm thick. The material was subjected to spirit processing and paraffin casting which was then sectioned in pieces of 5–6 µm thick. Survey specimens stained with hematoxylin and eosin were used to assess the overall state of the tissues under investigation. Weigert’s elastic stain with fuchselin followed by Van Gieson’s counterstain with picro-fuchsin was used to identify and differentiate the structures of the connective tissue [5, 6]. Morphometric study involved the evaluation of the following criteria: sunburn cells, leukocyte infiltration of the dermis and epidermis, changes in the collagen and elastic fibers, dermo-epidermal activity [1, 10].

Local exposure to UV irradiation resulted in the development of erythema in all the guinea pigs. In 2 hours after the exposure the total erythema score amounted for 4,8 points. The maximum severity was registered in 4 hours after the exposure when the overall intensity of 5 spots increased to 9,2 points. On the 3rd day the overall intensity of erythema was severe, comprising 7,7 points, with a subsequent gradual decrease and disappearance on the 8th day.

Histological study of the skin in intact animals showed typical features of organ structure. Morphological study showed disruptions of histological structure of guinea pigs’ skin on the 8th day after the exposure to UV irradiation.

Thus, 2 hours following the exposure histological changes were found to be minimal and characterized by slight exudative changes in the form of mild congestion and margination of leukocytes in the lumen as well as by the signs of dermo-epidermal activity.

Consequently, the integrity of the dermo-epidermal junction was preserved in all the specimens; however, the basal and spinous layers of the epidermis were shown to contain small foci of optically empty transudate in the intercellular spaces with separation of epidermal cells (spongiosis) and loss of cellular connectivity (acantholysis), which resulted in the formation of vacuolization loci in the region of dermo-epidermal junction.

Mean value of dermo-epidermal activity within this period of the trial comprised 0,33 ± 0,51, but it was not conclusively different from the indices identified in intact animals (Table).

Reticular layer of the dermis was formed by extensive fuchsinophilic bundles of collagen fibers arranged parallel to and at an angle to the skin surface, and their accompanying network of elastic fibers.

In 4 hours following the exposure to UV irradiation the skin was found to undergo discirculatory changes, morphologically manifested by severe congestion with swelling of the endothelium and edema of the derma, intercellular edema of the epidermis with loss of intercellular connections, vacuolization of the tissue in the region of dermo-epidermal junction and leukocyte infiltration of the derma.

Structural components of the skin underwent alterative changes, morphologically manifested by vacuolar degeneration and the development of apoptotically changed epidermal cells (sunburn cells) as a result of UV damage to nuclear DNA [8, 9], disappearance of epidermal macrophages, mild changes in collagen and elastic fibers of the dermis (swelling, enlargement and disruption).

Morphometric study showed that the number of sunburn cells significantly varied and comprised (1 ± 0) per 1 mm2. The study did not reveal any signs of leukocyte infiltration in the epidermis. Quantitative analysis also showed that the mean value of dermal leukocytes amounted for 0,5 ± 0,54, with the rate of changes in collagen and elastic fibers comprising 0,16 ± 0,40 and 0,33 ± 0,51 respectively. The index of dermo-epidermal activity constituted 0,5 ± 0,54. However, these morphometric indices of histological specimens were not conclusively different from the indices found in intact guinea pigs (Table).

On the 3rd day of the trial the skin was found to undergo significant histological changes. The epidermis slightly thickened due to an increase in the number of the rows of spinous cell layer to 2 or 3. The majority of epidermal cells of the spinous layer were shown to have signs of vacuolar degeneration; in all the specimens they included numerous sunburn cells, i.e. with pyknotic nuclei and eosinophilic cytoplasm. The latter were arranged singly and in groups of 3 to 4 in 2 specimens. Basal keratinocytes were located close to each other, with intensely basophilic nuclei of mainly vertical orientation. The specimens were also shown to have numerous mitoses. Epidermal macrophages were not detected. The stratum corneum was thickened, with areas containing surviving cells with nuclei (parakeratosis). The epidermis contained foci of small clusters of leukocytes in half of the specimens. All the specimens had signs of dermo-epidermal activity with the formation of areas of vacuolization and mild disintegrative changes in the dermo-epidermal junction in 3 specimens.

Swelling of the dermis persisted and consequently, collagen and elastic fibers, making up its structure, appeared dissociated. Collagen fibers were swollen and unevenly fuchsinophilic. Elastic fibers were thickened with sites of disruption. As opposed to the previous period, dermal vessels had lesser severity of congestion and dissociation of endothelial cells which line them. Regions around the vessels and accessory organs of the skin were filled with infiltrates of lymphocytes, macrophages, small number of tissue basophils and neutrophils slightly more frequently as compared to the previous period.

Morphometric data confirmed visual histological changes in the skin. Thus, average number of sunburn cells comprised 1,33 ± 0,5 per 1 mm2, which was significantly higher than in intact animals. Significant differences (an increase) between the intact and irradiated animals were also observed for such indices as the number of dermal leukocytes (1,33 ± 0,57), degeneration of collagen and elastic fibers (0,83 ± 0,40 and 1 ± 0), dermal-epidermal activity (1,5 ± 0,54). Furthermore, the number of dermal leukocytes increased relative to the previous period (4 hours) by 2,6 times, dermo-epidermal activity rose relative to the previous periods (2 and 4 hours) by 4,5 and 3 times, respectively. Mean value of epidermal leukocytes (0,5 ± 0,54) did not significantly change as compared with the normal range (Table).

On the 8th day of the trial (at the time of erythema disappearance) the study determined that exudative stage of inflammation changed to proliferative one. Microscopic examination of animals’ skin specimens showed thickening of the epidermal layer at the cost of the spinous, granular and horny layers. Increased proliferative activity of basal keratinocytes caused the development of hyperplastic changes in the epidermis, associated with degenerative alteration of epidermal cells and dyskeratosis. Moreover, the skin underwent a decrease in the severity of leukocytic and an increase in lymphomacrophageal infiltration of the dermis. The intensity of swelling of the dermis decreased as compared to the previous period, with a more consolidated arrangement of connective tissue fibers. Increased proliferative and synthetic activity of fibroblasts promoted collagenization of the dermis, changes in the content and structure of elastic fibers. Unevenly fuchsinophilic collagen and elastic fibers were thickened, the latter being focally disrupted.

Morphometric examination at this period of the trial detected neither sunburn cells nor degeneration of the dermo-epidermal junction, which was confirmed by a significant difference as compared with previous periods of the study. Leukocyte infiltration in the dermis (0,5 ± 0,54) was reduced by 2,6 times in comparison to the 3rd day. Leukocyte infiltration in the epidermis also comprised 0,5 ± 0,54, but was not significantly different from those of intact animals. Severe disruptions of collagen (1 ± 0) and elastic fibers (0 ± 1) persisted with their mean values exceeding the norm (Table).

Thus, exposure to UV irradiation caused inflammatory and degenerative changes in guinea pigs’ skin, which was morphologically manifested by alterations in dermo-epidermal junction, leukocyte infiltration in the epidermis and dermis, destruction of collagen and elastic fibers. The development of apoptotic keratinocytes, i.e. sunburn cells, was one of the most specific morphological alterations occurring in the skin of guinea pigs when exposed to ultraviolet irradiation.

1. Development of UV erythema (1 MED) in guinea pigs was shown to be characterized by inflammatory and degenerative changes in the skin reaching its maximum severity on the 3rd day after irradiation.

2. Within post-erythema period (the 8th day) proliferative, hyperplastic, degenerative and dystrophic changes in the skin persisted, as confirmed by morphometric data (which identified disruptions in the structure of collagen and elastic fibers).