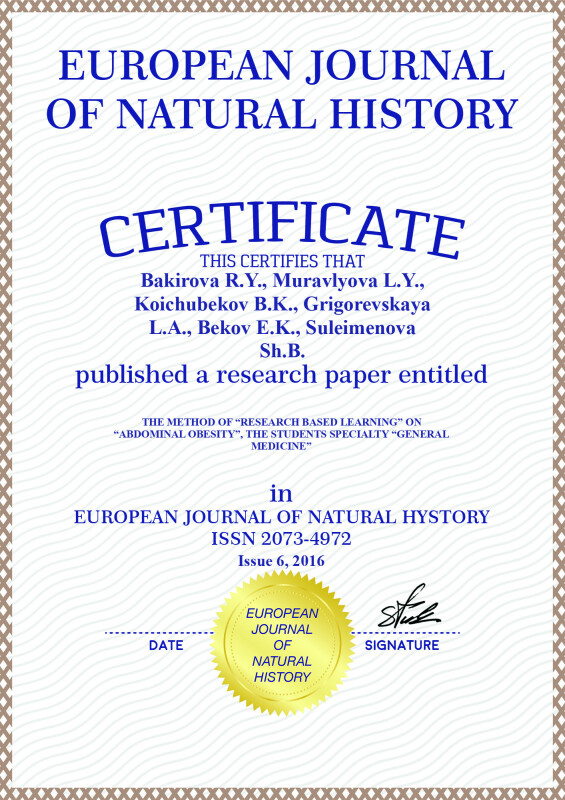 THE METHOD OF “RESEARCH BASED LEARNING” ON “ABDOMINAL OBESITY”, THE STUDENTS SPECIALTY “GENERAL MEDICINE”

At present, the degree of responsibility of higher education institutions for the quality of preparation of graduates of medical considerably increased. European Association for Medical Education, to which join and Karaganda State Medical University (KSMU), the dominant criterion of competitive medical examines the degree of mastery of their skills and manipulation, are directly related to the examination and treatment of patient [5]. Fundamentals of clinical examination of the patient lays on the Department propedeutics of internal deseases, taught in the third year of KSMU. The main objective of propaedeutics Internal Deseases is to train students the method of clinical examination of patients, basic laboratory and instrumental methods of research, semiotics of internal diseases, building syndromic diagnosis. Revealing of leading syndrome, the causes and the circumstances of its origin, the nature of the pathological process is based on the clinical competence of the future doctor [6].

In this regard, at the Department propedeutics of internal deseases introduction to the clinic KSMU alongside traditional teaching methods, use of modern technology to optimize learning and improve the quality of knowledge and practical skills of students. One of these methods is the method of teaching is based on research – Research Based learning (RBL). The priority directions of this method of training is to acquire students research work skills, teamwork skills. Our students annually win prizes in international student scientific forums held in our country and abroad. In solving the problem situations students activated their research and clinical reasoning, improves cognitive process osoveniya quality educational material, the student feels his intellectual consistency.

To carry out studies on RBL topic “Obesity” our technology has been selected due to the fact that the departments of propaedeutics of internal medicine and medical biophysics and informatics research grant has been received on “Correction of metabolic syndrome components biofeedback method in patients with cardiovascular risk patients”. Metabolic syndrome (MS) combines abdominal obesity, arterial hypertension (AH), diabetes mellitus (DM) or impaired glucose tolerance (IGT) and atherogenic dyslipidemia.

Obesity is the recognition by the World Health Organization (WHO) considered as non-infectious epidemic of the time due to its high incidence among the population at high risk of developing cardiovascular disease (CVD) patients early disability and premature mortality. In recent years, the prevalence of obesity has increased significantly in the world that allows us to speak about the “epidemic” of the disease. According to WHO, about 30 % of the world’s population are overweight, of which 16,8 % – women, and 14,9 % – men. The number of obese people, increases progressively every 10 years by 10 %. More than 1,4 billion adults and children are overweight or obese, of which 500 million are obese. According to experts, WHO estimates that by 2030 the planet will live 2,2 billion people with excess body mass index (BMI) and obesity 1,1 billion [9]. Given the prevalence of this phenomenon in the XXI century, coined the term «globesity», indicating the mass cases of obesity worldwide [7].

Development of hypertension with obesity is directly related to fluid overload, sodium retention, increased peripheral vascular resistance, hyperactivity of the sympathetic nervous system (SNS) and the renin-angiotensin-aldosterone system (RAAS), overproduction of leptin and hyperinsulinemia, leading to insulin resistance (IR). Recently it found that hypertension caused by obesity, correlates with increased levels of aldosterone. With obesity are all conditions for the development of endothelial dysfunction, which upsets the balance between the known vasodilator nitric oxide and potent vasoconstrictor endothelin-1. Recognized polygenic essential hypertension, which means the need to review not only as a chronic disease of high blood pressure (BP), but also as a complex set of inter-related hemodynamic, metabolic and neuroendocrine disorders [1–3]. Thus, obesity – a factor in the constellation of metabolic abnormalities that lead to the development of hypertension [8].

Thus, the combination ofhigh blood pressure, abdominal obesity (AO) and AG taking place in the concept of MS is currently in its medical and social significance, due to the high frequency and prevalence of continued growth, closely correlated with the development of cardiovascular events, it is one of the urgent problems of clinical medicine.

In the course of this research the students develop the skills of the clinical examination of the patient, carrying out scientific research skills. In connection with the above theme of this session is relevant and students took an active part in the search of literary material. In advance of the lesson, students were introduced to the theme of employment and worked the scientific literature.

The purpose of training on RBL method – to form students’ skills of research, teach methods for diagnosis of metabolic syndrome, learn to identify its major components.

– Determine the level of hypertension in patients studied.

– Determine whether the MS risk factors, namely, dyslipidemia, and hyperglycemia.

– To diagnose the metabolic syndrome in patients.

– Set the leading components of the metabolic syndrome.

The study included patients who were under observation in the clinic № 4 of Karaganda.

Patients with cardiac arrhythmias, cognitive disorders in the study were not included.

All patients had received advised consent to participate in the study. All surveyed were given full information on the ongoing investigation. To carry out this study was approved by the Ethics Committee of KSMU.

Metabolic syndrome was defined based on the IDF 2005 criteria for the year and the recommendations of the experts of All-Russian Scientific Society of Cardiology for the diagnosis and MS Treatment (2009) [4]: the combination of A Waist ≥ 80 cm in women and ≥ 94 cm in men with 2 or more risk factors (triglycerides ≥ 1,7 mmol/l and high density lipoprotein cholesterol (HDL-C) < 1,29 in women, HDL-C < 1,03 mmol/l in men, blood pressure ≥ 130/85 mmHg or taking antihypertensive medications, fasting plasma glucose ≥ 5,6 mmol/l).

Clinical and instrumental methods of research:

According to literature data, the frequency of occurrence of the metabolic syndrome is not the same in connection with various diagnostic criteria for MS. Thus, according to one MS prevalence among Europeans 40–55 varies from 7,0 to 36,0 % for males and 5,0 to 22,0 % in women. There are other data for Denmark, where the incidence of MS among men and women over 60 years the incidence of MS is 38,0 and 22,0 % according to WHO criteria, 1999. The prevalence of MS by IDF criteria in Singapore was 20,2 % and in India – 25,8 %. In the Asian region the smallest number of people with MS found in China, and the largest – in Turkey, with a predominance of women among them. In general, according to the literature MS prevalence increases with age, with the highest occurrence in older than 45 years.

According to the literature most frequently occurring component of the metabolic syndrome is also hypertension, which occurs between 43 and 77 %.

The results of our research on the occurrence of various components of MS coincide with literature data. Thus, according to the findings NHANES III the highest prevalence of MS among the components are visceral obesity, hypertension, and hyperglycemia, and the remaining components of the MS were less common. It is known that dysglycemia is one of the most common and dangerous components of MS, increasing the risk of cardiovascular disease by 5,2 times. In our study of carbohydrate metabolism disorders were 17 people that was 27,86 ± 5,74 % examinees. Among them, IGT is set at 11 people (18,03 ± 4,92 %), type 2 diabetes – in 6 (9,84 ± 3,81 %). The average fasting glucose among surveyed was 9,16 ± 4,52 mmol/l. The average values of C-peptide, cortisol levels were within normal limits. There was a hyperinsulinemia in 27,45 ± 6,25 % surveyed. Averages of fibrinogen amounted to 6,4 ± 2,5 g/l. Increased levels of proinflammatory markers in terms of fibrinogen and the C-reactive protein found in 21,57 ± 5,76 % of surveyed patients with metabolic syndrome.