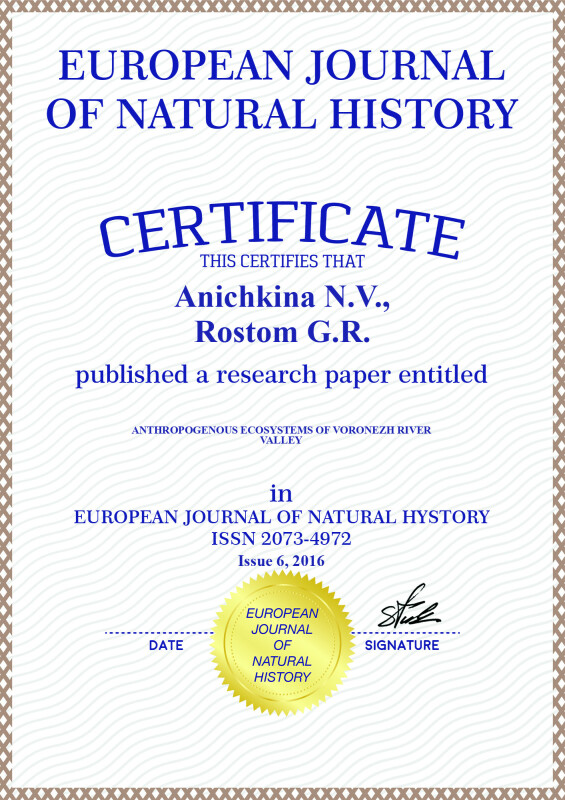 Article in PDF
213 KB
Ecosystems of Lipetsk – an the industrial city in the European part of Russia are considered. Ecosystems of the Voronezh river valley in the city boundaries of Lipetsk are compared – before and after reconstruction of the treatment facilities and the increase of investments into nature protection. Another issue is the influence of the reduction of fresh water consumption for the industry on ecosystems. At the same time the increase of industrial production did not stop. After the first stage of reconstruction the steel output increased for 11 %, but water consumption was reduced by 27 %, and dumping of industrial waters into the Voronezh river has decreased for 29 %. It is shown that despite of enormous anthropogenous load, the biological resources of the Voronezh river valley are still big. The natural system transformed by human recovers its natural functions as time passes.
ecosystem
city
sewage
metallurgical plant
treatment facilities
biological resources
Voronezh river
meadow communities

In the twentieth century natural ecosystems of the European part of Russia underwent enormous transformations in case of construction of housing and industrial plants. Growth of the industry resulted in concentration of the population in the territories close to plants and factories. The lack of knowledge of functioning of ecosystems led to environmental problems in these territories. Scientists noted reduction of specific variety, both plants, and animal in big cities.

The city system cannot function normally without using of water resources. Bad purification of household and industrial sewage led to pollution of reservoirs and underground waters. The territories of the cities turn into zones of ecological catastrophe. The city ecosystem begin to contradict with natural ecosystems. But the fact of the time characteristic is always ignored. Very few people consider a growing city as a young ecosystem. When environmental problems increase, at the same time the understanding and forming of ecological culture develop.

Lipetsk is one of the industrial centers of Russia. The metallurgical industry developed here for centuries, and in the 20th century the engineering, construction and food industries were added to it. Then there was a rapid growth of the population and environmental problems have appeared. Pollution of the Voronezh river by metallurgical sewage became one of the most significant problems. Pollution of water worsened ecological situation not only in the city, but also in the valley and in general all Don basin. At the beginning of the twenty first century the population of the city stabilized, the new generation of the managers with ecological thinking appeared. They began to implement nature protection technologies.

The Voronezh river is formed from the merge at the village of Nikolskoye in the Tambov region of two small rivers by Polnoy Voronezh and Lesnoy Voronezh. It is a typical flat river with a twisting course, with a slow current, numerous loops and bends. Has generally meridional direction. The water discharge at the city of Voronezh is 70,8 m3/second. Proceeds on the Tambov, Lipetsk and Voronezh regions of Russia. The river length is 520 km. The area of the basin is 21,6 t. sq.km. The right coast – high and abrupt, with deep ravines. The left coast is sloping and low, with abundance of small lakes. The river flows in a wide flood plain, its width is from 3 to 5 km. Average depth is 3 meters. On the left coast pineries, on the right coast the deciduous wood grow. It freezes-up since the beginning of December till the end of March. The high water is in March – April, the level rises from 2 to 4 m. In several kilometers from its mouth, near Voronezh, in 1972 a dike which formed the Voronezh water storage basin has been constructed. The length of the water storage basin is 30 km, the mirror extended of 70,1 km2, average width – 2,1 km, average depth – 3,5 m. The river Voronezh is one of the most polluted inflows of the river Don. Water of the river has the 4th class of pollution quality (“polluted”).

The examined site of the river Voronezh is located within the city of Lipetsk. The beginning of the site is 197 kilometers from the mouth, the end of the site – 217 kilometers from the mouth. Total length of the site – 20 kilometers. The examined site is a flood-plain valley, poorly twisting. The right slope is high and abrupt, left – low and flat. The left-bank is crossed by hollows, meander lakes, mainly meadow. In the period of a high water the flood plain is usually filled with water layer of 1–1,5 meters, maximum – 4 meters.

On the water mode of the river a great influence was exerted by the fixing threshold on the 207th kilometer from the mouth. The fixing threshold represents a deaf concrete dike which has raised water level in the river on 1 meter. The curve subtime has extended upstream the rivers to several kilometers. Water depth reaches 6–8 meters, width here – 100 meters. However, the water level raising in the river has led also to negative consequences: there was a ground water level raising in the adjacent territories, the inundated part of the city is constantly in the waterlogged condition, the bed of the river long time remains not washed out, here a large amount of polluting substances, especially from the urban area have formed shoals. The silted course is not able any more to pass flood waters. Annually there is a threat of flooding of an urban area.

Despite essential anthropogenous loading, biological resources of the floodplain of Voronezh river are large. Water meadows are used by locals for a pasture of cattle and procurement of hay. The ecosystem of the valley copes with this loading. There live foxes, minks, boars, otters. Biological diversity of birds is big.

Within the territory there are several ecosystems:

These fragments of inundated and meadow landscapes are most significant for preservation of biological diversity of fauna in the city line. Such fragments are dated for flood plains of the rivers Voronezh and Matyra.

The flood plain complexes differ in a considerable landscape variety: the river, meander lakes, bogs, backwaters, water meadows, bushes and the remains of the inundated woods. The most part of this territory is strongly boggy, grew with plentiful dense thickets of reed, cane and powerful osier-beds. Such structure of an inundated complex reduces anthropogenous influence and creates the good protective conditions favorable for continuous dwelling of many animal species. The conducted faunistic researches revealed a high specific variety of vertebrate animals of these territories (102 species). On these technogenic reservoirs (settlers of plants) stay of 78 bird species (12 – nesting is registered, the part of which belongs to group rare and being under the threat of disappearance). Settlers – the place of reproduction, a molt, wintering of many types the water birds. On thermal settlers of NLMK and Svobodny Socol plant more than 1000 individuals of several species of birds every winter. Here colonies of birds are located: (Sterna hirundo L.), (Sterna albifrons Pallas). Such group settlements create favorable conditions for reproduction of a number of species of the not colonial birds using protective properties of a colony for nesting.

Settlers of Svobodny Socol plant – an example of how the geosystem transformed by the person restores the natural functions as habitats of many animal species with age, at the same time continuing to carry out the technogenic functions.

Monitoring of waters in the territory of the Lipetsk region is conducted since 1959. Since 1999 the downward tendency of amount of the used fresh water from underground and superficial water sources remains.

From 2000 NLMK was succeeded to reduce considerably the use of water and to reduce negative impact from dumping of sewage. Consumption of river water has decreased by 66 % to 32,9 million m3 a year. At the same time NLMK has reduced the amount of production drains by 79 % to 13,2 million m3 a year, and dumping of the polluting substances with industrial drains to 2,4 thousand tons/year (80 %).

In 2009 the upgrade of system of turnover water supply of combine has been complete. NLMK has completely stopped dumping of production sewage into the river. At the same time consumption of river water has decreased by 3 times.

Lipetsk treatment facilities and their role in the river water protection

In 2000 the first stage reconstruction of the integrated treatment facilities begun. Investments into nature protection actions have increased almost by 6 times. It resulted in reducing specific emissions by 15,5 %, reducing water consumption by 27 % and dumping of industrial waters into the river Voronezh by 29 %. The amount of sewage in 2006 has decreased in comparison with 2005 and has constituted 166,97 million m3.

In 2007 “The Lipetsk station of aeration” has been created. In May, 2009 the station of ultra-violet disinfecting of sewage with a productivity of 220 thousand cubic meters a day has been put into operation. It has given the chance to refuse sodium hypochloride use. This substance kills harmful bacteria, but compounds of chlorine got to the river.

In 2009 NLMK has finished introduction of the circle water supply mode. It resulted in reducing dumpings of the polluting substances and improving the general ecological situation.

The extent of the impact of the society on ecosystems, in many respects, depends on the extent of industrialization of society. Estimating the impact of the human on the nature it is necessary to consider a time factor for which the damaged ecosystem can be restored. The system can even increase the specific structure as the changes introduced by the human can create conditions for involvement of new associates. Ecosystems in the territory of the cities can possess a larger set of components, than the country. In many aspects it depends on the time factor. We should get used to the thought that there is nothing stronger than the nature. Both the human, and the city systems created by him, are only small part of a global ecosystem of the Earth.