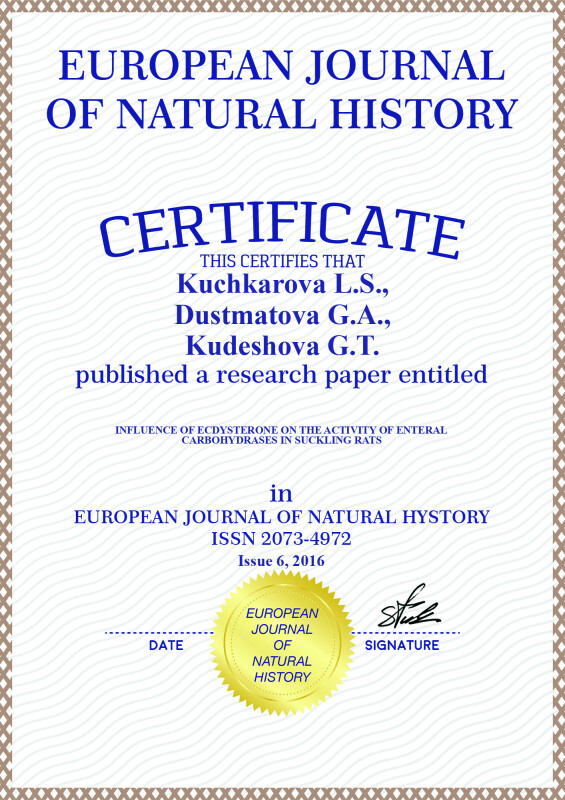 It was found that the development of intestinal carbohydrases is genetically programmed. In most mammals the activity of γ-amylase, maltase, sucrase of the small intestine is weakly detected at high lactase activity expression during of milk nutrition period.

By the time of the transition from milk to definitive nutrition γ-amylase, maltase and sucrase activity are significantly increased and lactase activity is sharply reduced [2]. Such developmental restructuring of the small intestine during the weaning, clearly correlated with an increase in plasma corticosterone level [3].

Based on the above, we have assumed that the plant steroids can also have a regulatory effect on the activity of intestinal carbohydrases.

The purpose of the research is to study the effect of ecdysterone on the activity of intestinal sucrase and lactase in suckling rats.

Experiments were performed in Wistar suckling rats. During the experiment rats were kept in the same cage with a nursing mother.

Ecdysterone was administered intraperitoneally to 10 day old rats in dose 1 mg/ kg. The animals in the control group were injected with an equivalent volume of saline. Rats were sacrificed by decapitation before the treatment and after 24, 48, 72 and 96 hours after injection.

After rat sacrificing the abdominal cavity was quickly dissected, the small intestine was removed, cleaned, washed with 10 ml of saline, weighed, filled with cold saline and homogenized with a Teflon pestle for 1 min at 1000 g. In obtained homogenate sucrase (EC 3.2.1.48) and lactase (EC 3.2.1.23), activity were determined by Dahlqvist (1984) [1]. Enzyme activity was expressed in μmoles/min/g tissue of produced glucose after substrate hydrolysis.

The results were processed using the Student’s t test.

The results on the effect of a single injection of ecdysterone to 10 day old rats on the activity of small intestine sucrase and lactase are shown in Figure.

Consequently, a single injection of ecdysterone lead to premature increase of sucrase activity in the apical membrane of small intestine epithelial cells in suckling rats. This increase in enzyme activity was not observed immediately after administration of the drug, but in a day later and then it was expressed at a high level.

Unlike sucrase activity, lactase activity in 10 day-old rats in the control group, as might be expected, was shown at a high level.

In the experimental group of animals lactase activity, involved in the digestion of milk lactose, no significant changed during the four-day observation.

Consequently, a single injection of ecdysterone leads to premature induction of α-glucosidases (sucrase) at the background of constant activity of β-galactosidases (brush bolder lactase) in rats during the milk nutrition period.

The data indicate that after an injection of ecdysterone population of mature cells, with high sucrase activity is increased in intestine of suckling rats on 48–96 hours of experiment. Consequently, ecdysterone as well as hydrocortisone plays a trigger role in premature of small intestine sucrase activity.

It should be noted that despite the induction of sucrase activity lactase activity not significant changes after the injection of rats with ecdysterone. This phenomenon, i.e. preservation of high lactase activity under the influence of ecdysterone and other stress factors [3] may play a biological role. Stability of lactase to various factors in general contributes to the survival of the growing organism. Saving lactase activity at a high level after ecdysterone injection plays a protective role, preserving the adapted to assimilate the milk carbohydrate enzyme in “pure” milk nutrition period from any influences.

Revealed sucrase “reactivity” and lactase “areactivity” on ecdysterone impact suggests the possibility of its using at intestinal sucrase deprivation of the growing organism to improve the assimilation of sucrase, and possibly other disaccharides of adult food.

1. Ecdysterone injection has specific effect on the activity of small intestine disuccharidases in sucling rats.

2. Ecdysterone injection causes premature increase of the enteral sucrase activity and does not affect on the lactase activity in suckling rats.