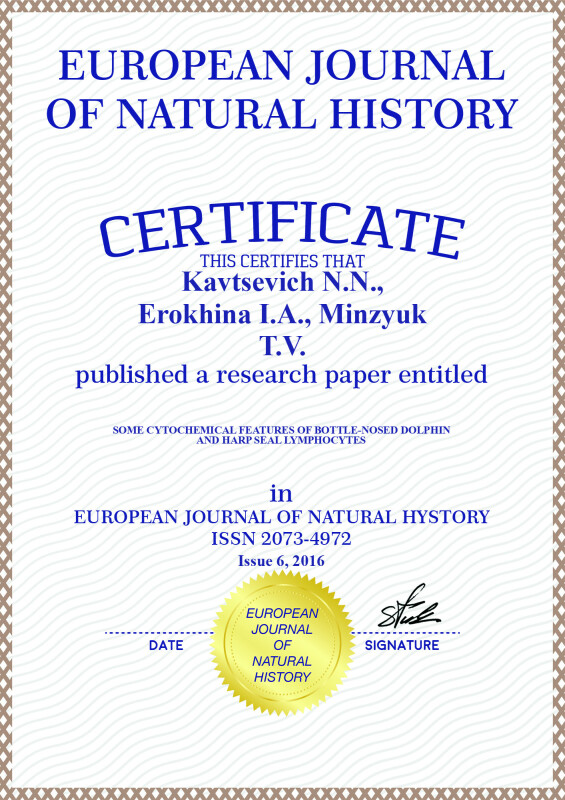 SOME CYTOCHEMICAL FEATURES OF BOTTLE-NOSED DOLPHIN AND HARP SEAL LYMPHOCYTES

Article in PDF
437 KB
Some results of cytochemical study of bottle-nosed dolphins and harp seals lymphocytes in captivity are presented. Composition of lymphocyte population by activity of nonspecific esterase (NE) and succinate dehydrogenase, number and strength of correlations of lymphocyte distribution parameters for activity of these enzymes and the number of glycogen containing lymphocytes are different in healthy, sick, adapted and nonadapted to captivity conditions dolphins. In seals during early stages of adaptation to captivity and disease were observed significant changes of NE activity.
marine mammals dolphins
harp seal
care in captivity
blood
lymphocyte cytochemistry

Evaluation of structure of lymphocyte population according to cytochemical signs permits not only to determine but also to predict the state of lymphoid system because metabolic reactions underlie immunologic processes. T- and B-lymphocytes of a number of land animals differ in activity of acid phosphatase, nonspecific esterase, dehydrogenases. At the same time coordination of hydrolytic and oxidation enzymes activity changing, certain correlation between lymphocytic groups with different cytochemical characteristics are necessary for effective development of immunologic processes.

Cytochemical investigations were carried out with the aim of finding possibilities to evaluate structure changing of blood lymphocyte population in cetaceans and pinnipeds occurring under influence of factors that exert on lymphoid system of wild animals in captivity. It is also possible that distribution of lymphocytes according to metabolic parameters will allow to consider from different points of view long-stated question [4] on evolutionary conditioned differences in immunologic reactivity of sea mammals and present-day land mammals.

In bottle-nosed dolphins and beluga difference among leucocytes by intensity of nonspecific esterase (NE) reaction is similar to observed in man [14] and monkey [9]. Activity of NE is highest in monocytes. Granulocytes are esterase-negative or show diffuse staining. Contrary to this, enzyme activity in granulocytes of seals proved to be high as in mink and polar fox [16].

Product of succinate dehydrogenase (SDH) reaction is concentrated in granules of identical size. Lymphocytic granula, in contrast to granulocytes, are larger. Their number varies significantly – from one to dozens of them.

In contrast to other leucocytes coloured diffusely, PAS-positive (periodic acid – Shiff reaction positive, i.e. containing glycogen) lymphocytes of dolphins contain granula, most often single, that seldom form exclusive circle around nucleus. There also occurs a special type reaction – in the form of large spots of rounded or irregular shape. This fact hampers accepted evaluation of intensity of reaction by points. Therefore we estimated only percentage of PAS-positive lymphocytes.

In seals PAS-positive lymphocytes were found only in two cases (one cell out of 100), while content of glycogen in granulocytes is significant. This fact is of interest as amount of glycogen in cells of other organs and tissues of seals (skeletal and heart musculature, liver, kidneys, brain) is great, higher than in land mammals [5].

Analysis of estimation results of cytochemical reactions in bottle-nosed dolphins carried out in four groups of animals: healthy; healthy adapted (kept in oceanarium for no less than a year); healthy nonadapted (from 2 to 5 months of life in captivity) and sick animals affected by respiratory and skin diseases. Mortality among dolphins is highest during the first six months in captivity and after a year mortality among captured animals decreases sharply [1]. This permits to expect essential differences in adaptive abilities among indicated groups of animals and associated cytochemical features of blood lymphocyte population.

Fig. 2. Correlations of lymphocyte distribution parameters according to NE and SDH activity and number of PAS-positive lymphocytes in different groups of dolphins

Highest correlation level of distribution features of lymphocytes is in healthy nonadapted animals. Correlation trend corresponding to processes that develop at lymphocyte activation: increase of enzymatic activity of lysosomes and mitochondria is accompanied by decrease of glycogen amount [8]. Intensified correlation between values of acid phosphatase and dehydrogenases activity was observed in some professional diseases [15].

During first months of captivity there develops a state in nonadapted bottle-nosed dolphins considered to be a pre-existing disease caused by increasing microbial contamination [3]. Judging by presented data, significant shifts in immune system are characteristic of this state manifesting themselves in intensifycation of accompanying activation processes of lysosomal and mitochondrial enzymes and utilization of lymphocytic glycogen.

To find NE in blood smears of seals two kinds of procedure were used: long (21 hrs) and short (2 hrs) periods of smear incubation in a reaction mixture. Two types of cells are distinguished among lymphocytes of seals, as in bottle-nosed dolphins and belugas too: those with paranuc1ear and those with granular reaction. When incubation period is short, part of lymphocytes show negative response and part of them show a positive response to NE (T-cells, supposedly). Relative number of the last ones in pups (aged about a month) that finished suckling, was 59,0 ± 4,3 %, that is close to value obtained for mature humans – 61 % [7]. On day 3 after being placed into oceanarium, pups showed an average decrease of esterase-positive lymphocytes comparing with intact animals. Value decreased still more by day 10 of animal’s stay in oceanarium when they survived their transportation by helicopter and were learning to feed on fish (Table).

On day 18 value increased reaching level in animals living in their natural environment. It is characteristic that while differences among individual cases on days 3 and 10 have low statistical authenticity (seals № 3, 4, 5) and in one case (№ 2) there was an increase in count of esterase-positive lymphocytes, differences among observed cases on days 10 and 18 were authentic in all cases (P = 0,99). By that time seals actively fed on fish, grew accustomed to room and baths where they stayed. After birth there occurs a sharp increase in number of NE+ lymphocytes in man [10], that is associated with formation of immune system, differentiation of T-cells. High number of NE+ lymphocytes in pups of harp seal during the first month of life seems to reflect those processes. On other hand, they show a high percentage of lymphocytes (53,0 ± 1,9) similar in their esterase reaction patterns to null lymphocytes and lymphocytes-suppressors. This agrees with view on inferior immunity of seal pups [2].

Having had pneumonia, a pup of harp seal showed changes in NE activity in lymphocyte population (Fig. 3). Number of lymphocytes showing paranuclear reaction to NE increased on recovery from 23,0 ± 4,3 % to 70,0 ± 4,6 %, and the mean number of esterase-positive granules decreased from 5,93 ± 0,54 to 4,15 ± 0,39, i.e. their values approached their level in healthy wild pups of seals.

Fig. 3. Distribution of harp seal lymphocytes according to number of esterase-positive granules: a – in active phase of disease; b – a week after start of antibiotic treatment; c – 4 months after disease signs disappeared; d, e – after subsequent 2 and 6 days; 6 – n overall distribution of lymphocytes in 12 wild healthy pups. On axis X – number of NE+ granules, on axis Y – % of lymphocytes

Thus, cytochemical features of lymphocyte population and, particularly, their correlating relationships can be used for development of quite sensitive criteria to evaluate the state of lymphoid system of seals and dolphins when adapting to captivity and when sick. Revealed peculiarities of blood lymphocytes composition by cytochemical features can be used to control flow of dolphins adaptation to captivity and its correction by drugs affecting function and metabolism of lymphoid cells. Degree of approximation of cytochemical parameters and correlations between them in adapting animals to those in healthy dolphins adapted can be used as indicator of adaptation level.