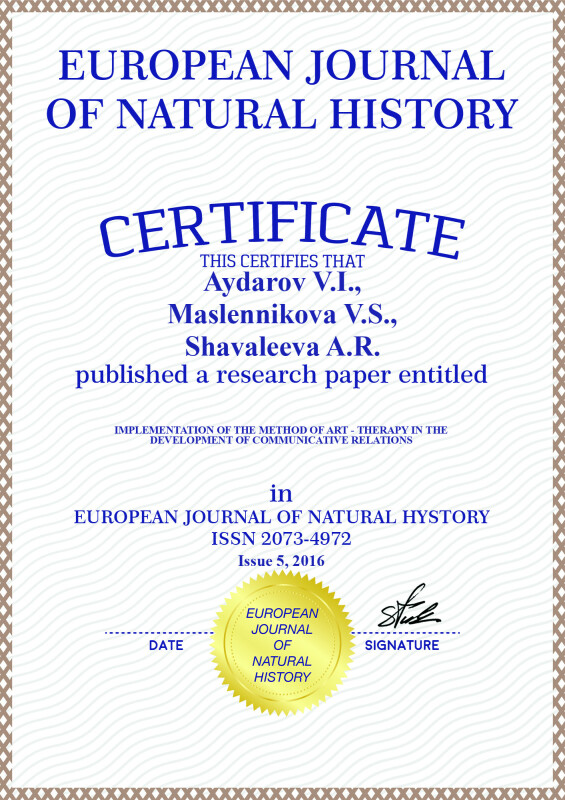 Article in PDF
196 KB
The author gives an original perspective on the art – therapy that is included in the segment of the many personal growth programs. This is a special form of psychotherapy based on the art and behavioral change in the client. Art – therapy is based on the basic position of psychoanalysis of Freud, according to which artistic images created by the customer reflect the processes in the unconscious of the author. Experiences are not superseded and sublimated into creativity, and through which there is an improvement of communicative relations, progress in therapy and further successful rehabilitation.
educational support
art – therapy
a synergistic approach
communicative relationship

An interesting history of art – therapy is a trend in modern psychotherapy. In the late thirties of the last century provincial painter from Great Britain Adrian Hill (Adrian Hill, 1895–1977) was treated for a very dangerous infectious disease tuberculosis. This disease were treated in those days for many months and even years. So, bored, he began to draw, making landscape sketches on paper that, to the surprise of the staff, greatly accelerated his recovery. Later Adrian Hill was invited to work of art – ducators with patients in private and public clinical settings, and he’s more convinced of the therapeutic efficacy izotvorchestva. Since the beginning of the fifties in America Adrian Hill was recognized and highly effectively implement already as an independent original method of teaching art – therapy for many physical and mental diseases. Today, art therapy is part of the segment in many personal growth programs. It makes it possible – to unlock the creative potential of the customer, to find the source of its vitality. This is a special form of psychotherapy based on the art and behavioral change on the client, improving adaptation abilities of the individual by means of spontaneous artistic activities. Art therapy is based on the basic positions of psychoanalysis by Freud, according to which artistic images created by the customer reflect the processes in the unconscious of the author. Experiences are not superseded and sublimated into creativity. Classical art therapy involves self-expression through various kinds of paintings, graphics, photography, sculpture. But today use other kinds of art: kukloterapiya, maskoterapiya, music, etc. The relativity of the concept of “therapy” gives reason for its introduction in the conceptual apparatus of psychology and pedagogy. The phrase “art therapy” in scientific and pedagogical interpretation is understood as a concern for the emotional well-being and psychological health of the individual, group, collective means of spontaneous artistic activity, which in turn leads to improved communication relations. The modern view of the literature on the art – therapy indicates that it is prefabricated concept that includes a wide variety of forms and methods of painting, drawing, sculpture, design, etc. The central figure in art – therapeutic process – identity of the customer, striving for creative self-discovery, to strengthen mental health, emotional well-being of harmonization, expand the range of its features. The basis of art – therapeutic process – is that the most important thoughts and experiences of the person easier to express in the form of images, rather than words (E. Kramer, M. Paumburg). In the process of art – the customer first therapy is in the role of “artist”, then it becomes a bystander. Over time there is a change of attitude, initiating a sensation of harmony and integrity of the image of “I”. Benevolent psychological atmosphere, the adoption of “artistic image”, regardless of its aesthetic value, positive attitude – the basic conditions for personal growth and self-knowledge, participants of the art – therapeutic activities. During the “lesson”, does not require previous experience in drawing or special artistic abilities, this spontaneous, arbitrary, “free sketches” that are not “wrong”, encouraged experimentation with a variety of non-standard representational forms and materials. Drawing, painting, working with clay, plasticine, making decorative objects, collages, creating compositions of various natural and semi-precious materials – all of this iconic work, and psychological patterns of development are the same (Vygotsky, Yu.L. Poluyanov). Art – therapy figuratively called “healing art”. Spontaneous activity is accompanied by pictorial therapeutic effects (psychological, emotional relaxation, psychoprophylactic, social and communicative). This is – a humane process, which is contributing to the socialization of the individual, it allows you to save your own unique, personal and cultural identity [1]. To give the fullest definition of art – therapy is difficult. Therefore, the definition would depend on the theoretical concepts and the field of applied professional activities, from specific to a particular national model of art – therapy and the degree of their professionalism. There are examples of different understanding of art – therapy.

Edith Kramer thought it possible to achieve positive effects primarily due to the “healing” capabilities of the process of artistic creation, giving the opportunity to express, to relive internal conflicts and, ultimately, resolve them.

Adrian Hill links the healing possibilities of graphic activity first of all with the possibility of diverting the patient from the “painful experiences”. Margaret Naumburg believes that a person as a result of artistic activities overcomes doubts about their ability to freely express their fears, acts in contact with his unconscious and “talking” with them on the symbolic language of images. Expression of the content of his own inner world helps a person cope with the problem. Thus, we can say that some of the scientists emphasize that artistic expression helps the therapist to establish with the client closer contact and get access to his feelings, the other – on the fact that the healing effect of art is achieved, primarily due to distraction from the sore and create a positive attitude, and others – on the fact that it is itself capable of sublimating his feelings and give vent to destructive tendencies. If we consider communication as a special kind of activity, it is necessary to agree with the well-known domestic social psychology that through communication activities organized and developed, including the system of “art therapist – client”. In this work by communicating not only organized, but also enriched, is enriched with all the complex and multifaceted communication process, there arise new connections and relationships between people. Main side communication function “complex and multifaceted process of interaction between individuals and how to process information, and how people’s attitudes to each other, and how the process of empathy and mutual understanding of each other” [2].

BD Parigin notes that this process can serve at one and the same time as the process of interaction of people with each other, and how the process of their mutual feelings and mutual understanding of each other. There are three main functions of communication: the exchange of information (communicative aspect of communication); the interaction (interactive aspect of communication); as the perception of each other (the perceptual aspect of communication). General purpose of educational activity is the formation of harmoniously developed personality, willing and able to carry out an objective system of social roles. The basis of the education system is a synergy, which is manifested in the interaction principles – psychological personality synergies, synergy of experience and synergy of interaction of the teacher and the pupil. It defines a new position of pedagogy: the effect of educational activity is achieved not by the influence and sinergetizmom educational interaction [3]. In our integrative personal-social concept of psycho-pedagogical support is synergistic principle acts as an integrator, and allows us to consider psychological and educational software to optimize the quality of life as a process that is largely self-organizing, not based on the direct cause-and-effect relationships, and flowing ambiguous; process due to a variety of internal and external influences; regular and random; predictable and natural, ordered and chaotic.

The term “synergy” is derived from the Greek “synergeia” – “commonwealth”, “cooperation” and focuses on the consistency of the interaction part in the formation of the structure as a whole. Synergetics is translated as “energy of the joint action” (from the Greek “syn” – “Accordance”, “together” and “Ergos” – “action”), founded by Professor Hermann Haken of the University of Stuttgart.

Philosophical Dictionary contains more detailed definition: “Synergetics – the modern self-organization theory, a new vision of the world to associate with the study of self-organization phenomena, nonlinearity, disequilibrium, global evolution, the study of the formation processes of” order through chaos, “bifurcation changes, irreversibility of time, the instability of both the fundamental characteristics of the processes evolution”. Some aspects of the theory of self-organization from an educational point of view is reflected in the works V.G. Budanova, V.G. Vinenko, V.A. Ignatovoy, E.N. Knyazevoy, S.P. Kurdyumova, L.N. Makarovoy, N.M. Talanchuka, M.A. Fedorovoy, Y. Sharonin et al. [1, 4, 5].

L.N. Popov noted that synergies can be understood as a kind of systemic approach as an approach to understanding the development of open nonlinear systems and a particular style of thinking. The basic concepts of synergy are “self-organization”, “transparency”, “non-linearity”, “disequilibrium”, “bifurcation” – branching paths of development, “fluctuation” – random deviation values, leading to a new structure of the emergence of “attractor” – a relatively finite, sustainable state of the system.

Conceptual and methodological novelty of the ideas associated with self-recognition of the ability of different systems to self-development is not only due to the flow of energy, information and matter from the outside, but also through the use of their internal resources. S.P. Firsova notes that in recent years has become increasingly noticeable interest from various fields of scientific knowledge to the methods and principles of self-organization theory. There is a multitude of adoption of relevant terminology in the area of humanities. This process is quite natural, since the general systems theory and Synergetics provides the methodological basis for a complete description of the study and any kinds of systems regardless of their nature, the forms of existence, the degree of complexity of the functioning [7].

At the same time, educational activities in art – therapeutic process is considered as a process of solving a large number of psychological and pedagogical problems. Since educational activity is defined as “a professional activity aimed at the creation of the pedagogical process, optimal conditions for education, development and self-development of the individual pupil and choice of free and creative expression” [4, 3]. Consider the essence of educational pedagogical activity in art – therapeutic process: In our opinion, it is that the art expert – therapy poses a pedagogical aims and objectives, and then transforms them into the client’s objectives, which clearly stimulates the activity, it causes a positive change in his personal development. This specialist in art – therapy, it is important to be clear about the changes that you need to call in the worldview educability the end of a certain stage of training micro cycle. This is possible by finding a specialist in art – therapy in a state of empathy when he sensitively perceives the mental state of the client, the nuances of his experiences, no doubt, his most subtle shades of meaning and emotional. Further, production of pedagogical problems must come from the relationship to the client as an active, equal participants in correctional and educational process that is likely to have its own logic of behavior or interpretation of the proposed image. Finally, the solution of psychological and pedagogical problems requires a specialist in art – therapy urgent action in professional situations, while their outcome is delayed in time and makes it difficult to monitor the success of the task. Our view on the educational support on the basis of synergetic paradigm art therapeutic process, different from the traditional in that it is not any arbitrary set of elements, and their system. The basis of pedagogical support system synergies, which manifests itself in the interaction of elements of psychological and psychological synergy personality, experience and synergies synergism interaction specialist in art – therapy and its customers, with a view to more effective treatments, and further successful rehabilitation.