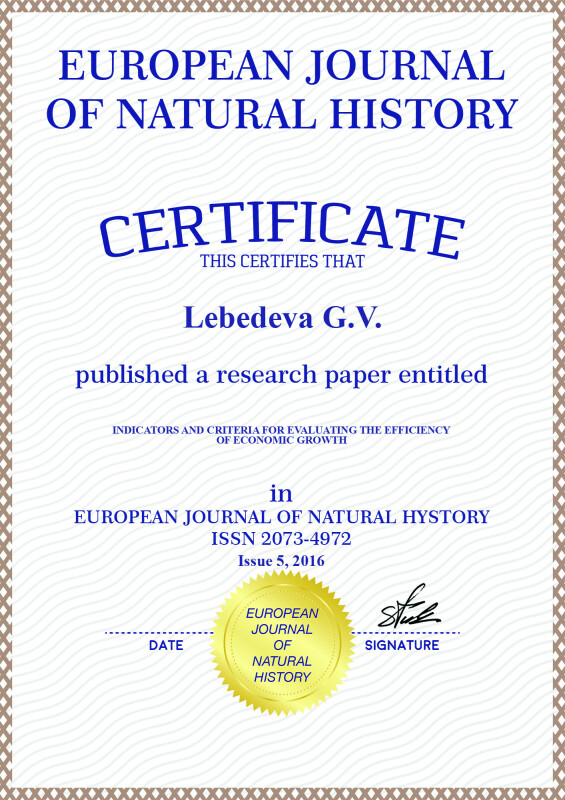 INDICATORS AND CRITERIA FOR EVALUATING THE EFFICIENCY OF ECONOMIC GROWTH

Article in PDF
204 KB
The article is devoted to problems of economic and social development of the Novgorod region. Consider the economic and social indicators of the region’s development in the dynamics of the Novgorod region is determined by the position in the national performance and indicators the North-West Federal District, presents the main socio-economic indicators of living standards in the area.
socio-economic indicators and indicators
average per capita income
nominal and real income
consumer price indices and industrial production
economic growth

Economic growth in Russia, its past, present and future are one of the most important topics in the discussions of politicians and scientists. This is a problem because the intense economic growth is the basis for improving the welfare of the population and the condition for reducing the income differentiation. The economic potential of the country is growing at the expense of increasing the number of inputs, improve quality and improve methods for their production. In this case we are not talking about copying already passed developed economies stages of economic growth, but the speedy elimination of the gap in terms of living standards, economic efficiency and other indicators of the quality of society. Besides, the growth process in nature is not stationary, and catch-up growth should take into account the change in time of the situation. Strategic objectives embedded in the global economy, the return position in the intellectual sectors of the market, reducing the gap in the living standards of the population also suggest high rates of economic growth and stability.

The problem of economic growth is one of the most important for the Novgorod region. Table 1 presents some of the data that characterize the proportion of the Novgorod Region in the national key socio-economic indicators.

Analysis of the dynamics and factors GRP Novgorod region for 1998–2013 years has shown the role and place of the Novgorod region in the formation of Russia’s gross domestic product. For the main economic indicators in the occupied area of 2003 8th place in the ranking of the North-West Federal District. These statistics on the Novgorod region has shown sustained economic growth: Increase in GRP with 9,4223 billion rubles in 1998 to 39,066 billion rubles in 2003, GRP growth rate has averaged 34 %. This is in no small measure contributed to the favorable investment climate, strengthening of industrial capacity, administrative support for the agricultural sector and small businesses [3].

The per capita income in 2011 accounted for 236,000 rubles of GRP, which is higher than 2010 by 35,7 thousand, or 17,8 %, lower than the average Russian indicator by 80,6 thousand or 25,5 %. Among the North-West Federal District region on this indicator ranked eighth, ahead of the Republic of Karelia and Pskov region.

The share of the leading basic economic activities (agriculture, mining, manufacturing, power generation and distribution, gas and water, construction, transport, retail) in 2011 accounted for 70 % of gross value added (in 2010 – 68, 5 %).

Specific gravity of the Novgorod region in the national key socio-economic indicators [7, p. 14]

Currently Novgorod region ranks 7th in the Northwest Federal District on the fertility rate, 9th place – at a rate of mortality, 3rd place – on the growth rate of real money incomes of the population, 5th place – on the growth rate of real gross wages and salaries, 4th place – Commissioning residential buildings in the 1000 population, 3rd place – density automotive expensive public paved, place 2 – the index of investment in fixed assets [8].

The place occupied by the Novgorod region in the national socio-economic indicators are presented in Table 2.

The place occupied by the Novgorod region in the national socio-economic indicators [7, p. 15–16]

The main economic and social indicators of the RF subjects, according to the methodology of Rosstat, include the following indicators: industrial production index, consumer price index, the average monthly wage, per capita cash income. Also on the subjects of the RF analyzes operational data on the volume of shipped goods of own production by economic activity, the production of major products, livestock production, livestock, commissioning of the housing, the volume of retail trade turnover; information on consumer price indices, average prices for goods and services included in a social set list of financial performance of large and mid-sized organizations, investment performance, per capita income, the average monthly wages and wage arrears.

In the analysis of socio-economic indicators of living standards of the population of the Novgorod region (Table 3) it is clear that for the period under review saw an increase in the nominal income of the population.

In 2005 compared with 2000 per capita cash income per month increased more than three times. Growth in real disposable per capita income for the same period amounted to only 10,1 percent. The maximum performance of real income growth recorded in 2006 and 2008, the minimum – in 2011.

During the entire period of growth of nominal income grew faster than real, and in general for 12 years, the nominal per capita income of the population of the Novgorod region grew by almost 11 times, and real – in 2,2 times. Average monthly wages increased in the analyzed period by 12 times, while real wages – in 2 times. And even in 2009 it was observed a decrease in comparison with 2008.

One of the most important indicators of the above appears to the consumer price index, a main gauge of inflation, has a direct impact on economic growth, and especially relevant in today’s conditions [2]. Increased inflation in 2015 as compared to the year 2014 and noted in the whole of the Russian Federation (108,5 % vs. 104,8) and the North-West Federal District (hereinafter – Northwestern Federal District) 108,6 % versus 105,3 % [9].

Consumer price indices in 2015 in Russia and the subjects of the North-West Federal District (in %, June to December of the previous year)

The cost of a conditional (minimum) set of food products, as is known, the difference reflects the consumer price levels of staple foods in the region.

According Novgorodstata, in the Novgorod region in 2015. The value of the contingent (minimum) has developed a set lower than in the North-West Federal District and its subjects.

In January – May 2015 average per capita income of the population of the Novgorod region, according Novgorodstata amounted to 23 107,7 rubles, which is higher than the corresponding period of 2014 by 12,8 %. Real disposable per capita cash income for the period decreased by 3,3 %.

According Novgorodstat [9], as compared to the year 2014 in the Novgorod region saw an increase in the volume of production of industrial and agricultural products, construction works and housing construction, wholesale trade turnover. However, the decreased turnover of road transport and passenger public transport, the retail trade turnover, catering, paid services to the population, reduced real wages of workers. Raised levels of unemployment and crime.

Main indicators, characterizing the results of economic activity in the Novgorod region in 2015

Рroduction of products of the agricultural economy Index of all farmers (agricultural organization, peasant (farmer) farms and individual entrepreneurs, private households) amounted in 2014 to 114,8 % in 2015, higher than the previous year.

Significant growth was achieved in construction: scope of works performed by kind of economic activity ”Construction”, amounted to 55,6 billion rubles, an increase by 2014 to 43 % in 2015.

The cost of a conditional (minimum) set of food per person per month for the region has increased since the beginning of the year by 12,1 % and amounted at the end of December 2015 3685,43 rubles.

Increasing the level of prices would not affect the change in the standard of living. In January – November 2015 average per capita income amounted to 24500,4 rubles, which is higher than the corresponding period of 2014 by 8,8 %.

The difficult situation on the labor market of the Novgorod region is caused by the above indicators of reduction of production volumes in a number of industries. Negative trends are compounded by unfavorable demographic situation.

Thus, economic and social indicators of development of the Novgorod region show the need for an active social and economic policies aimed at increasing economic growth and improving its sustainability.