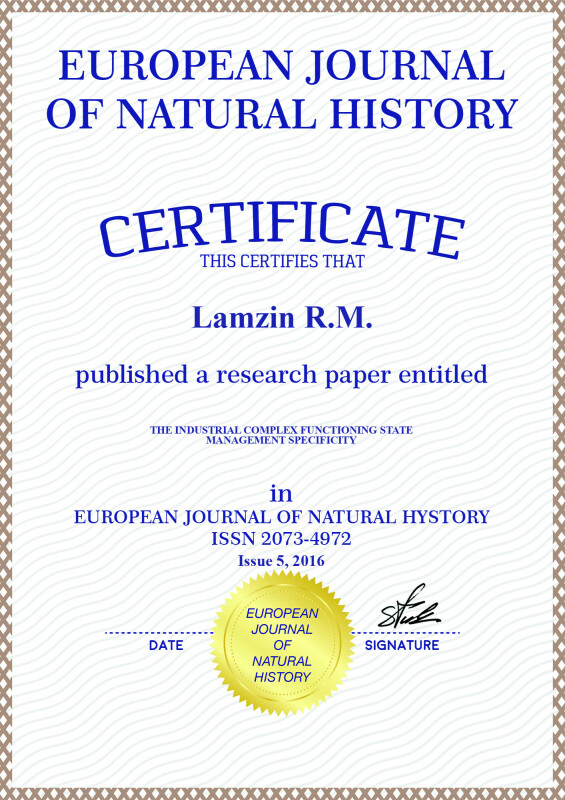 Article in PDF
194 KB
The research presents a view on the participation factor of state power in the industrial production development. The research author underlines that it is necessary for the state to regulate the industrial system in terms of market instability and production modernization problems. The research author concludes that effective budget financial policy is to be elaborated on the federal and regional levels in order to provide production comprehensive transformation according to the contemporary economic requirements.
interference
state management
industry
human capital

State interference is the active influence on all human life spheres, which is especially important in terms of a socio-economic crisis. In particular, such interference is of great importance for the industrial policy of a state. This is determined by the rapid increase of requirements to domestic and foreign markets’ competitiveness.

Secondly, the regulation of production in industries with high risk of formation of monopolies (e.g. in the field of electricity, transport and communications, and so on.).

Thirdly, the adjustment of the adverse social effects of the market economy, which is connected with the growing social inequality in living standards decreasing opportunities to get the necessary goods at set prices [6, p. 33].

1) the continental model, which is closely associated with the principle of a certain dependence of the economy from the government (this model is typical for France, Germany, Italy, etc.);

2) Anglo-Saxon model with the recognition of the principle of non-intervention in the economy (its elements are implemented in the US and UK).

The basis of effective state economic policy is the financial system, which consists of budgets of different levels within federalism (in Russia – a federal budget and budgets of subjects of the Russian Federation) and decentralized financial resources at the disposal of state-owned industrial enterprises and organizations. The process of these funds’ use state regulation is one of the most important instruments of industrial policy in a situation of maintaining the principle of economic processes based on public-political influence.

Increasing the level of public investments is determined by various situation factors on the state’s territory and foreign affairs situation. These factors include the military (raising the level of military production), economic-economical (the presence of relatively uniform development of the set of economic sectors and different types of production depending on market demand) and social (orientation on the situation in the society, with the production of consumer goods and high-quality products food) [6, p. 34].

1) the cost of the armed forces, law enforcement with the necessary increase in production of modern weapons and technology (in this case, there is improvement of the structure of the military-industrial complex, with its methods of regulation);

2) expenses for the satisfaction of social needs in the form of increased production of socially popular products with the development of agriculture and peaceful destination products. The priority of the second species is closely related to the strengthening of the foundations of an economic system of post-industrial society, as is the social orientation of the expansion and progress of industrial activity.

State function of stabilization of the market economy can be effectively carried out with the help of fiscal policy basic elements (often regarded as constituent elements of industrial strategy of the state, although it is one of the most important conditions for successful industrial control). These elements include a certain course of the budget regulation (to ensure a balance of financial income and expenses) and monetary regulation (lower inflation, regulation of the internal volume of currency). The use of such tools is necessary to overcome the production slowdown and falls in unstable market processes.

Considering foreign experience of government interference in industry, we can view Taiwan’s economic strategy – economic stimulus plan of 2005 intended for attracting the investments in infrastructure projects through collaboration between the government and private manufacturers and for providing favorable conditions for small business lending.

At the same time modern economic “locomotives” are created (for Taiwan it was industrial production of semiconductors and liquid crystal displays) [5, p. 90], that will be in demand on the basis of maintaining production high quality. The implementation of output is closely linked to effective advertising brands on the market.

Strengthening linkages between industry, educational institutions and research institutions provides for the establishment of joint projects in applied research. These surveys should be directed to the development of modern technologies of work organization and the use of existing equipment in the workplace [1, p. 103].

It is possible to note a number of strategic guidelines to the construction of modern industry while ensuring the social orientation of the economy and the strengthening of economic relations between producers and consumers:

1) expansion of the cluster approach in the implementation of the industrial policy to strengthen inter-sectoral linkages;

2) identification of promising industries that could become drivers of growth of the economy with the development of targeted programs for their development;

3) creation of the necessary institutional environment and infrastructure for the modernization of production;

4) establishment of the most popular products on the market;

5) regulation of the nature of the territorial concentration of the productive forces in accordance with the environmental capacity of a given area.

It demanded the transition from a functional to a territorial approach in the formation of an integrated system of public research institutions and public groups of experts for a comprehensive evaluation of innovative projects in terms of the feasibility of their implementation. This contributes to increasing the mobility of skilled manpower in the field of industrial innovation with continuous additional maintenance personnel. Active development of specialized mechanisms for financing innovation and combining them with the existing elements of the market infrastructure. Implementation of effective mutual arrangement of communication between industrial complexes based on a combination of different modes of transport.

Achieving these goals will provide relatively balanced development of areas with a combination of social development, construction and modernization of engineering and social infrastructure to improve competitiveness and innovation activity of enterprises [4, p. 73].

As part of an effective industrial policy is necessary to develop concrete measures to stabilize the financial and economic state of the industrial complex. Such measures should include:

2) the development of production in the direction of expanding the range of finished products and improve its quality through the use of modern types of raw materials [2, p. 94];

The implementation of the mentioned measures should be fulfilled on the basis of well-grounded business plans and perspective investment projects. In turn, this is closely connected with implementing effective budget, fiscal, monetary and investment policy on the federal and Russian regions level. Fulfilling the task of state interference into the industry’s functioning will enable stabilizing its financial and economic condition.