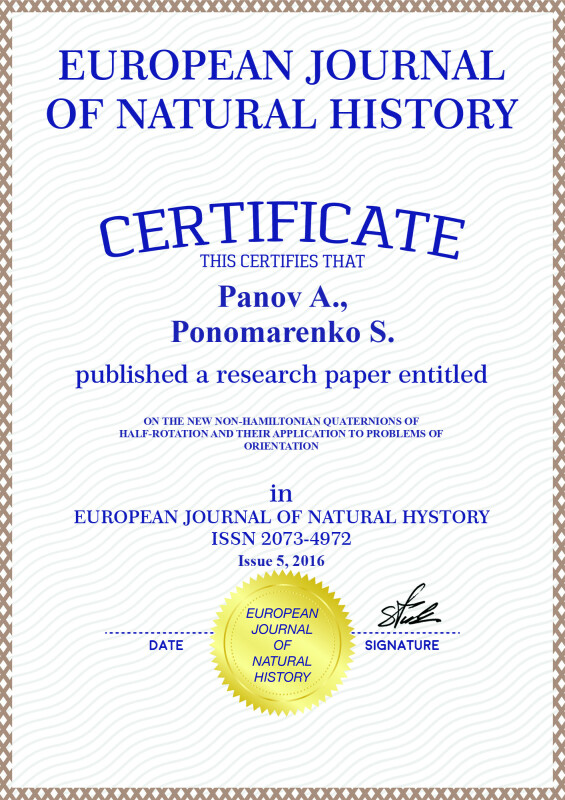 Article in PDF
619 KB
The application new (non-traditional) groups, algebras of the half-rotation solid body and their application in the orientation tasks for the strapdown inertial navigation system and orientation systems. Non-Hamiltonian quaternions of the half-rotation can be zero in contrast to the classical Hamiltonian normalized quaternions of the full-rotation with the parameters of the Euler (Rodrigues – Hamilton), their rates are not constant and depend on the Euler angles of final rotation.
non-Hamiltonian quaternion of rotation
half-rotation
groups and algebras of quaternions
strapdown inertial systems
guidance
navigation
control

In strapdown inertial navigation system (SINS) [1] and orientation systems (SIOS) [9] of the aerospace aerial vehicle the classical “Hamiltonian” quaternions of solid body rotation with the parameters of the Euler (Rodrigues – Hamilton) [1], [9] are now (from the beginning of the 70s of the last century) widely used. These quaternions are normalized (with unit norm) and they cannot be zero [1–10].

The possibility of using an unnormalized quaternion for SINS with no single the norms, depending on the angle of the final Euler rotation of solid body first is shown in [5 (2000), 10 (1999)]. Such quaternions are obtained by multiplying the normalized Hamiltonian quaternions of rotation (as unit vectors of the real four-dimensional space) by an arbitrary function of the angle of Euler rotation. They belong to the sets of non-Hamiltonian quaternions of the solid body “full” rotation.

The paper examines the new (previously published in [6]) unnormalized quaternions of rotation forming a set of non-Hamiltonian quaternions of the solid body “half-rotation”.

Non-Hamiltonian unnormalized quaternions of half-rotation are exceptional by virtue of their properties, in particular, the heterogeneity of systems of four kinematic linear differential equations corresponding to these quaternions.

We are considering two types of non-Hamiltonian, quaternions of the half-rotation of solid body:

is the unit vector of Euler’s axis of finite rotation (turn) of the solid body in three-dimensional Euclidean vector space [1; 3; 9]; φ is the Euler final rotation angle.

(coordinate orthonormal basis with unit vectors related to a solid body) are Euler (Rodrigues – Hamilton as a function of the angle φ) real parameters [1; 3; 9; 10]. They define the classic Hamiltonian quaternion of “full” rotation [1; 3]:

respectively on the modules

). This normalized “Hamiltonian” quaternions of half-rotation Р, М are regarded as vectors in the real four-dimensional vector space.

Unlike quaternions Λ, unnormalized quaternions U, V can be zero (at φ = 0 and φ = 2π respectively) and their modules depend on angle φ. Therefore, they are of special practical interest in solving two major problems: inertial sensing and inertial attitude control of the solid body provided that the shortest turns (at angles φ < π and φ > π) are ensured.

Quaternions U, V are exceptional (from the set of possible non-Hamiltonian unnormalized quaternions of rotation [1; 5; 6; 10]) as those quaternions and their corresponding kinematic differential equations and groups, group quaternions algebras of rotation have a number of special or unique properties.

By the way for example, quaternions U, V in addition to going to zero, have a common vector

and their norms are equal to doubled scalar parts:

In addition, the following equalities hold:

where (°) is the sign algebraic operations “Hamiltonian” quaternion multiplication [1; 3].

Quaternion kinematic differential equations for “proper” quaternions [1; 9, p. 109] U, V, are linear, but not homogeneous. Those equations are obtained from the known [1] linear kinematic equations

for quaternion Λ by substitution of variable λ0 with variables u0, v0 and are as follows:

is the angular velocity quaternion;

is the vector of absolute rotational velocity of the solid body;

is the relative derivatives of quaternions in time.

These equations because of their inhomogeneity are of special interest for the solution of tasks of synthesis of high-precision conical precession computer algorithms of SIOS (the sixth or tenth order of accuracy) using Taylor’s rows [9].

The formulas for the multiplication of quaternions of the half-rotation

is a scalar unit quaternion;

For two sequential finite rotations (turns) of the solid body, the group multiplication formulas of normalized quaternions Λ and non-Hamiltonian quaternions U, V are written in symbolic form as:

The formula (3) includes the operation of addition of quaternions, in contrast of the multiplication formulas of the classical Hamiltonian quaternions with the parameters of the Euler [1; 3; [4].

Multiplication formulas (3) quaternions U, V determines their name “non-Hamiltonian quaternions of the half-rotation”.

is a zero vector.

These equalities show that unit elements in groups of quaternions of U, V are respectively the zero quaternion and the doubled single quaternion 2Е4, and reverse quaternions U–1, V–1 are equal to the conjugate

Unnormalized quaternions space U, V, together with their multiplication formulas (3) (the algebraic operations), determined the actual new, associative, non-commutative and unnormalized group [11, p. 259] of quaternions algebras of half-rotation with single-valued division and without zero divisors [11; 12] (since these group algebras and group there is no zero divisors).

By analogy with the algebra of Hamiltonian quaternions Λ of rotation the exceptional quaternions algebras U, V of half-rotation are further endowed [4, p. 103–104] the structures of:

1) the commutative group under addition;

2) the non-commutative, associative four-dimensional algebra of division over the real. Thus the operations of addition and multiplication group (3) are distributive [3, p. 32].

Parameters of quaternions of U, V are used for the solution of tasks of control of orientation of the spacecraft (SC), as solid body, in positive definite quaternion functions fu and fv Lyapunov of a square look [5; 10]:

where αu, βu, γu > 0 and αv, βv, γv > 0; Аu, Av are definitely positive symmetric constant operators; is the momentum kinematics vector of the spacecraft; J is the operator (tensor) of inertia of the spacecraft;

is the angular velocity vector of the spacecraft.

With an appropriate choice of formulas determine the vector of control points (as described, for example, in [10]) a negative definition of the derivative of Lyapunov functions in time provides. The result is the asymptotic stability of the processes controlling the orientation of the spacecraft and its shortest spreads throughout the range of variation of the angle from 0° to 360°.

Based quaternion U, V may also be prepared by new biquaternions SINS algorithms [1].

The one-step algorithms of the third and fourth orders of accuracy in the “scaled” [9, p. 78, 79] quaternion type 0,5U used in the “HARTRON” Corp. (Kharkov, Ukraine), in the task of determining the orientation of the spacecraft [13].

Of particular practical interest now becomes a four-step algorithm of the fourth – sixth order accuracy [1; 2; 9; 14; 15; 17; 18], it is possible recurrence computing quaternion U, V with a time step H = 4h (h – a constant and minimum possible sample rate in the computer SINS of signals gyroscopes in time).

The article [7; 8] shows that the four-step algorithms are more effective for use in SINS than the one-step, two-step and three-step algorithms. These algorithms are used intermediate orientation parameters [9, p. 144] – the coordinates φN+4,k (k = 1, 2, 3) small vector

characterizing finite Euler rotation of the object to a small angle for a time equal to step H. The algorithms for computing these parameters may be represented by a generalized four-step algorithm of the form [9, p. 172]

Table 2 shows for comparison the values of constant speed calculation drift of the algorithms (with conical vibrations of SIOS gyroscopes block [14] with conditions: nutation angle – 1 deg, the frequency of vibrations of tapered – 10 Hz, step with computing – 0,01 s) obtained in computer simulations by the method of the parallel accounts [9, p. 218]. As can be seen from Table 2, algorithm 3 is significantly superior in accuracy and other algorithms are substantially so-called conical algorithm [15] (the actual sixth-order of accuracy). Further analysis showed the benefits of the algorithm 3 and also in operation performance [8; 9].

Of particular interest is the possibility of using adaptive conical algorithms [18] for the calculation of the parameters non-Hamiltonian quaternions of half-rotation in SINS. There is the only one optimal among the four-step algorithms the best in terms of accuracy and operation performance adaptive algorithm conical (algorithm 6 of the 6th order from Tables 1, 2). It is obtained based on the algorithm (6) with coefficients insist on a conical motion. This configuration by choosing values of the coefficient b23 in the formulas (3.3.107) of [9, p. 173]. This algorithm is performed complete (ideal) compensation conical error due coefficients k05, k14, k23 in square terms of the asymptotic estimates (4.3.31) constant speed computing drift-order terms O(h6) when ϑ > 0 (ϑ – nutation angle) [9, p. 215]. The accuracy of the algorithm, as shown by computer simulation exceeds the accuracy of the algorithm 3 a decimal (2,2·10–5 deg/h) under the conditions of calculation, the relevant Table 2.

The constant coefficients of four-step algorithms

The constant velocity of the drift computing of four-step algorithms

There is also the only one among the five-step algorithms the optimal conical algorithm of 6th order with the ideal correction of the conical error. A method for constructing such an algorithm and computer study of its accuracy and operation performance based on asymptotic estimates of similar cases four-step algorithm [9, p. 218, p. 249–255].

The parameters of the non-Hamiltonian quaternions of half-rotation are appropriate to use in advanced SIOS and SINS of aerospace aircrafts, along with the classic parameters of Euler (Rodrigues–Hamilton), or instead of them.