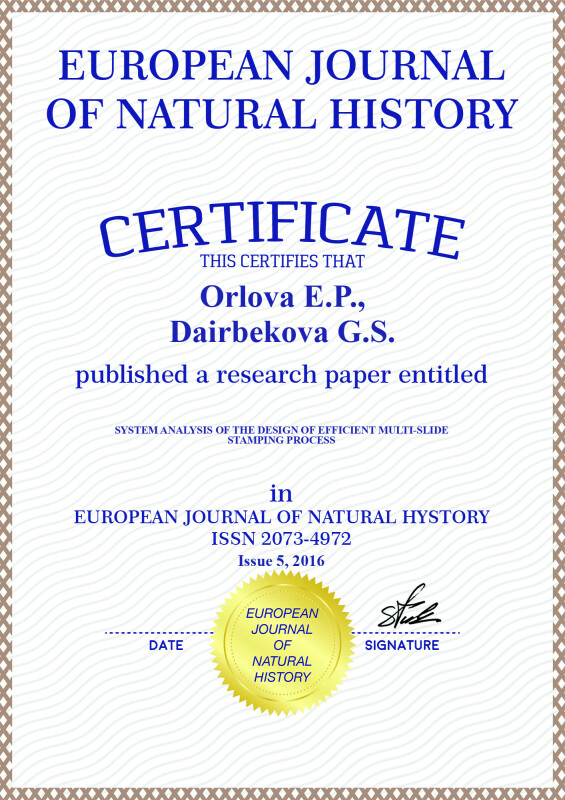 SYSTEM ANALYSIS OF THE DESIGN OF EFFICIENT MULTI-SLIDE STAMPING PROCESS

Article in PDF
315 KB
The article describes method of efficient multi-slide stamping process through of technological and structural factors. System analysis of the design of efficient multi-slide stamping process should include a number of subsystems concerning stable technology, optimum conditions of the machine, and minimum costs. Application of the system analysis at the design stage of the production process is allows to get the most efficient combination of production processes at the selected criteria.
multi-slide sheet-stamping machines
technological transitions
mathematical combinatorics
the number of positions
efficient process

Manufacturing quality parts by multi-slide stamping at automatic multi-slide sheet-stamping machines (AMSM) during their optimized operation is based on one complex problem solution – collaborative control of machine actuator operation conditions and production process.

According to the analysis of part stamping on machines by traditional technologies [1–5, 8], in some cases there are scratches along the generator, metal tears and breaks mostly in places of transition of the cylindrical part of the items into the bottom and the flange, that indicates unstable nature of the process.

System analysis of the design of efficient multi-slide stamping process should include a number of subsystems concerning stable technology, optimum conditions of the machine, and minimum costs.

Application of the system analysis at the design stage of the production process is intended to provide the most efficient combination of production processes at the selected criteria. The criterion for the subsystem efficiency – stable technology – is the indicator: horizontal displacement of the tool in the working area of stamping, which allows you to determine the error of the stamped part during completeness of the required condition.

System analysis is carried out in several stages [1]: technical information is collected, according to the part drawing the process requirements and its main and auxiliary functions are revealed. Under the main function of the process it is understood its general purpose, while support functions provide interim needs associated with the implementation of the main function.

For example, the main functions in relation to the unit process [1, 5–7] of drawing parts with extrusion are the following: making the part blank cylindrical, calibrating the flange, making the final transition. Technological transitions are taken as auxiliary functions. At the final stage of system analysis people are engaged in the search for new technological solutions, taking into account all possible ways of functioning.

where γn – number of possible changes of technological transition sequence in the process where the number of simultaneous transitions is equal to n; m – number of machine positions;

– number of combinations out of m to n elements.

Thus, for the eight-slide machine when n = 6, the number of possible changes of transition sequence is γ6 = 3; when n = 7 γ7 = 2, when n = 8, if you use drawing in four transitions, calibration in a separate position and final transition in two positions γ8 = 1.

By varying the placement of the operations according to the positions of the machine, you can find the total number of possible process implementations.

If the number of transitions n = 6 we have

For the following numbers of transitions the number of possible implementations of the defined process is given below.

When the number of transitions n = 7

When the number of transitions n = 8

For the twelve- and thirteen-slide machines the number of possible implementations of the considered process is when n = 6 and n = 7, several thousand, therefore one-flow stamping becomes unsustainable and we need to implement the process of stamping parts in two flows.

Once the number of possible implementations of the process is determined its required to find the optimum process according to the adopted criteria (inequation 1) when the tool displacement will be less than the one-sided gap at any technological transition.

This problem is solved with a help of ECM according to the developed algorithm of the efficient production process design.

However, in order to simplify the solution of this problem you can be restricted to finding right or left minimum torques from the applied forces on the machine positions relatively to geometrical center of the slider completing the condition:

In the practice of the design of rational multi-slide stamping processes with a significant amount of draw transitions, there is no need to analyze all the possible variants. Data calculations and analysis of force distribution on positions, evaluation of imbalances and tool displacements, deflection and rotation angles show that the rational ones will be the production processes designed with a displaced (in the direction of a slider) application of loads using drawing with extrusion.

Analysis of the design of production variants of multi-slide stamping processes shows that their number may reach several tens to several hundreds.