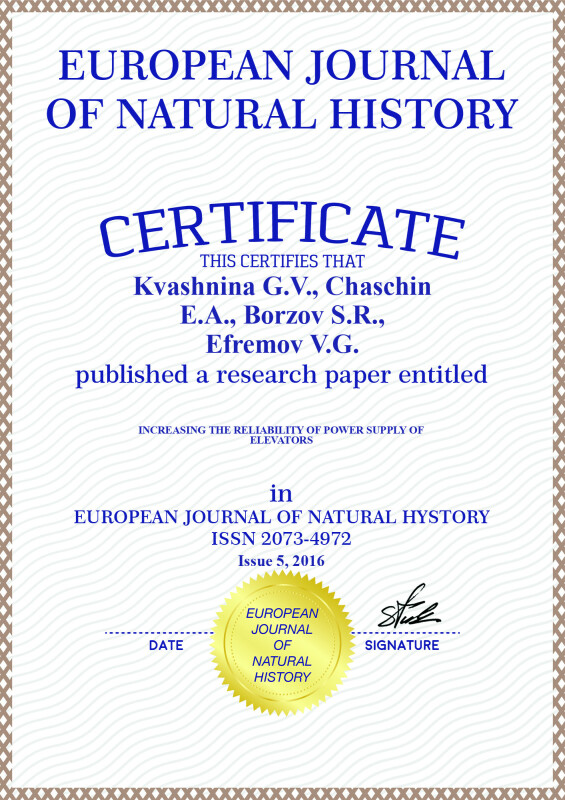 INCREASING THE RELIABILITY OF POWER SUPPLY OF ELEVATORS

Article in PDF
303 KB
Using storage batteries as a back-up source of lift’s electric drive makes it possible to provide the elevator power in the event of an emergency in the main power system. When analyzing the effectiveness of these measures is taken into account the possibility of the battery to restore the nominal capacity instantly. It was shown that the capacity of the battery should be choose from a condition that the maximum current does not exceed 2C discharge current. It is shown that excessive increase in capacity of batteries by their parallel connection reduces the reliable cooperation. This conclusion is based on the analysis of time to failure performed taking into account the failure of at least one of the batteries connected in parallel. Reduction of the total capacity is accompanied by an increase in the starting current. The number of battery charge-discharge cycles is reduced dramatically.
elevator
reliability
electric power supply
redundancy
back-up power source
reliability
storage battery
parallel connection
multiple redundancy
emergency mode

Power supply of elevators is a complex process that is regulated by several laws and requires careful attention during the construction of any building with this hoist. Malfunction or failure of lifting equipment may lead to material damage and harm to human health. Features elevators power depends on several factors which justified the type of lift, its speed, carrying capacity, type and characteristics of the drive, and others. However, in any case, power supply of the object must meet the requirements of continuity.

Elevators are consumers first category of power supply reliability. In accordance with the requirements of the Rules for Electrical Installation it must be provided with electric power from reserving two mutually independent power sources. Break the power is permitted only at the time of its auto recovery. That is why in [1–3], which were held earlier, urgent task to ensure the possibility of lifting equipment work for a certain period of time after the termination of the main power supply has been solved. For this purpose proposed to use a battery connected to the electric drive of the elevator and feed it in the event of failure of the main power supply. This version of a lift’s power is more preferable because the content and maintenance of the diesel generator as a backup source is accompanied by the need for the use and storage of fuels and lubricants, which increases fire hazard.

Justification of the effectiveness of different ways of switching the battery [4] carried out by the example of the elevator ZIRCON «LM LIFTMATERIAL GMbH» company (Germany) with carrying capacity of 630 kg, the nominal drive power of P = 4,5 kW, rated current of – 12,3 A, operating on AC current with a frequency of 50 Hz and a voltage of 380 V. Battery with a rated voltage of U = 12 V was considered as a backup power source.

We analyze the effect of using batteries as a backup power source to change the parameters of non-failure operation of the elevator drive power at different variants of the battery connection to the main chain. The most simple in terms of battery switching circuit is connected in series (Fig. 1).

Fig. 1. The replacement scheme to assess the effectiveness of series connection in the battery circuit

This is 10 % lower than the initial probability. Thus, we can assume that in the absence of other backup power circuits, elevator reliability of power supply decreases. The probability of system performance will decline with derating. In addition it should be noted that in the case of series connection for circuit performance is necessary to ensure the operation of all components of the circuit elements. The battery is constantly included in the circuit, which implies a constant battery mode. This operating mode is unacceptable in view of the sharp loss of battery capacity due to its continuous charge.

Research carried out earlier [1–3] showed that when using the battery as a backup power source one of the possible ways of their connection is replacement of redundancy In this case, the backup power source is connected in parallel with the main circuit power to the load through the switch, which is open during normal operation. It closes in the event of a mains, or when the voltage drops below a predetermined level (Fig. 2). The inclusion of redundant power supply can occur either automatically or by pressing a button inside the lift in the event of failure of the electricity grid.

Fig. 2. The replacement scheme to assess the effectiveness of switching the battery to the circuit

For the given parameters of the elevator and connect the battery circuit, having a 55 ampere-hour capacity it is able to provide a guaranteed backup time for 4 minutes [1]. It should be noted that in addition to the temporary power supply function, the presence of the battery in the power supply circuit compensates the reactive power occurring in the system. For the chosen type of lift at the initial power factor cosφ1 = 0,566 battery installation can increase this value to cosφ2 ≈ 0,9 [1]. Reactive power is not fully compensated for a given battery capacity. According to calculations the required capacity of the battery must be 75,6 ampere-hour. However, if due to high capacity, the battery can cause overcompensation of reactive power. This will lead to an increase in the reactive component and as a result to the growth of unproductive losses of electricity.

Thus on the one hand an increase in capacity of the battery to extend the backup power supply, on the other hand this may lead to an increase in reactive power circuit. This contradiction makes actual use as an additional electricity storage supercapacitor, which is connected in parallel with battery to the load. This will compensate for the jump of starting current and reduces the load on the battery. However, with the given parameters the power supply circuit from the supercapacitor is less than 4 seconds. So the study of the feasibility of sharing a super capacitor and battery have been conducted [2]. It was found that the combined use of the battery and supercapacitor ensures the growth of the likelihood of non-failure operation of the power supply with 85 % without the use of supercapacitor up to 95 % when sharing in the range of 0,5 minutes. Thus, making it easier to start-up conditions, the time of the elevator drive potential supply from the backup battery is extended.

We estimate the probability of working parallel connection to the load battery considering that the failure rate of the backbone and reserve element are different [2]. By setting the parameters of the failure rate of primary and backup circuit, we use the formula [5]

Fig. 3. Probability operate the lift with a different gap length of the main power supply

On the issue of evaluating the likely time of power from the battery is important to take into account the battery charge recovery. The charge is not able to recover quickly, and the time of its recovery will depend on the completeness of the battery discharge. On the other hand, if we increase the capacity of the battery, its charge time when deep discharge is also increased, and therefore the recovery time longer. It shows that it’s necessary to choose a rational choice of the battery capacity.

To determine the recovery time of redundant power supply system we evaluated the time required to charge the battery, depending on the depth of discharge [2]. As the prototype was used VAIPER battery, representing a starter battery 6ST-55 with a rated capacity of 55 A•h. It corresponds to the value calculated earlier. The battery has an inrush current of 420 A, and it was discharged DC 0,1 C. Reduced battery capacity was monitored by measuring the equilibrium open circuit voltage at the terminals of the battery at a temperature of 20 °C: the voltage of 12,7 V corresponds to 100 % of rated capacity; 12,55 % – 75; 12,20 – 50 %; 11,95 B – 25 % of rated capacity. Battery charge is carried out at a constant voltage of 14 V with ripple of the charging current does not exceed 2,5 % of nominal voltage. Applied Charger ZU-120M-3 device for charging batteries with capacity from 50 to 120 A•h. The results of this experiment are shown in Fig. 4.

It is seen that the depth of discharge increases from 75 to 60 %, the recovery time (charge cycle time) increases from 5,5 to 12 hours. Assuming that the recovery time of the distribution function vary in truncated-normal distribution law, we have found that the maximum current allowed for the battery discharge is 2C. Those. for the drive power of 4500 W, current, even without taking into account the losses in the inverter will be 4500 W/12 V = 375 A. It is seen that the maximum current allowed for the discharge of the battery 2C = 375 A. Therefore, the battery should have a capacity C = 187,5 A•h. The calculation assumed that the battery capacity is 55 A·h, therefore, it’s need to use four batteries connected in parallel. It was revealed that an increase in the number of parallel connected battery time between failures decreases linearly. Take into account that the limited amount of time between failure of at least one battery. For 4 parallel connected elements operating time is reduced from 18 to 1,4 months [2]. This makes it impractical to further increase battery capacity by increasing the number of partial batteries connected in parallel.