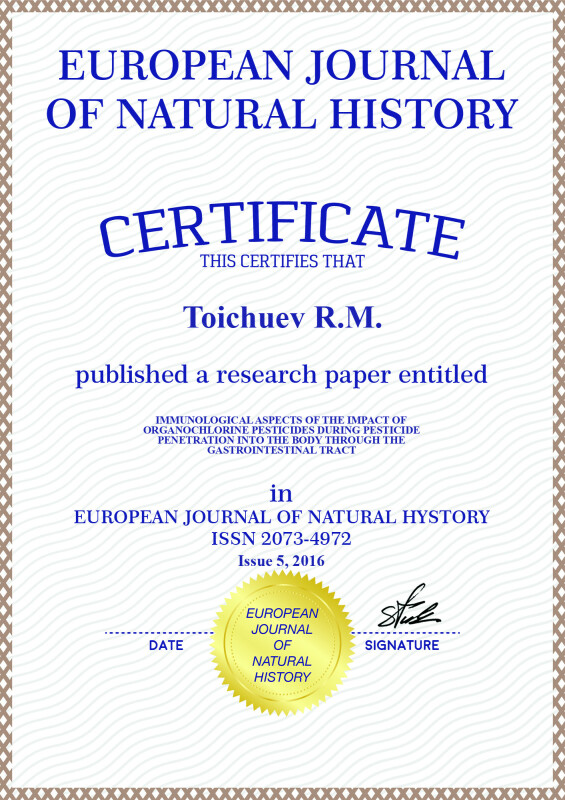 Article in PDF
203 KB
The paper presents data on the analysis of breast milk samples collected from 201 women living in urban and cotton-growing areas of the Osh Province of the Kyrgyz Republic. Breast milk (BM) samples were screened for organochlorine pesticides (OCPs) in the course of their penetration into the body through the gastrointestinal tract and excretion from the body with BM considering lymph nodes and immune-forming eubiotics damaged by these pesticides in gastrointestinal tract. Reduced detoxification function of the liver and low levels of secretory immunoglobulins (SIgA and SIgM) in GM were also taken into account.
immunological aspects
pesticides
gastrointestinal tract
breast milk
cotton-growing areas
Osh Province
Kyrgyz Republic

Background. The words spoken by L.I. Medvedev in 1970 “Even if we stop using DDT, people will remain it’s carriers for many years” are still relevant today and will remain true in the future [3]. In this respect, in Kyrgyzstan, sites polluted by organochlorine pesticides (OCPs) that were used in the 1970s for cotton and tobacco pest control (cotton and tobacco were strategically important raw materials in the Soviet Union) as well as for the protection of forest plantations, etc. [6, 7] are a constant source of concern. The impact of OCPs on human body, individual organs and systems were studied by A.I. Shtenberg, M.N. Rybakov [1970], P.P. Lyarskiy [1970], E.P. Krasnyuk et al. [1970], A.P. Schitskov et al. [1970], B.A Revich [2000, 2004]. M.B. Shpirt et al. studied the effect of different doses of DDT on immunological reactivity of experimental animals [8] in 1969. Despite the numerous works devoted to toxic chemicals and pesticides, many questions still remain unanswered.

It was found that in the environment of the Osh Province, more than 95 % of pesticides penetrate into the body through the gastrointestinal tract [7]. We have not met with the papers devoted to the comprehensive study of the impact of OCPs on the damage of immunity “defenders” during the penetration of OCPs and their excretion from the body depending on the functions of the body. Studying this problem may contribute to the development of methods of protection and prevention of “primary” damaged organs, systems and beneficial microbes-eubiotics of the gastrointestinal tract from the toxic effects of pesticides.

The present study has been conducted and is being conducted under the projects of the Institute of Medical Problems of the Southern Branch of the National Academy of Sciences of the Kyrgyz Republic: “Studying the influence of negative factors of the environment and working environment on the health of the population” (2001–2005) and “Medical and biological aspects of health preservation and improvement of the gene pool of the population living in ecologically unfavourable areas of the Kyrgyz Republic with the development of complex measures using local raw materials” GR № 0000465, (2006–2016).

Pesticides, when they get into the body through the gastrointestinal tract, first come into contact with the intestinal microflora that is involved in all processes in the gastrointestinal lumen, including the generation of antibodies and alter their enzyme and antagonist properties leading to variability of the intestinal microflora including eubiotics. Subsequently, OCPs get into the blood stream and lymph nodes (where immunoglobulins are formed) through the mucous intestine wall and damage lymph system (i.e., the immune system) and they then get into the liver by the portal vein disturbing its functions, including antitoxic function. In other cases, pesticides extracting with breast milk affect the level of antibodies in breast milk. On this basis, the state of the intestinal microflora (stool samples were collected for dysbacteriosis), liver function (liver tests were performed) and the levels of secretory immunoglobulins in breast milk have been studied. Concentrations of OCPs in breast milk were also measured.

Levels of secretory immunoglobulins (SIgA and SIgM) in breast milk were measured by ELISA.

Microbiological studies aiming at identifying and detecting the level of dysbiotic disorders of the gastrointestinal tract of the examined women were performed according to the guidelines by R.V. Litvak and F.P. Vilshanskaya (1977) [1] supplemented by V.M. Bondarenko V.G. Likhoded (2007).

Data on OCPs concentrations in breast milk of women in Subgroups of Group I are presented in Table 2.

Standards and techniques for the measurement of biochemical parameters

Allocation of the surveyed women with detected OCPs in breast milk into Subgroups, depending on OCPs concentrations

The levels of secretory immunoglobulins in breast milk of nursing mothers depended on the concentration and type of OCPs in breast milk. The more detailed information is given in Table 3.

Another equally important factor involved in protecting the body is the state of intestinal biocenosis; eubiotics in the intestinal tract not only possess antagonist properties against pathogenic and opportunistic pathogenic microorganisms, but also directly involved in the formation of secretory immunoglobulins in the digestive tract. OCPs interact with the intestinal flora, inhibit the colonization resistance of the intestinal tract and increase the number of opportunistic microbes suppressing eubiotics, thereby reducing the formation of secretory immunoglobulins.

The effect of OCPs concentrations in breast milk on the state of intestinal biocenosis is shown in Table 4.

As shown in Table 4, the highest percentage of alterations was detected in Subgroup I, where alterations were revealed in almost all groups of intestinal microflora with the increased number of week-fermenting E.coli and decreased number of bifidoflora, i.e. bacteria involved in the development of secretory immunoglobulins. This may be due to the fact that OCPs affect the microflora, primarily eubiotics, inhibiting their growth and disrupting the function of the enzyme. Detection of pathogens in control group may be due to the greater sensitivity of pathogenic E.coli to OCPs, but this issue requires further detailed studies.

Some antibiotic-resistant, modified microbes – E. coli and other opportunistic microbes detected during bacteriological tests are of great interest.

Thus, OCPs, when they get into the body through the gastrointestinal tract, primarily affect the microflora which participate in the formation of immunoglobulins disrupting its colonization resistance; when OCPS get into the liver, they disrupt protein-formation and neutralizing function of the liver; and eventually, excreting with breast milk, OCPs reduce secretory immunoglobulins SIgA and SIgM levels. The higher the concentration of OCPs in breast milk, the higher the occurrence of alterations of the colonization resistance of intestinal biocenosis, liver and the lower the levels of immunoglobulins in breast milk. It is therefore strongly recommended to examine breast milk of all lactating women living in cotton-growing and urban areas in the environment of the Osh Province for OCPs. It is also necessary to take appropriate measures to protect women from further penetration of OCPs and develop the ways of their elimination from the body.