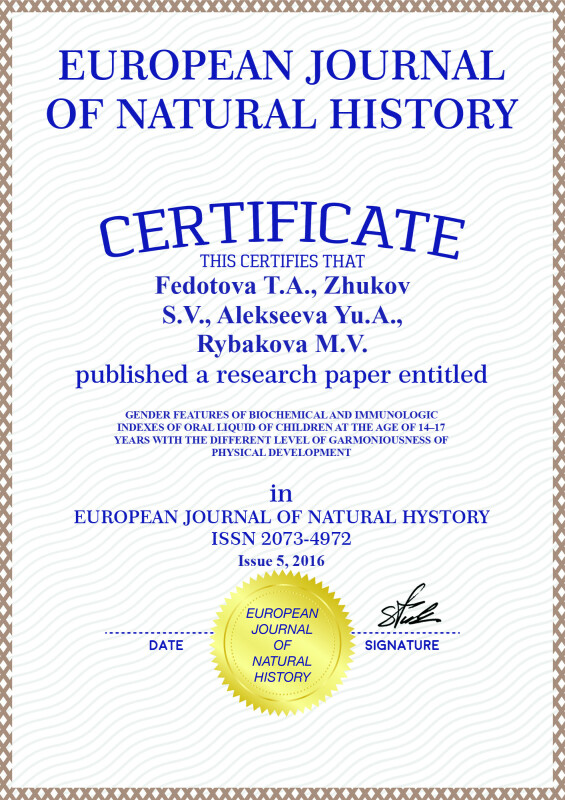 Article in PDF
195 KB
With the purpose of exposure of conformities to law between the value of row of biochemical and immunological indexes of mouth liquid and level of harmoniousness of physical development of child 168 children were inspected in age 14–17, constantly resident on territory of the city of Tver and student in the general schools located in different boroughs. All inspected children divided on sex and on the level of harmoniousness of physical development. The level cortisol was studied, DHEA, potassium, natrium, calcium, magnesium, phosphorus, secretory ig A in a mouth liquid. We conducted the analysis of features of biochemical and immunological indexes of mouth liquid of children with harmonious and disharmonious physical development. For an analysis were used non-parametric statistical method of comparison of two selections Whitney and grade cross-correlation analysis of Spirmen. Interesting appeared, that circumstance, that the similar reliable are Interesting appeared, that circumstance, that similar reliable correlative connections are for boys with harmonious development and for girls with disharmonious development. Alike, that for girls the disbalance of sexual hormones is guilty in disharmonious development.
children
teenagers
formation of health
level of harmoniousness of physical development
oral liquid

Physical development of child is estimated usually by comparison of his individual indexes with the age-related standards. It is thus important to not only decide a question about accordance of length and body weight, circumferences of thorax and other indexes to age of child but also specify, as far as his development is harmonious. For the children of school age these indexes it is necessary to estimate taking into account biological maturity.

For the estimation of physical development of children different methods were used – indexes, sigmalnykh rejections, scale of regression, tsentil. However, the method of indexes is confessed by useless for the estimation of physical development of growing organism, as it is set that the separate sizes of body of child increase unevenly, and, anthropometric indexes change disproportionate. Method of sigmalnykh rejections and scale of regression are based on supposition, that the investigated selection corresponds to the law of normal distribution, although research of forms of distribution of row of anthropometric signs (body weight, circumference of breast, muscular force of hands of and other) specifies on their asymmetry more often right-side. Therefore, the borders of sigmalnykh rejections can be artificially set too high or understated, distorting a veritable estimation.

At the individual estimation of physical development, determine the level of sign according to his regulations in a centile row. Five groups in this case estimate length of body (as well as body weight). Indexes getting in 25–75 tsentil, it is necessary to consider middle, in 10–25 – low middle, in 75–90 – hi middle, in 3–10 – subzero, in 90–97 – high. At accordance of mass bodies, circumferences of breast, are long and bodies are long it is talked about harmonious physical development.

In one of the samples added urea solution (0,3 moll/l), which destroys the fragile immune complexes. Avidness antibodies was evaluated using the calculated index avidness index, which is the ratio of the enzyme result for determining the concentration of antibodies in the sample were subjected to processing of urea, to the result of the measurement of the concentration of antibody in a sample, urea is not processed. The definition of avidness is the differentiation of high and low avidness antibodies. Avidness characterizes the adhesive properties of antibodies.

For statistical data processing software package was used “Statistica 6”. Statistical analysis included computation of descriptive statistics and data analysis for normality of the distribution, the investigation of relationships between the parameters and the comparison groups. Differences were considered significant when p groups < 0,05, where p is the level of significance.

Analysis descriptive the statistician of biochemical and immunological parameters in the mouth liquid of teenagers by comparison to the reviewer indexes of the studied parameters showed that the scope of vibrations of values of indexes of cortisol and DHEA (from minimum to maximal) for girls is considerably higher.

So when comparing two samples, with harmonious and disharmonious physical development has been a trend to differ (p = 0,0896) boys on the avidity of the secretory immunoglobulin a, but the girls a trend toward excellence by magnesium (p = 0,077).

Macro element composition of saliva very depends on composition of the used food and amount of the drunk liquid, from the state of gematosalivarny barrier and from maintenance of microelements in the serum of blood.

The decline of magnesium in saliva similarly can testify to propensity to the obstruction or at the presence of irritating the mucous membranes of harmful admixtures in an atmosphere [3].

In respect of pregnenetrioldione and DHEA, then it needed in every special case to understand individually: to know both weight and degree of stability to stress of child etc. It was desirable to add in future psychological tests for the inspection of children. Determination of DHEA replaces determination of 17 – KS in urine at the estimation of making of androgens. In the ovaries of synthesis DHEA does not take (a test is used therefore for determination of source of giperandrogenemiya in the organism of woman) place.

High avidness of sIgA can testify or about a chronic hearth in an epipharynx and adhesives properties of antibodies are high (antibodies ripen “quickly”, because constantly microorganisms remind about itself). High avidness of secretory antibodies A can testify and about propensity to the allergic reactions, (the best terms are created for sensitization of organism allergens).

It appears us, that a study of correlative intercommunications of biochemical and immunological indexes at different diseases and states of organisms is not only concrete recommendations for practice but also new going near understanding of adjusting of homoeostasis and new perspective ways of management by metabolism.

Given that saliva is a biological material, work which started recently and the concentration of substances in it are subject to very large fluctuations, therefore, to interpret the results of biochemical studies it is necessary not only among themselves but also in correlative relationships with clinical data and instrumental data survey. Through every living organism constantly passes a stream of various substances involved in metabolic processes, and emissions into the environment in the form of products of metabolism. This flow of substances the body and maintains its existence [1]. The lack of minerals in the diet forces the body to use its reserves, which are in the body tissues. Assimilation of minerals depends on their relationship and interaction with each other [2].

Regulatory mechanisms to ensure the preservation of life of the whole organism, called homeostatic [3]. The central mechanism for implementation of the recovery process of homeostasis are all sorts of barriers. Conventionally distinguish internal and external barriers. External barriers to protect the body from physical and chemical changes in the environment. They prevent the penetration of microorganisms, toxins, and provide disposal and removing them from the body.

Internal barriers regulate the inflow of blood to the organs and tissues necessary substances, and the outflow from the tissue cell metabolism products. The structural nature of the barrier histogematogenous up the endothelium, basement membrane, a basic substance and nerve fibers. Under the conditions of normal lifeblood of their dynamic balance supported by external barriers. Endothelial dysfunction is one of the major pathogenesis mechanisms of many diseases and pathological conditions, especially cardiovascular system.

The study of endothelial function as a model of the cell membrane is possible by examining its permeability in various pathological conditions to determine the concentration of the substances on either side of the membrane [4, 5]. In clinical practice, a certain perspective is the study of gematosaliva’s barrier function. It seems that expressed earlier hypothesis [3] on the existence of a close link between saliva and blood, and that the balance shifts in blood at the cost of violation of saliva biochemical balance is confirmed in the analysis of our data.