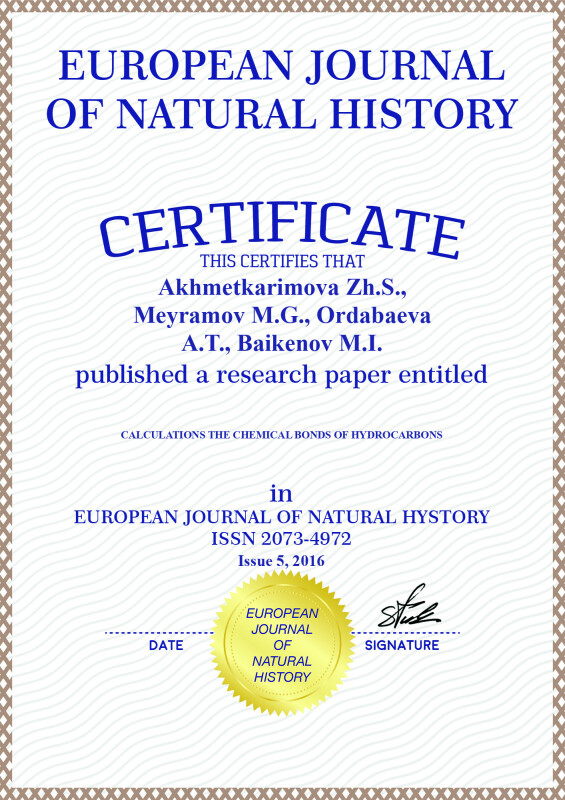 CALCULATIONS THE CHEMICAL BONDS OF HYDROCARBONS

Article in PDF
559 KB
Quantum-chemical modeling of surface processes, such as adsorption and catalytic processes require the use of methods to adequately reproduce the effects of weak intermolecular interactions. Knowing the wave functions, you can determine the electron density distribution, and calculate its resonance spectroscopic characteristics, describe its reactivity, calculated band structure of the crystal, and etc. All particles in the molecule react with each other; thereby calculating the wave function problems for complex systems is simplified, since the problem is reduced to one-electron wave functions defining each particle remaining in the average field of molecular orbitals. Article quantum-chemical methods calculated spatial configuration of the coal and oil asphaltenes, built profiles of the potential energy surface of the reaction of hydrogenation. It shows the energy rating possible routes of destruction of coal asphaltene.
destruction
oil
coal
asphaltene
quantum and chemical methods
dissociation energy
Complexity of studying of the mechanism of transformation of coal and oil substance in the conditions of process of a destructive hydrogenation is defined by that their properties change in the wide range depending on element structure, degree of a metamorphism and the nature of an oil field. It is known that all this variety leads to change of kinetic characteristics of separate reactions and their share importance in the course of a hydrogenation, but a community of mechanisms, its orientation and the main regularities remain. At a destructive hydrogenation of solid and heavy hydrocarbon raw materials leads to formation of various radical fragments that are stabilized hydrogen radical. Definition of the reactionary centers of hydrogenation of molecules of oil and coal asphaltene was carried out by means of quantum and chemical methods.

Oil and coal asphaltene are represented by the flat structural units containing aromatic, alicyclic rings, the having deputies. These structural units are associated in particles in such a way that the planes formed by aromatic atoms of carbon approach to each other at distance of 0,35–0,37 microns while aliphatic chains will defend from each other on 0,55–0,60 microns. Such particles having, therefore, in small degree crystal character, in turn associate, forming a colloidal micelle [1].

Apparently from Fig. 1, molecules of an oil and coal asphaltene have extremely complex structure, but coal asphaltene differ from oil in bigger carbon saturation, the main heteroatom in them is oxygen, whereas in oil – sulfur [2].

Spatial configurations of oil and coal asphaltene are received by the PM3 method. On the Fig. 1 the spatial configuration of an oil asphaltene is presented. It includes aromatic, cyclic and heterocyclic rings and, apparently is lower from drawing, the right and left parts of a molecule are focused relatively each other at an angle ~45–50 °C [3].

Fig. 1. The spatial configuration of oil (a) and coal (b) asphaltene (according to calculation by PM3 method)

In Fig. 1 the spatial configuration of a coal asphaltene which also includes aromatic and heterocyclic rings is presented. Numbering of atoms in molecules of oil and coal asphaltene corresponds to models for semi-empirical and not empirical calculations.

For calculations structures which geometry is optimized by the semi-empirical PM3 method were used. Further discussion is carried out by means of data of calculation by the RHF/3-21G (d) method [4].

One of further transformations of asphaltene is hydrogenation of a molecule. As hydrogenation reaction step, for preliminary studying direct accession of a radical (atom) of hydrogen to an asphaltene was considered. Atom of hydrogen is electron-seeking reagent. Its connection to the target molecule should occur, apparently, to an unsaturated aromatic portion asphaltene. To determine the direction of attack used the approach of frontier orbitals. HOMO (the highest occupied molecular orbital) and LFMO (lower free molecular orbital) of oil and coal asphaltene are given respectively (Fig. 2, 3) below.

According to the theory of boundary orbitals the centers of chemical reactions are in places of localization of electronic density of HOMO or LFMO. As energy of the orbitals of hydrogen radical is –0,11747 a.u., and LFMO energy of the oil and coal asphaltenes respectively –0,06663 a.u. and –0,08668 a.u., the small energy difference suggests the interaction of these orbitals. On the basis of this molecule for the asphaltene was chosen reaction center C10, coal asphaltene molecules C19 was chosen (numbering according to Fig. 1). However owing to a trifle of power intervals nearby orbitals can also interact with attacking the electron-seeking reagent. Therefore, the number of atoms – the centers of attack can be more.

Fig. 2. The highest occupied molecular orbital of oil (a) and coal (b) asphaltene (according to calculation by RHF/3-21G (d) method

Fig. 3. The lower free molecular orbital of oil (a) and coal (b) asphaltene (according to calculation by RHF/3-21G (d) method

Thus, the recombination of oil and coal asphaltene will happen to the atom of hydrogen which is the free radical of the first type, obviously in places of excess spin density. In attempt of quantum and chemical calculation of such system, optimization of geometry, perhaps, will lead to disclosure of a heterocycle. Destruction of a coal asphaltene it will be energetically favorable to pass on an amino group.