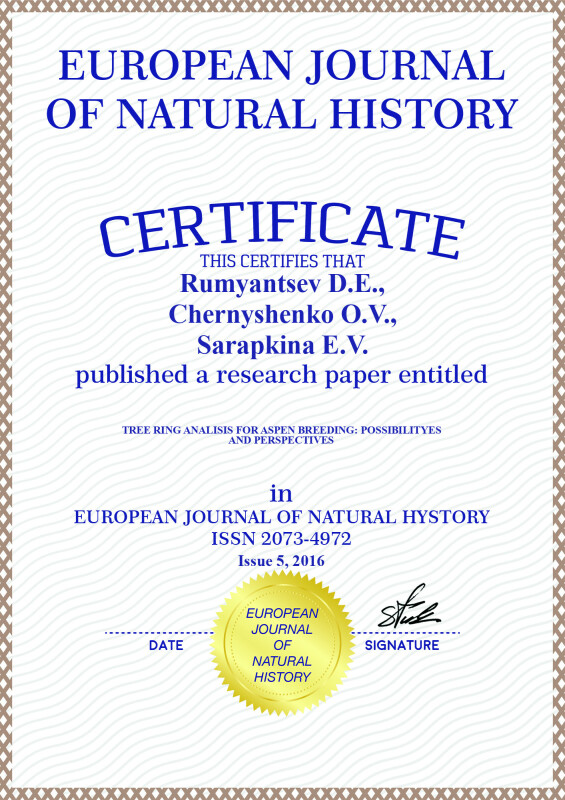 Article in PDF
314 KB
The plantings of aspen clones collections, as well as wild populations, may be used as an experimental plots for dendrochronological diagnostics of useful interspecies forms of aspen, especially resistant clones. The first investigation of aspen stands in these directions was made by us in 2015 in Izmailowski natural park. The study of tree rings variability at this objects will give us practical results at identifying valuable clones and ensure the improvement of methodical approaches for identifying valuable clones.
tree rings
dendrochronology
radial growth
aspen
forest tree breeding
drought resistance
The problem of the growing and breeding of healthy aspen is widely discussed in Russian forestry. Aspen wood is characterized by specific features and may be indispensable in particular parts of economy. The main difficulty for wide exploitation of aspen forests is a low quality of wood in the most part of aspen stands, which explained by lose of aspen polypore. This problem was the first discussed by academician A.S. Yablokov (1949) and in the USSR the great number of investigations were made, but for the present time this problem is relevant for Russian forestry. Last two decades together with traditional research methods the methods of molecular genetics, gene engineering and biotechnologies become available for the scientists. Also, the sphere for using traditional research methods, for example, dendrochronologycal method become wider.

The plantings of aspen clones collections, as well as wild populations, may be used as an experimental plots for dendrochronological diagnostics of useful interspecies forms of aspen, especially resistant clones. The investigations may be developed in some directions.

On one hand, radial growth is the indicator of rot wood resistance. The large tree ring widths correlate with quick overgrown of dry twigs, which makes impossible for fungal disease to penetrate in the tree trunk. Dendrochronological investigation helps to select clones with high rate of radial growth.

On the other hand, dendrochronological investigation can help to identify those ecological conditions, which caused the forming of wide tree rings. If such conditions are identified, we can give recommendations for microclimate regulation in planting that changes radial growth size for desirable direction for us. For example, temperature regime may be changed to higher temperatures thanks to the cuttings, which leads to tree stand density reduction, or, on the contrary, we can make microclimate cooler by the introduction of the shrubs under the stand canopy. If it is necessary it is possible to change the phytocenosys structure in such way, that will lead to better snow retention. Watering of plantings is a common operation at the urban environment, but the dendroclimatic diagnostics only makes it possible to identify the months when trees have critical water status, and so to make the watering more economically effective.

Also, if the most significant for growth climatic factors are found, we will have the information about instruments for radial growth rate stimulation and increase of planting resistance to rot.

The third direction is the possibility to assess hereditary ecological plant qualities and to climatic impact resistance diagnostics. Various clones will differ by the radial growth reactions for different ecological conditions and, thanks to that indicator it is possible to identify drought-resistant clones, frost-resistant clones and other similar qualities. The dendroclimatic information is non-alternative source here. The fact is that the laboratory studies do not give the objective information about tree growth at the ecosystem conditions, because there is a plant in competition with other plants and in environment with many changed ecological factors. However, such kind of information is difficult to receive by the direct experiments in nature, because it is necessary to observe the object for a long time in different periods of vegetation season, and after that repeat the observation from year to year. Also, the inability to replay experiment when the scientist needs this makes such kind of investigation more difficult. For example, it is impossible to plan the development of drought or the cold snap, or another climatic factor impact. But the tree ring analysis together with climatic data analysis allows to achieve all these tasks. Dendrochronological information may be demonstrated as a record of experimental series, that was implemented by the wild nature under the current genotype in different environmental conditions.

And the first direction is related with the fact that the tree ring investigation enables to study the technical qualities of wood, which are improved by the reduction of radial growth size.

The first investigation of aspen stands in these directions was made by us in 2015 in Izmailowski natural park.

As was established, tree ring width for aspen model trees is very variable from year to year.

The geobotanical characteristic of plots is at the Table.

The sampling was made by coring. From each model tree was taken one core at 1,3 m height of stem. Each plot was presented by 12 model trees. The tree rings was measured by using Lintab with accuracy 0,01 mm and after that cross dated by using computer program TSAP Win.

So, the years of minimums belong to trees from both plots.

According to the results of correlation calculation it was established that reliable, sustainable and biologically interpretable correlations between radial growth fluctuations and climatic data fluctuations are absent in considering chronologies.

It is due to the fact that the trees on considering plots are in the conditions of existence near the optimum zone and the factors, which are limiting the radial growth size, change from year to year. One year one factor has strong deviation from optimal for species parameters, and another year it will be another factor. In this case the correlation analysis gives results about the lack of the correlation, but it does not mean that climatic factors have no impact on tree ring forming.

The climagramm analysis for year can help in this case to identify climatic response at the time series of radial growth.

The climagramm analysis was made for the years group of strong synchronous reduction of radial growth (1995, 1999, 2002, 2011). The average month meteo parameters for this group are compared with the all-year average meteo parameters. The results of analysis are presented at Fig. 1 and 2.

Fig. 1. The comparison of average values for month temperatures: average for all years and the average for years with radial growth minimums

Fig. 2. The comparison of average values for month precipitation sum: average for all years and the average for years with radial growth minimums

As a result it has been established, that this year group is characterized by below average values of precipitation sum in May, June, July and August. However, for this year group the above average monthly temperatures for June and July are recorded. Thus, the main reason for forming extremely thin tree rings considering aspen cenopopulations was a water stress.

An important conclusion is that in years of water stress there are some parts of trees in cenopopulation, which have asynchronous radial growth reaction in comparison with the main part of cenopopulation. These individuals should be considered as potentially genetically more drought resistant and perspective for future microclonal reproduction and test in planting.

The study was supported by grant of MaRussiA-project by the Federal Ministry of Food and Agriculture of Germany.