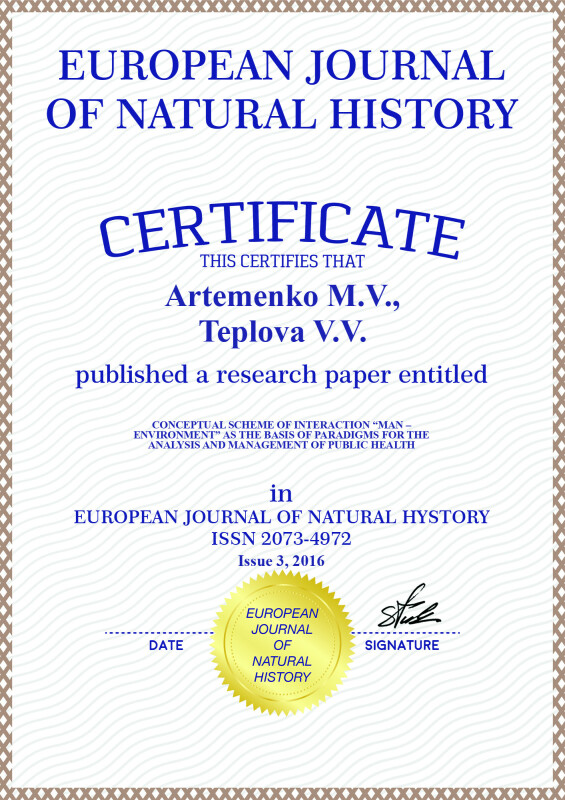 The article discusses the basic stages of the decision-making components of the system “man-environment” and their respective different four conceptual schemes of interaction of subsystems other than the autonomous management subsystem and the formation of functional, allowing to analyze the status and to carry out simulations of “man” and states “environment”, as well as to synthesize appropriate decision rules for state correction based on past experience, the current situation and forecast the future. These conceptual frameworks allow forming different paradigm for research in the field of study of the effect of habitat as a separate human body, and the population of a specific region as a whole through various aggregators functional, reflecting the relationship between the observed and controlled characterize the state of subsystems informative recorded indicators certain points in time. The above arrangements make it possible to systematize the study in the study of human responses to changes in the habitat of various levels of the organization biosystem.

The World Health Organization as indicators of public health in the implementation of the strategy “Health for all in the XXI century” stand [6]: the availability of primary health care, % of GNP (gross national product) in public health, public safety water supply, % vaccinated against infectious diseases of persons, nutritional status children born with low birth weight, infant mortality rates, mortality in general, fertility, life expectancy, literacy rate of the adult population, the share of GNP per capita. These figures are observed and controlled in terms of management theory.

Meanwhile, in the planning of economic costs requires an analysis of their expenses for specific recreational activities in a given region depending on the prevailing therein incidence of individual nosological groups. Adequate and reliable analysis of short-term and long-term forecasts of the impact of certain environmental factors, endogenous and exogenous characters (including man-made and rhythmological) allow you to control the above indicators.

Research in this direction are carried out continuously and the various mathematical methods (eg, represented in works devoted to fundamental and specific issues [1–4, 7, 8, 12]).

Studies show that the information sources the analysis of regression (linear) relationship between environmental performance and levels of certain nosological groups of morbidity and demographic variables considered, or the current time and-or considering the cumulative effect and, or, taking into account correlations to the time shift in the “past”. Meanwhile, any living open system responds to the current point in time based on the experience of its interaction with the environment in the past and forecast the future. Decision-making process in this case is described, for example [13].

According to [9] The basic steps:

1) the functioning of a healthy person is a sequence – update structures with the expenditure of matter and energy, education, and power consumption based on information influence the autonomous control system (ACS), regulation of energy processes using ACS temporary coordination structure and functioning of the energy-information levels;

2) the development of the pathological process – a temporary mismatch functioning at various levels of biosystem, violation of information flow in the body, the violation of energy metabolism, metabolism and organ destruction and-or the functional systems of the body.

These steps occur in view of the interaction of internal and external body fluids, both in time and in space. Because living systems have the ability of self-regulation and self-organization (including the maintenance of homeostasis), based on the positive feedback and it is necessary to take into account the factor of whether they are stand-alone control, the functioning of the basic foundations of which are discussed in [5].

To solve these problems is offered before the beginning of the identification process and functional-and-or logic or semantic relationships between speakers of different indicators of health medical and preventive character of the human population and environmental factors will be determined with the paradigm of the forthcoming investigations. In particular, we have a conceptual scheme “man – environment”, presented in Figure.

The results in Figure to form the conceptual schemes allow different paradigm for research in the field of study of the effect on the environment as a separate human body, and the population of a given region as a whole.

The circuit of Figure – subsystem HUMANITY and ENVIRONMENT are functioning according to its own laws defining the ACSE and ACSH, respectively, the interaction of states that can be described by systems of differential and-or regression equations reflecting the dynamic and static recording parameters determining the state of the subsystems and components and relationships defining their intended function. Here are four possible situations that determine the functioning of the ACSE and ACSH: dom(ACSE)&ACSH; ACSE&ACSH; ACSE&dom(ACSH); not (ACSE)&not(ACSH). In the first case – it is dominated by the ACSE, in the third – ACSH, in the second – cotrol systems are equivalent, in the fourth – almost absent (the values observed and controlled parameters chaotic subsystems).

The paradigm is based on the scheme shown in Figure, a is the largest application (including in [2, 7, 8, 11]), since in this case and ACSE ACSH autonomous control systems do not include one another, greatly simplifies modeling, reducing it essentially to the analysis of statistically significant, represented by registered during the monitoring of the observed values and adjustable parameters describing the state of the respective systems.

In this case, it carried out structural and parametric identification of functional models for the species:

In contrast to the previously used the work proposed as elements of a set of states to consider the state in a variety of positive and negative time offsets relative to the current moment:

For example, in the simplest case when the current state of the system is based on the preceding and following situations formula applies:

where Fuzj() – aggregator for the state Shumj of the function f with fuzzy model indexes dependence on the previous situation, the odd – on the future, a zero – the current (for ENVIRONMENT only).

(Note that the pilot simulation for the indicator “birth rate” and the characteristics of the water pollution in the Kursk region has shown to increase the accuracy of mathematical models constructed on the basis of the following formula and linear aggregator 15–20 % better than the models are not considered “forecast”.)

As reaction to the various components of systems in which members have the greatest correlation for different time shifts, it is recommended to initially assess the value of these changes either visually (by analyzing the dynamics of indicators) or by analysis of coherence.

The paradigm of scheme Figure, b suggests that HUMANITY is a subsystem of the ENVIRONMENT subsystem and, consequently, its autonomous status defined ACSH control system according to the multitude of its states and state ENVIRONMENT subsystems, variable functioning standalone ACSH system. In this case, it is necessary to identify and analyze patterns according functional types:

Paradigm simulations presented of scheme fig.1c, suggests that the ENVIRONMENT is completely determined by the states and transitions between them (hence the operation) HUMANITY subsystem (and ACSH). In this case, the functional models are defined:

Substantially different is the modeling and study of the state of HUMANITY is the situation represented by the diagram shown in Fig.1d, because it is an element of the hierarchical control at the level of “man – habitat”, providing for the dependence (observability and control) on the part of some “space” – the OUTER SPACE –, which by acting on the biosphere and the noosphere [10, 14, 15]. In this case, the basic paradigm is defined by the formula:

In fact, in this case, we considered a hypothetical situation of complete /controllability (controlled) state (and transitions) HUMANITY subsystem on external factors of the biosphere and the noosphere, which change under the influence of its own autonomous control systems (control) on the basis of the fundamental “space” laws of the cosmos. (The simplest option may be, for example, outbreaks of viral diseases, depending on the passage of comets, or “lunar cycle” of a number of mental illnesses.)

Thus, the presented diagrams of different paradigms of research of human conditions (as an element of “population”), allow to systematize the study in the study of human responses to changes in the habitat of various hierarchical levels and environmental changes (including human nature), which certainly should contribute to the concentration of research potential in certain areas, depending on the research objectives and the resources available.