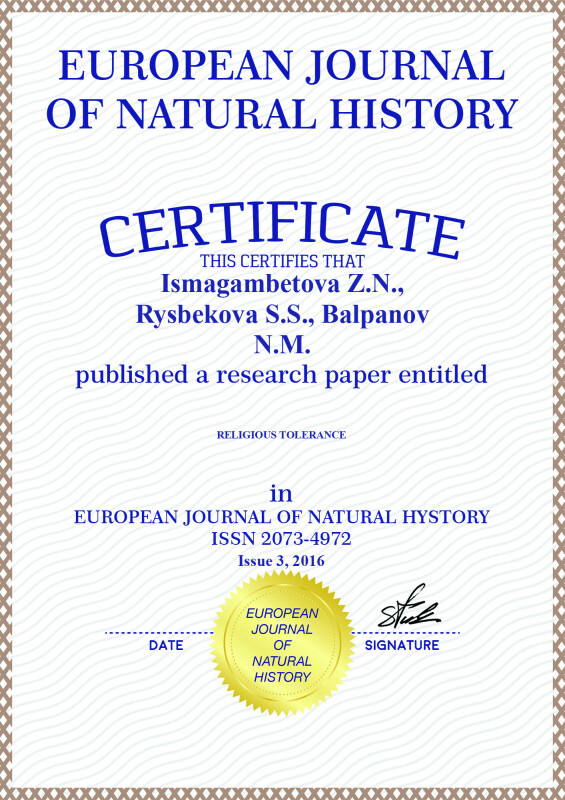 Article in PDF
197 KB
The article proves the importance and relevance of the study of “tolerance”. We give an attempt to uncover the term “tolerance” itself and demonstrate the ability to talk about a fundamentally different cultural condition of the possibility of tolerant consciousness and, consequently, the existence of its various forms.

In some ways, the relevant question today is a tolerant attitude to the opposite, a different outlook principles, then clearly the activity of mutual social, political and cultural, religious intransigence various associations. The basis of such intransigence often proclaimed not only the ethnic problems, but also confessional differences. The study and analysis of such problems with modern times is important.

In these circumstances, there is a need to develop new areas of technologies that contribute to the formation of cultural and civilizational contacts, and interfaith dialogue.

In Kazakhstan, the role of religion and faith in the preservation of stability and peace in the unity of the people of Kazakhstan was mentioned by NursultanNazarbayev. Kazakh thinkers R.S. Amrenova, B.A. Akhmetov, G.O. Nasimova contributed to the linguistic analysis of the meaning of “tolerance”, as well as the culture of peace concept were developed by B.G. Nurzhanov and T.H. Gabitov, M. Sabit, N. Ayupov, G. Yessim, J. Moldabekov, T. Burbaevevym, J. Altaeva, A. Balgymbayev, D. Raev, A. Mirzabekova, S. Kenjebayeva, A. Nysanbayeva, S. Kolchigin, E. Drilling, R. Kadyrzhanova etc. But not sufficiently studied is religious tolerance.

The aim of this study is to demonstrate the ability to talk about a fundamentally different cultural condition of the possibility of tolerant consciousness and, consequently, the existence of its various forms, the disclosure of social and philosophical foundations of tolerance in terms of the spiritual, ethical structure.

The concept of “religious tolerance” was studied for over the years, it has come a long historical path of development. For the first time this term is used in the legislation of the Roman emperor Constantine, who first proclaimed Christianity as the state ideology and vetoed the oppression and the oppression of Christians in the territory of the empire.

The subsequent development of the term occurred only in the XVIII–XX centuries, when it was disbelieved by many people around the globe, that no civilization, no state, no society and no culture is able to fully progress without basic rights: every citizen has the absolute right to religious freedom and to meet their spiritual needs. “The Universal Declaration of Human Rights” (1948), adopted by the UN General Assembly on this evidence, which established the principle of freedom of religion: “Everyone has the right to freedom of thought, conscience and religion; this right includes freedom to change his religion or belief and freedom to manifest his religion or belief, either alone or in community with others and in public or private, in teaching, practice, worship, practice and observance” (Article 18).

Concept of “religious tolerance” term develops in its teachings and religions of the world. These concepts and exercises no hint of exclusivity of one nation in the choice of religion. For example, if we consider one of the world’s religions, Buddhism, we can say with certainty about its nonethnicity, since it is composed of all, regardless of any ethnic, linguistic or cultural group they belong to. The doctrine of the Buddha is universal, is close to any person seeking spirituality regardless of ethnic society. This is evidenced by the position of his teachings. Buddhism does not see his own doctrine as the only valid.

Rather, Buddhist practice cultivates personal tolerance. One of its claims to “individual tolerance” practical principles is “the transformation of thinking”, “education of the mind”. The main purpose and objective of this practice appears bodhisattva’s gradual generation of an entity is within the reach of ordinary consciousness as a result of the modification of regulation: “the awareness that every living creature in the endless chain of previous incarnations ever had your mother, so to every creature should be treated as a mother. It is the basis by which is possible to generate feelings of love and compassion; replacing itself (as an object of care) others, i.e., realization of installations to take care of others more than about himself; the realization of equality of self and others, the fact that all living beings desire happiness and do not want suffering as I” [2].

This practice is an effective means of internalization (the transition from outside to inside) tolerant plants Buddhist teachings [3]. About tolerance, understanding the formation, strengthening intellectual property, limiting personal echoes of the negative thoughts and emotions are reflected in the words of the Dalai Lama: “Religion carries a huge potential benefit for all mankind; it can play an important role in encouraging people to cultivate a sense of responsibility for others” [4]. The Buddhist concept of compassion is the concept of tolerance. Multiple Buddhist canons preach love of humanity, generosity, kindness and other ethical ideals.

Christ gives the commandment to love and calls for perfection, to perfection in love. “Christian, as his spiritual perfection, should be exempt from the direct opposition of “I” and not “I”, to get a feeling or consciousness of inside unity” [6].

The essence of the teachings of Christianity is expressed in the unity of mutual love of believers – “that the love wherewith thou hast loved me may be in them, and I in them” (John 17, 26.). It is this love, reaching to the full communion of life and readiness donations it (15, 13), and there is the commandment, the execution of which is caused by our union with Christ (15, 9-15), “- says Metropolitan Anthony [6, р. 17].

The ideological foundations of tolerance in Islam derived from the Qur’an and Sunnah.

Sura 2, verse 265: There is no compulsion in religion, Sura 16: 125: Wanted path to Allah with wisdom and good exhortation. Sura 41: 34 Dejan good from evil cannot be compared. Pay to evilby goodness – and the one who was your enemy will become your warm friend [6] presented verses and their content shows tolerant attitude of Islam to the other members of the religion, and the unbelievers, they contain an appeal of goodness, justice, compassion for all mankind.

Islam in itself carries higher, spiritual, moral values of peace, good neighborliness. The Qur’an contains the idea of instilling the principles of the Muslim world, goodness, justice, and morality. The believer can experience the fullness of life, happiness, satisfaction only if the belief it was received without violence. One of the basic human rights of preaching and proclaiming Islam is freedom of religion. The verses of the Qur’an are the prohibition of any controversy bearing rudeness, contempt, irreverence to his companion: “Invite to the way of the Lord irrefutable arguments from the Qur’an and good admonition, and strive against them with the dispute soft and well” (surah “An-Nahl”, verse 125).

Even the heathen Muslims patronized and protected. The Holy Qur’an says: “If someone is out of the Gentiles will come and ask for the protection and patronage of the killers, you be his patron as long as he hears the message of Allah, and if you’re not confident escorted to a safe place for him” (Sura “Al-Tavba”, verse 9) [8].

Thus, all the world’s religions (Christianity, Islam, and Buddhism) have common values on tolerance, each of these religions state tolerance. The best way of formation of tolerance – a dialogue between different cultures, creature tolerance, including in the field of religion and ethnicity.

Also it can play a vital role to encourage people in the formation of a sense of responsibility, care, attention for others.