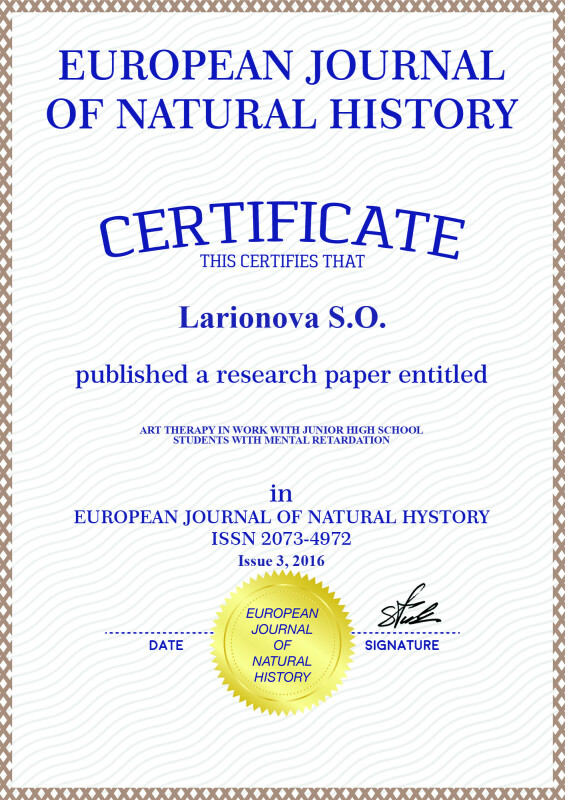 Currently, according to psychological and educational research the problem of study of deviations in behavior of primary school children is updated, particularly children with mental retardation.

Primary school age is a period of further development of the psychological individual-typological and the formation of basic social and moral qualities and traits of a person. In primary school age the determinant of moral behavior is laid; a child acquires the moral norms and rules of behavior, and social orientation of an individual begins to form.

Throughout the period junior high school students learn to control and manage their behavior. It is at this age the child becomes aware of the relationship between him or her and others, starts to understand the motives of social behavior, moral evaluations, to analyze the causes of conflict situations.

Generally, this age period is characterized by fixing arbitrary behaviors and activities, the formation of a new cognitive relation to the reality and the development of conscious mechanisms of social interaction.

Features of the cognitive development of children with mental retardation substantially impede the process of self-generalizing of those behavioral actions that are transformed into common ideas, beliefs and attitudes determining behavior of an individual in society.

In this context, special attention to the aspect of the problem being studied, according to correctional educators, special psychologists, teachers, psychologists, social workers, should be focused on behavioral deviation of primary school children with mental retardation. Psychological and pedagogical research suggests that these children differently than their normally developing peers perceive the social world and function in it: inadequate, uncritically, affective, selfish, and often infantile. Thus, the problem of deviant behavior in children with mental retardation is of particular importance.

1) heightened suggestibility and impressionable, carelessness, subordination in the interaction, the inability and unwillingness to act on the social rules and norms, the instability of social contacts;

2) an exaggeration of their potential, overlooking the particular personality of others;

4) the prevalence of destructive behaviors;

5) the lack of a sense of responsibility, persistent attachment, low self-criticism and increased demands of others, mostly negative emotional experiences;

6) the instability of personal motives and interests;

7) unformed personality-sense regulation that limits the reflection of their internal plan of action;

8) the lack of any regulation and underdevelopment of emotional and volitional organization of behavior;

9) dependence of the behavior from the situation, the inability to resolve even minor stress in the prescribed manner;

10) the instability and spontaneity of emotional response, hyperemotivity polarized with severe emotional downturn;

12) avoidance of the school and the school community, escaping from the house, school truancy, running away;

13) social isolation, confusion in the manifestation of compassion, empathy, care, generally shallow experience, the lack of formation of moral standards and values, etc.

The above mentioned behavioral disorders for such children are a familiar way to respond to adverse environmental factors and represent a kind of behavioral stereotypes.

According to L.L. Pelevina one should focus on the fact that in this group of students some skills of social and moral behavior, formed at a certain stage of age, can be relatively easily and quickly deteriorate, positive interests superseded by negative and asocial, and skills of social and psychological orientation can deteriorate [9].

Based on the above, in the context of studying the characteristics of manifestation of deviations in the behavior of school-age children with mental retardation has been suggested that art therapy is an appropriate and effective method of working with children in this category.

According to A.I. Kopytin, that art therapy can meet the challenges of prevention and correction of behavioral and emotional disorders in children developing their complex psychological skills needed to succeed in psychosocial adaptation [4].

Art therapy is, by definition of M.V. Kiseleva, method of development and changes in the conscious and unconscious sides of the individual psyche through different forms and types of art [3, p. 15]. The researcher points out that this method allows you to experiment with feelings, explore and express them on a symbolic level [ibid.]

L.D. Lebedeva focuses on the fact that art therapy as a technique is based on the belief that the internal “I” of a person is reflected in the visual images whenever he spontaneously, without thinking about his works, draws, paints a picture or sculpts. It is considered that the images of art reflect all kinds of subconscious processes, including fears, internal conflicts, childhood memories, dreams. With their verbal description, especially in children, there may be difficulties. In this regard, it is non-verbal means such as art therapy, in most cases, that are the only possibilities for the expression and clarification of strong emotions [6, p. 28].

So, the main purpose of art therapy is to harmonize the development of an individual through the actualization of the ability of self-expression and self-discovery.

Art therapy, in terms of E.A. Medvedeva, is a set of corrective treatment methods that have differences and features that are defined both by the genre belonging to a specific art form and by orientation, technology of psychocorrectional therapeutic use [1, p. 165].

Therefore, art therapy in the aspect of the problem being studied is considered as a set of methods and techniques based on the use of the arts in a kind of symbolic form and determining corrective effect on the psycho-emotional, behavioral, cognitive, and other areas of personal development of children with mental retardation.

Typically, children with mental retardation in most cases find it difficult to verbalize their concerns and experiences, in internalization and extrapolation of norms and rules of behavior and interaction, in reflection of reality, current events and circumstances. In addition, these children have poorly developed reflexive self, and some of them are characterized by negative self-concept, and respectively, using the methods of art therapy is especially important in working with them.

Thus, in the aspect of application of art therapy in working with younger students of studied category it is possible to recommend some tasks on a specific topic with specific material (drawings, sculpture, applique on any subject) or to offer the children some tasks on arbitrary subject with independent choice of material. One of the options is direct reference to the works of art (paintings, sculptures, illustrations, calendars) with the aim of reflection. A combination of several types of work has an important role, such as when a child is shown a reproduction of the artist’s painting and asked to draw the same one, not limiting his work. In addition, it is possible to implement work together with the child, giving him or her space for independent activity [8, 10].

O.A. Matveeva stresses that work with children of primary school age with mental retardation the most important is the use of art therapy, as art therapy allows to designate a specific task to think, write, do something themselves, modeling their experiences, interests, needs, desires and building up on the basis of this new work, divergent solutions of given task [7].

However, this is not enough, because, according to S.G. Rybakova [11], the formation of motivational determinants of behavior that determine the child’s achievement of success and recognition is also essential.

As A.A. Koroleva points out, in the process of art therapy urgent need for the child in a positive attention, feeling of success and self-worth is satisfied. Psychological energy is released and is wasted on ineffective stress. Consequently, a child begins to feel calm, relaxed. Psychological defense in the form of demonstration, negativity, aggression, conflict and mendacity is replaced by initiative, kindness, creativity, constructiveness [5, p. 37–38].

Art therapy allows children to form adequate attitude to themselves, others and the real world. Art therapy effects on a child’s personality is aimed at developing the child’s sense of empathy, understanding of states, moods and emotions of others, benevolent-critical perception of the strengths and weaknesses of others, the ability to prevent and overcome personal conflicts, culture of emotional expression. This, in turn, determines moral development of an individual, provides guidance in the moral standards, assimilation of ethics [2, 6].

It should be noted that art therapy provides the child with mental retardation the opportunity to express feelings of different modalities, including feelings such as aggression, anger, temper, hostility, irritability in free socially acceptable form. Sculpture, painting, sewing, drawing, playing are constructive ways of transformation of psychological stress, frustration and feelings of intrapersonal conflicts of a child.

In addition, art therapy promotes the development of the child’s attention to his or her feelings, sensations, desires, thoughts and actions, as it allow to experiment, explore and reflect at some symbolic level that is a peculiar safe form of self-expression and self-discovery. During the art therapy process, the child acquires the skills to overcome difficulties of choice and decision-making, adequate perception and attitude to failure, difficult life circumstances, which generally improves self-esteem and success of social adaptation of children of primary school-age with mental retardation.

Thus, art therapy allows a child with mental retardation in adaptive form to actualize a traumatic situation or experience for him or her, and based on that recognize their own feelings and emotional experiences and work them through verbally, to analyze the reasons for their actions and behavior and, therefore, to design the divergent ways and forms that contribute to a constructive solution of a problem.