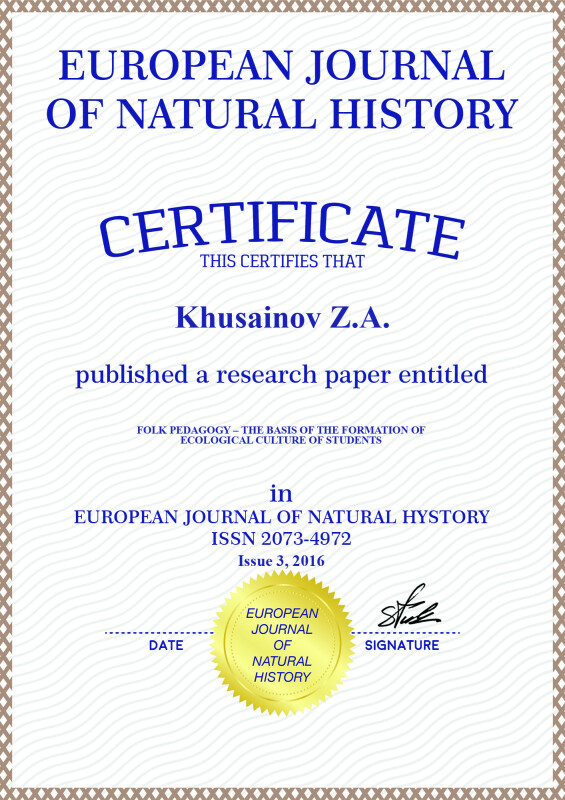 Article in PDF
198 KB
Centuries-old experience of cooperation of Tatar, Russian and other people and their joint residing at one ecological space promote development of the common ecological culture. The ethnopedagogics develops on the basis of natural living conditions, language, psychology, religion of the people occupying the country. The national culture is historically formed on the basis of ethnic culture, it incorporates elements of various ethnic cultures and acts as the dominating one. Hence, in modern conditions it is necessary to use ecological education and upbringing from the early childhood continuously and purposefully on the basis of ethnopedagogics. The problem chosen by us and the created concept is a basis of formation of ecological culture of pupils in ethnopedagogical aspect, and simultaneously it has ecological, scientific and pedagogical, historical, sociopolitical value.
ethnopedagogics
ethnoecological consciousness
ecologically cultural person

Today’s global crisis does not have sociopolitical and economic roots only, but it is also an ecological crisis. Its prevention is possible only if we change the system of values which are formed by secondary school. It will be successful, especially if we use scientific knowledge based on the national pedagogies. As the national poet of the Tatar people Tuqai wrote, “People is great, mighty, he is talented, lyrical, he is a writer, he is a poet” [2]. The term “ecology” is derived from the Greek word “oîkoς” – the house, the Homeland, however it does not completely show the heart of the problem as all the steps taken to protect the environment are defined by human behavior, their attitude towards the nature. According to the results of our researches on the problem of formation of school students’ ecological culture at the lessons of Geography on the basis of local history materials it is possible to argue that, the following statements are very important:

The basis of formation of school students’ ecological culture is scientific and national ecological knowledge, which can be used at the lessons of Geography. We can consider such well-aimed sayings of our people about interaction of a human-being and the nature like: “Ineptly planted tree dries quickly”, “We don’t appreciate water until the well gets dry” to be national ecological knowledge. Such national and pedagogical knowledge reflects the main regularities and relationship of the components of geographical cover (lithosphere, atmosphere, hydrosphere, anthroposphere), existing in the nature and the society whose violation generates negative and irreversible processes. They help to form creative thinking. Thinking is the highest step of human knowledge. A student mentally interacts not only with close, but also with remote in space and time natural phenomena and social objects. People say: “There is nothing as fast as a thought”. Ecological consciousness is formed on the basis of ecological thinking. Consciousness is the highest form of mental reflection of reality. We have every reason to repeat the folk saying “Mind is dearer than gold”.

Due to the work at the lessons of geography moral and ecological education and development of pupils is carried out. Work plays the key role in their material and spiritual life. People say: “When work is pleasure, life is treasure”, “Learning and work go hand in hand”. The source of labor activity of school students in Tatar national school is “help” (“oma”) [5]. It is an organized collective work of people, custom of mutual aid of Tatars. Any types of “oma” is directly connected with the nature. Sometimes they were organized according to the decision of the Council of

Elders – aksakals, to support widows, orphans, fire victims, to keep in order local roads, streets, places of the general using, springs, etc. Many of them were held as youth holidays with songs, games, ceremonial actions [3]. Tatars still have tradition of mutual helping in nowadays, it is closely interconnected with natural phenomena and promotes formation of ecological culture in school students.

Besides, game songs of the people connected with ancient calendar holidays, for example with the spring equinox – on March 21 – “Nauruz”, with the winter solstice – on December 22 – “Nardutan”, with wedding, ceremonial youth games during a sit-round gathering – “Aulak ij” [1]. They all have a geographical content and promote formation of ecological culture in children.

3. Ecological moral – esthetic attitude of people to the environment, its emotional sensory experiences

One of ways of overcoming of ecological and spiritual crisis in the younger generation is familiarizing young generation with the world of beauty. Therefore the task of a teacher of Geography is to show to pupils the beauty of the environment. People say: “To admire beauty is a part of paradise”, “Beauty does not need ornaments”. Therefore, geographical knowledge and skills of the people contain moral-esthetic bases and promote the formation of ecological culture in a person. Moral is the basis of life. Famous American public figure, B. Washington, wrote once: “Upbringing of an intellectual individual, without any moral, means, to bring up threat for society”.

Ecological education of pupils by means of national pedagogy at the lessons of geography allowed us to conclude that proverbs, sayings, riddles, legends, fairy tales, songs passing from a generation to generation, create visual images of ecological activity. For example, at geography lessons when studying topic “Hydrosphere” in the 6th class we used such a national saying: “Don’t spit in the old well, dig out a new one”. When studying the topic “The geographical cover” it is possible to use the following national ecological knowledge, reflected in sayings: “Once you have planted a tree, you will have become the honorable person”, “If there is a garden around your house, a nightingale will come with pleasure”. People have always had special attitude to places of their own dwelling, they have especially respected springs therefore in the world of the nature there were special rules of behavior. On this basis, at geography lessons of the 6-th level when studying subject “The rivers and lakes” we used the following rule of the people’s attitude to water: “Fluid pure water is medicine itself”. Such way of life had special value in preservation of nature. The folklore of the region contains ecological education of not only Tatar people but also the one of other peoples of the region. For example, Russian saying says: “Spitting on water is all the same as spitting in your mother’s eyes”. Chuvashs say: “Tasa dalkudran tara tiv yukhat” (“Pure water comes out of pure spring”). The Udmurt people have such saying: “Mugoris deriez vuen no giltini lue, nosh vu pozhaskiz ke main soe dunmalod” (“If the hand is dirty, you can wash it with the water, and if the water is dirty how can you wash the water?”. Germans of Volga region consider: “Das Wasser ist am besten beim Ursprung” (“The purest water is at the springhead”) [5].

Thus, the experience of cooperation of Tatar, Russian, Bashkir, Chuvash, Udmurt, Mari, Mordvins and other peoples of the region and their collaboration in one ecological space promote the development of collective ecological culture. They were the first unwritten laws on protection of the environment, first and foremost ecological culture, and they can provide formation of the basics of an ecological world view, moral and culture in modern generation at geography lessons.

The religion is a complicated form of culture. Religious belief is not the way of solution of definite tasks, but a naturally arisen since ancient times phenomena. Today it is not that important what religion a man belongs to, much more important that religion is not used to inspire the hatred between believers and non-believers which takes to the split of the society. Therefore at the lessons of“Geography of continents and oceans”, “Geography of Russia” and “Economic geography of foreign countries” while studying various chapters teacher can use local materials. For example, Islam played a great role in formation of ecological culture of Tatar people. Today they say a lot about terrorism in Islam, however the essence of Moslem culture is expressed in the main principles of the Qur’an, and true Islam has no relation to terror and terrorism. The senior generation taught the younger one according to the Qur’an: “Don’t spread misfortune on the earth, we came here for creating”. A certain part of the Qur’an consists of its legal, moral and esthetic aspects, thus moral and ecology are inseparable. Islam professed by Tatar and Bashkir people, and Christianity professed by Russians, Chuvashs, constitute the legal, moral and esthetic aspects, and moral and ecology are inseparable. Islamic the religion of Tatars and Bashkirs, and Christianity the religion of Russians, Chuvashs, Maris, Udmurts and others peoples of our region teach mercy, friendliness, kindness, generosity, responsibility to their believer, ecologically bring the person up from within and help believers to foster ecological culture. According to the Constitution Russia is a secular state in which the religion is separated from the state, and school – from church and mosque for ensuring spiritual freedom of citizens. It is implemented in all civilized countries that does not prevent the western countries to build the life resting on the unity of two beginnings – religious and secular [4]. Thus, in our understanding ecologically educated person is an intelligent and civilized person possessing not only geographical knowledge, but also developed ecological knowledge of his/her people, being able to think and operate ecologically, taking care of the natural and social environment. We train such Person and we bring him/her up at geography lessons.