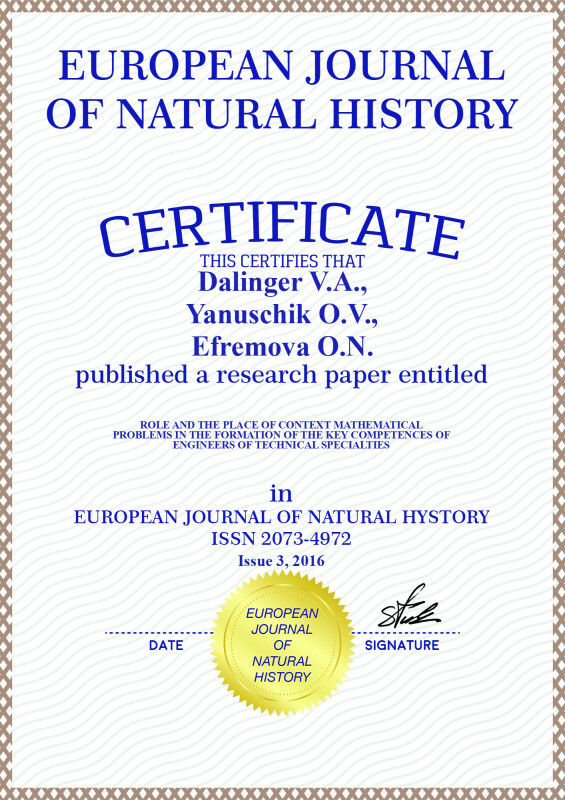 Article in PDF
200 KB
This article presents the concept of a “key task” and a “context task” and their place in the educational process; describes the activities, carried out at the Tomsk Polytechnic University, which contribute to the formation of the core competences of engineering students; the example of the context task, composed by the student within the conference week is given.
higher education
core competence
conference week
contextual problems

The development of modern society is impossible without a certain foundation. One of the components of this foundation is well brought up and educated man. So Professor E. Glaeser, working at Harvard University, revealed a direct dependence of income and population growth on the number of residents with higher education [1]. Later American scientists proved that by increasing the percentage of people with higher education increases the efficiency of all workers, as well as wages of all categories of employees [2]. According to UNESCO experts [3] 250 million children around the world today do not get the basic educational skills, which results in many countries economic losses at the rate of $129 billion per year.

Therefore, education in general and higher education in particular is becoming a cornerstone in the development of society. Requirements for graduates of schools and universities have changed significantly. Nowadays, according to the standards of the new generation, the aim of the university is to prepare such a specialist, who would not only possess knowledge in the context of a one subject, but could apply that knowledge beyond discipline. That is every college graduate should possess core competencies, which, with regard to professional education, are treated as the students ability to act independently in an uncertain situation in dealing with immediate problems. These abilities can be realized beyond professional education [4].

Some of the requirements for core competencies, formed by the university, should be noted:

– core competence – is the student’s ability to act effectively not only and not so much in the learning process, but in reality;

– core competence – is the ability to act in such 3 situations where you have to define the problem, to clarify its conditions, as well as to find the solutions and more importantly to assess the result;

– core competence – is the ability to solve problems relevant to the students themselves.

It should be pointed out that to prepare a specialist who meets the requirements of the new standard of education becomes a fundamental task for universities. One of the problems in solution to a question is related to the low levels of school education in general and mathematics education in particular. This is evidenced by the data presented in the paper by L.P. Kostenko [5], where he has been analyzing the state of knowledge of the first year students and schoolchildren since 1920 to the present day. The author notes that to date the number of mathematically literate pupils and students is 80 %. Analyzing the results of various international tests in mathematics for the last two decades, we can see that the Russian students are in the group of countries, where the results are significantly lower than the results of the countries of Organization for Economic Cooperation and Development (OECD). In 2012 PISA test results on 15-year-old Russian pupils scored 482 points, while the average for the OECD countries – 494.

From above it can be concluded that many of the students, who enrolled at a technical university, do not have sufficient knowledge of school subjects of natural science cycle that are the springboard for a successful study of various disciplines at the university.

In this article we would like to describe the experience of solving the problem of specialist training at Tomsk Polytechnic University (TPU), satisfying the requirements of modern society on the example of teaching further mathematics.

We can identify three areas in the solution of the problem. Firstly we must understand that there are so many specialties at TPU as a technical university and for each specialty to study profession-oriented subjects different amounts of mathematical knowledge is needed. In some specialties the more in-depth study of mathematics is important, in others it is not. Therefore the so called “clusters” of subjects are introduced. In each cluster on similar specialties the description of the work program on further mathematics and the number of hours to realize it are given. The work program puts an emphasis on the study of those branches of mathematics that are necessary and sufficient to a greater extent for the study of subjects in the specialty. Thus, in the practice of TPU 6 clusters in further mathematics are implemented. For example, a teacher, who works with students enrolled in the specialty “Engineering”, should be based on the work program of further mathematics for cluster 1, and the humanities – for cluster 6 [6].

However, the introduction of clusters was not sufficient. Starting studying at high school, many students can not get involved in the learning process because of the low level of knowledge in school mathematics, so necessary for a college education. TPU solution to this problem has led to the introduction of a course entitled “Mathematics A”, which aims to eliminate the gaps in students’ at high-school mathematics and bring them to at least that level of knowledge, which is necessary for the study of further mathematics course on a particular cluster. At the first lesson control test in mathematics is conducted and those students who do not fulfill the half of tasks get into the group, who must attend a course “Mathematics A”. It should be noted that those students whose control test was well written, still attend this course, considering it necessary to reinforce and review learned at school material in mathematics.

However, we must really understand that all these measures do not give us the greatest challenge decision – the formation of core competencies. All this is the only platform on which the teacher must correctly build a learning process.

But as practice shows, the main solution to this problem is to conduct a conference week. This week is held in the middle of each semester and focuses on the creative work of students. This week the teacher does not give classes but indicates the range of questions in advance that a student can explore on their own or to undertake a study and make a report.

We describe the experiment of the conference weeks on the example of specialty “Engineering”. Students of specialty “Engineering” are trained in cluster “Math 1”. Under the program, the cluster of further mathematics teaching occurs within 3 semesters. In the first semester the main branches of algebra, analytic geometry and differential calculus of functions of one and several variables are studied. In the second semester the study of integral calculus and differential equations is conducted. In the third semester – series and a comprehensive analysis.

To the first conference week in the first semester the students are just beginning to learn the basics of mathematical analysis and such a fundamental to this course concept as the limit of function. As a rule, they are not able to conduct any independent researches, so this week as a creative task they are offered to prepare an abstract on any mathematical topic, even scoping.

In the second semester, when the student has already an experience in successful examination, which for many of them is a difficult task to overcome, they are encouraged to prepare for the conference week task of applied nature. For example, by the middle of the second semester the concepts of definite, double and triple integrals are already studied. As the number of hours to study these topics is small, the application of these integrals in practice are not considered. Therefore, in practice, it is advisable to offer the students themselves to find problems on application of integrals and to study their methods of solution, but it’s still not quite a creative task. More often the students solve tasks of finding the volume of the body, the weight of the disk or the liquid pressure on the body.

By the third conference week (this is the third semester), when learners have received almost all of the mathematical knowledge specified in the work program, students are encouraged to prepare one contextual problem with its decision. This requires the integration of knowledge that gives rise to the formation of core competencies.

Under the contextual tasks used in the study of mathematics are regarded such tasks, in which the main objective is to allow both standard and non-standard situations (subject, intersubject or practical), with the use of an appropriate method of optimal resolution with the mandatory application of mathematical knowledge [7]. The higher priority function of such tasks consists in getting cognitive and professionally significant result by the student.

A special place among all contextual tasks take the practical context problems. Their solution requires a more detailed analysis of the text of the problem, analysis of the task for excess and deficiency conditions, identification of the best way of solving, that involves the establishment of relationships of various branches of mathematical science with other subjects and the scope of professional activities. Solution of such problems proposes a composition of a mathematical model, intramodule solution and interpretation of the result.

Our experience shows that the solution of context problems helps students to acquire knowledge, which will help them in their professional activity and learn how to apply this knowledge not only in solving various problems, but in a changing problem situations.

1) to take a ready made mathematical model and to pick up the proper narrative situation;

2) to take any real situation, connected with a professional activity, to build a mathematical model on its bases, which allows solve this situation.

As practice shows, at first the student goes the first described way, but gaining the experience, he is able to perform the procedure given in the second approach.

Let us give an example of the context mathematical problem, which was proposed by a student at the conference week.

The Task. There were several welding transformers on the pipeline in Tyumen, but after long work they fell out and could not be reversed. Since the shift is in a very remote area, the shipping of new transformers will take a lot of time, which leads to large financial losses. So the team takes decision to make new welding transformers from improvised materials. But first of all it is necessary to calculate welding transformers under already available materials. We assume that the welding transformer is designed for the operating current of the secondary coil I2 = 160A, with the output load voltage U2 = 50, mains voltage U1 = 220, the value of POS (period of service) is taken as 20 %.

Obviously, solving this problem requires not only knowledge of mathematics, but also knowledge on the subject of welding production.

Our experience with the context of mathematical problems in the training of specialists in the field of engineering shows that it promotes the absorption of both subject knowledge and skills and the assimilation of professionally significant knowledge and skills. In general, it raises cognitive motivation.