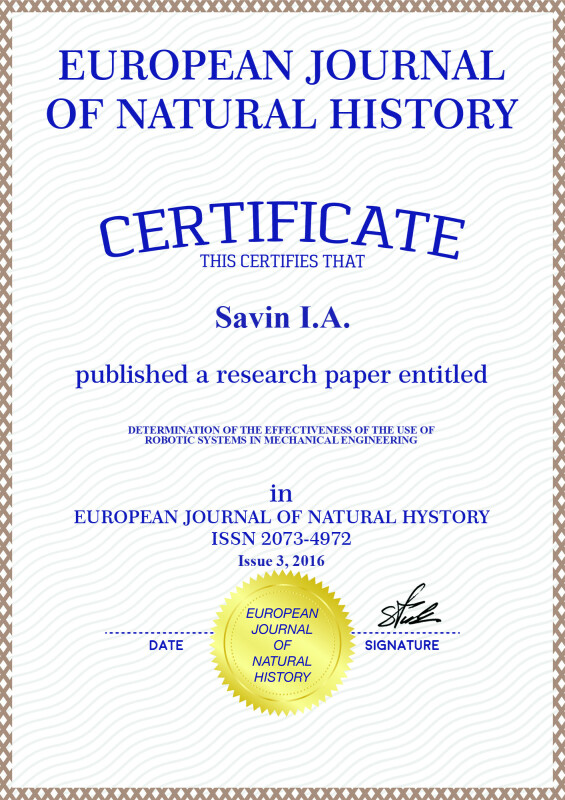 Article in PDF
281 KB
Reduced to the following with the current pace of development of science and technology the main requirement for high-performance and highly efficient production: the production must be ready and able at any moment to break even stop production of reclaimed products and in a short time begin to release any in the number of the party of new products, including those different from each other.
robotic system
efficiency

Taking into account the actual conditions of production goals of improving engineering technologies are now:

– Productivity increase in primary and secondary production, as well as in the field of technical preparation of production;

– Raising the intellectual level of work of all participants in the proceedings.

– The preservation of previously expended labor resources (physical labor of workers and intellectual work of designers, engineers and programmers).

– Reducing the cycle of design and technological preparation of production, widespread use of standardized and typical means of technological equipment and machinery by increasing their lifetime and continuity in the restructuring of production.

– Large-scale and mass production have to give a certain flexibility, while retaining all the benefits of full automation, and small-scale necessary to automate complex so that, along with the flexibility it gained mass production features – continuous, rhythmic, high rate of production output, stability of technological processes.

To solve these problems on a common basis allows the creation of flexible manufacturing systems, such as robotic technological complexes (RTC). Their basis – CNC machine tools, industrial robots and manipulators, controllers based computers. It is necessary to carry out the union of a single automation system in the group, controlled by the computer. Thus the reduction may human intervention in the production process, more than 3 times.

The analysis of machining parts at plants of mechanical engineering , identified areas, which in the long term development must be replaced by RTC. In particular, the processing details “Ball joint knuckle” item, which has more than 3 versions for different vehicles, the total annual output of more than 50 000 items. The analysis of methods and approaches of economic efficiency evaluation RTC on the example they replace outdated complex automatic line “MZAL”, which is produced machining parts.

In this case, when the introduction of RTC performed for modernization of the existing process, followed by the replacement of obsolete equipment, the cost effectiveness is determined by comparing the performance of two production variants: robotic systems of production and replace equipment.

The current methods and approaches of economic efficiency evaluation RTC have a number of disadvantages that are not pozvolya¬yut get an objective assessment of the economic impact. In the calculations of each of the criteria was not considered the time factor: neither profit nor the volume of funds invested in the project on introduction of RTC does not lead to real value. The only profit viewed as an indicator of the return on invested capital use. Currently, however, the investment return in the form of cash flow, consisting of the sum of net income, depreciation and amortization. Assessment of the socio – economic efficiency of RTC only on the basis of profit distorts the results of the calculations, overstating the estimated coefficient of efficiency and understating the payback period of capital investment. Considered criteria allow only get a one-sided assessment of the socio – economic efficiency, since they are both based on the use of time-constant initial data – the amount invested in the acquisition and implementation of RTC and the amount of profit. Thus, it can be argued that existing methods is impractical to use in a market economy, as they will distort the real assessment of the economic efficiency of RTC in the production process to handle the details.

The problem of assessing the economic efficiency of robotic technological complexes requires the determination of the main factors and sources of formation of economic results. The main purpose of determining these factors and sources available is to establish a system of levers and RTC management to achieve optimal economic and social results.

The effectiveness of the introduction of RTC will be achieved by a positive difference Z1 > Z2, costs, while the payback period to be less than 5 years.

The payback period of capital investment is calculated by the formula^

Calculation of capital costs associated with the introduction of RTC, is given by::

where KRТК – acquisition costs (development) Project RTK or pre-production costs, including the costs of research, design and technological elaboration of RTK, the cost of equipment upgrades and alterations to stations RTC, the costs of marketing and other studies; КНИОКР – he cost of R & D (research and development, design and construction of RTC, process design, manufacturing and testing of prototypes RTC correction of technical documentation and adjustment of permutation RTC) related to the introduction of RTC; KВО – expenses for purchase of auxiliary equipment for RTK operation, taking into account transport costs; KТО – he cost of purchasing basic technological equipment; KIR – acquisition costs of industrial robots; KCS – the cost of acquisition of the control system, software and certification; KET – the cost of purchasing expensive tools, equipment and RTC devices; KСМР – the cost of construction – installation work required to install RTC, as well as main and auxiliary equipment (the cost of redevelopment jobs, the costs associated with seal supply systems RTC (electric cables, pneumatic systems, air ducts); KAR – the cost of production area, including taxes on land and real estate; KОС – the amount of working capital associated with the introduction of RTC; KDP – KL – the cost of disposal of productive assets and current assets (including depreciation), net of their residual value (taking into account the selling expenses of retiring funds).

The second group of costs directly related to the use of RTC in production. Current costs are defined as ollows:

When calculating the cost-effectiveness should be considered as a synergistic effect of RTC – this increase socio – economic efficiency of robotic technological complexes as a result of the integration of industrial robots, technological and auxiliary equipment in a single system. In this case, the effect of interaction of participants of association within the system exceeds the sum of the effects of each industrial robot and robot system elements separately. To determine the synergistic effect, consider the case of interaction of industrial robots in the scheme of RTK processing details of the “ball bearing steering knuckle”. This type of line is a sophisticated form of organization of robotic technological complex. The layout of the complex elements of the robot is shown in Figure.

From the control unit, which consists of computer systems, software, information and software, control information for processing of products supplied. The products will be processed on the main equipment and industrial robots and transferred to the next process areas, going through several stages of the production cycle. The output after processing products using the RTC formed finished product, which comes in the quality control unit and transmission products. The essence of such a combination in a complex industrial robots is that a new structure that has emergent properties, i.e. by reacting three robots and processing equipment there is a synergistic effect, providing the effect of the excess of the joint operation of robots and equipment on the sum of the effects of their autonomous activity.

Mathematically, this condition can be expressed as follows:

where E1, E2, E3 – the effects of the independent, autonomous operation industrial robots, process equipment and transport device; SE – effect of their joint activities in the RTC structure.

At the same time, the larger the synergistic effect of ES, the deeper process of economic interaction and the more stable the combination of industrial robots in the complex, and the smaller the value of the ES, the less the effect of the complex and unstable; in this case the union breaks up robots and does not bring the necessary economic results.

Sources and factors of formation of the positive synergies RTC:

– Reducing the duration of the production cycle.

– A reduction of wages of workers spending.

The problem of assessing the socio – economic efficiency of robotic technological complexes requires the determination of the main factors and sources of education socio – economic results.

Key factors and sources of the socio – economic results of the introduction of robotic technological complexes in the industry: reduction of losses of working time, increasing productivity, reducing costs of primary and secondary s/n, dop.sokraschenie vnutrismennyh tselosmennyh and loss of time, execution of operations with absolute precision reduction marriage, improving the quality of the replacement of workers on the labor of industrial robots, improved working conditions, the reduction of occupational diseases and injuries, reducing the cost of routine repairs RTC, reducing the amount of current repairs of RTC, the emergence of synergies RTC, an increase of the effect of the previous sources, the reduction of operating costs RTC.

An important part of the results of the application of RTC is a social effect. It is determined on the basis of factors and sources of education effect associated with the elements of the social working conditions. On a quantitative level, the social effect can be calculated by using a specific mathematical apparatus. Total social impact of the introduction of RTC in the production process is calculated as follows:

where SBA – saving basic and additional s/n as a result of the introduction of RTC; SO – savings pay for overtime; STW – payment saving treatment workers; STD – to save on payment for temporary disability; SNP – saving by reducing losses in net profit for the illness employee; SLP – savings due to the elimination of the loss of productivity associated with hiring and dismissal; SО – saving by reducing tuition employee costs and training; SSF – savings by eliminating the need to build additional social facilities; SТТ – economies of reduction of surcharges for heavy and harmful work in implementing RTC/

Analysis of current trends in robotics development has shown that the use of industrial robots and robotic technological complexes in the industry significantly increase productivity (labor through the introduction of robots), the quality of the product (due to the absolute accuracy of the operations), which contributes to a significant reduction in production costs and obtain high returns. Analysis of existing methods and approaches for assessing the socio – economic efficiency of robotic technological complexes has shown that there is currently no method of performance evaluation, which can take into account all the factors and sources of its formation. A method for determining the costs of establishment and operation of robotic technological complexes in the industry by the example of machining a workpiece “Ball joint knuckle”, manufactured in the mechanical production.