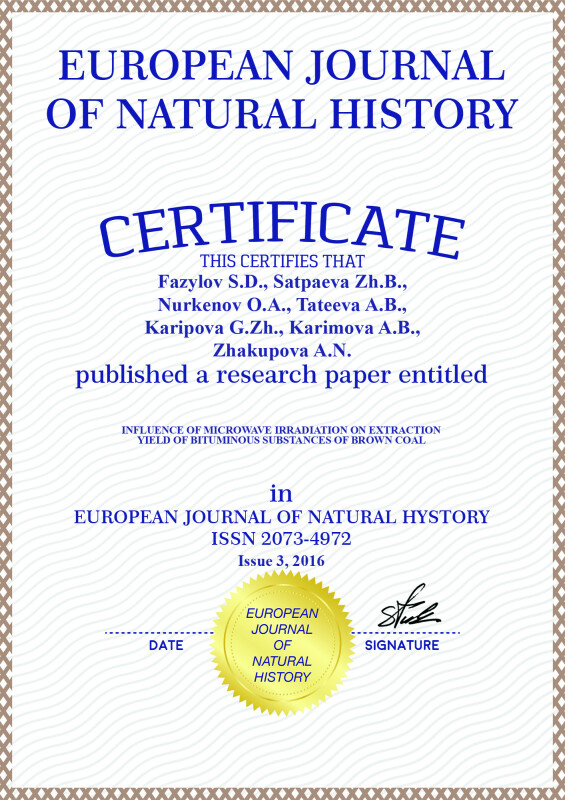 Article in PDF
196 KB
The article describes the results of the study of the pre-treatment of brown coal extraction yield of tar substances. It is shown that the use of microwave irradiation treatment increases the yield of products during their processing. It is shown that the number and composition of the target organic components extracted from coal may vary widely depending on the type of solvent and feedstock pretreatment conditions.
lignite
extraction
bitumen
demineralization
microwave effect

Raw lignite wax yielded from lignite tar by extraction with organic solvents (benzene, toluene, alcohols, etc.) is actually a mixture of wax and resin components. Mineral wax and its products due to a number of valuable properties are used in more than 200 industries [1–3]. For an acceptable cost-effectiveness, concentration of bitumen in raw coal must be higher than 6–6,5 %. However, the usual concentration found in raw coal ranges between 0,3 and 5 %. According to [2–7], pretreatment of coal with chemicals or use of physical exposure leads to an increase in output of bituminous products.

The purpose of the study was to increase the efficiency of the process of extraction of bituminous products from raw brown coal of grade B3 by application of demineralization and microwave processing.

To investigate the effect of physico-chemical methods on the yield bituminous products samples of brown coal of grade B3 from Maikuben deposits (Kazakhstan) were used. These samples had following characteristics, %: Ad 7,3, Wa 16,8, Vdaf 48,0, Sdaf 0,82, Cdaf 76,0, Hdaf 4.7, Ndaf 1,0, Odaf 18,0. Demineralization process of brown coal sample (fractions below 0,2 mm) consisted of following steps. The portion (5 g) of coal was treated with 0,2 N aqueous hydrochloric acid and underwent sessions of microwave exposure (ME) in steps of 1 min each. The total processing time was 2 hours. Microwave power varied between 70 and 750 W (Monowave 300 Anton Paar, Austria). Demineralized samples were washed with distilled water and dried 3 hours with stirring under water pump vacuum at a temperature 110 °С. The extraction process was conducted in Soxhlet apparatus for 5 hours with solution temperature 70–75 °С. Benzene and benzene-ethanol mixture (1:1) were used as solvents. The resulting extracted product was dried 3 hours under water pump vacuum at a temperature 95 °C. The yield of the extracted substances was measured by decrease of the organic carbon mass as well by weight of substances that have fallen into the extract. For the final result of the arithmetic mean value of three parallel measurements. Chromatography-mass spectrometry (CMS) analysis of individual composition of tar extract was carried out on the instrument Agilent Technologies 7890 A with mass spectrometric detector 5975 °C. The chromatograms and mass spectra were processed using the program MSD Chem Station E-02.00.493.

The following Table provides a comparative analysis of the influence of the nature of the solvents used and the method of processing the original sample to the yield of bitumen from brown coal.

As can be seen from the Table, the use of pretreatment of coal samples 0,2 N aqueous hydrochloric acid leads to increased extractability of bitumen. Additional processing of demineralized coal with microwave radiation leads to an even more significant increase, almost 2 times the output of tar substances. The highest yield of bitumen (4,6 and 3,4 % depending on the nature of the solvent) was obtained at 150 W radiation power. Further increases in radiation power is not advisable, since its effect on yield drops significantly.

CMS analysis of bituminous benzene-alcohol (1:1) extract reveal that it contain aromatic hydrocarbons (33,4–34,5 %), alkanes (25,1–6,2 %) and oxygen-containing hydrocarbons (23,7–25, 5 %). The benzene extract is observed to have a high content of aromatic hydrocarbons (37,3–38,2 %). A comparative analysis of brown coal tar substances yields reveal that demineralization and microwave exposure produce the increase in the content of carboxyl and hydroxyl groups alongside. The findings lead to the conclusion that pretreatment of brown coal and usage of microwave irradiation result in a change in composition, structure and increased yield of extractable products.