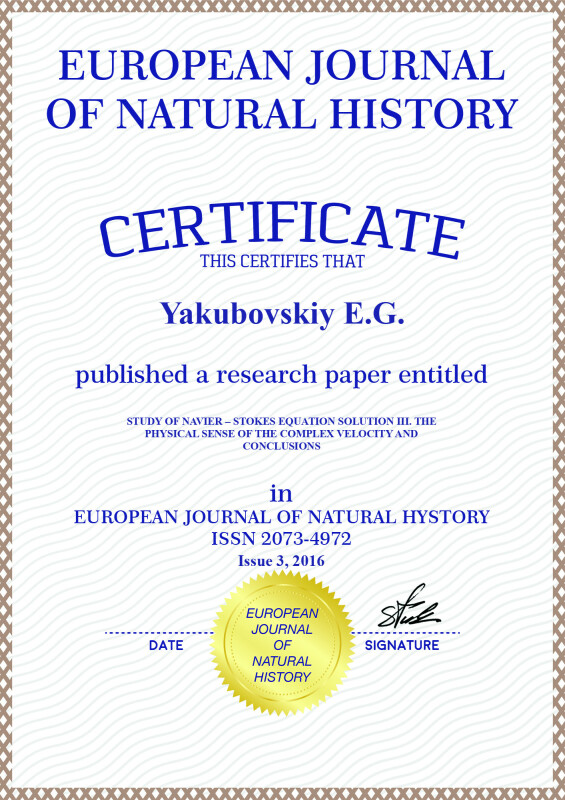 STUDY OF NAVIER – STOKES EQUATION SOLUTION III. THE PHYSICAL SENSE OF THE COMPLEX VELOCITY AND CONCLUSIONS

Let us explain physical meaning of the complex turbulent solution. So, we will consider real solution of ordinary differential equations system xα(t).

Let us assume that initial data have an average value

Here I will provide the formulation of inverse Pythagoras theorem. For any three of positive numbers a, b and c, such that a2 + b2 = c2, there is a rectangular triangle with legs a and b and hypotenuse c. Hence, mathematical mean value and mean square deviation form legs and hypotenuse is an average square root of the value. That is, average

is orthogonal to mean square deviation

which forms imaginary part of the body coordinate. Thus, the Cartesian space with oscillatory high frequency velocity (period of fluctuation is less than measurement time), obtained as a result of averaging in time, becomes complex space. That is, in case of large mean root square of the real space, it should be considered as complex three-dimensional space where imaginary part corresponds to mean square deviation. At the same time, there is following relation between variables

, and the complex number α is chosen in such a way that the imaginary part had positive or negative value. Mean square deviation satisfies this condition. But sometimes the mean square deviation is positive, for example, in case of dielectric permeability where positive and negative charges have an influence. In this case we have a formula

Here we would like to note that when calculating the flow motion and one term of a series is taken into account, it is necessary to take square root of imaginary part as forward velocity is calculated. The imaginary part corresponds to square root of oscillatory part of dimensionless velocity.

Real and imaginary parts of the solution are located on different axes of complex space. But if you average imaginary dimensionless part, you will have

And the solution is equal to the module of the last value and, for different roughness, the imaginary part of the solution should be multiplied by averaging multiplier. At the same time, if all coefficients of a series in non-linear equations system are calculated, it is not necessary to calculate square root of imaginary part. It is necessary to summarize complex values and to calculate module of the sum.

Average values are used for variables as, at molecular level, the medium is not smooth.

In case of varying over the space stationary speed, locally, this formula can be written for one plane as

and frequency is dependent on time as the phase shift is provided as a result of harmonic oscillations in neighboring points. Sum of harmonic oscillations with different time-dependent frequencies defines pulsing mode in phase space at stationary complex velocity. That is, this complex velocity defines the coordinates of phase space points pulsing in time. The situation is similar to existence of several stationary vortexes defining the pulsing rotation of the flow.

Lemma 6. Three-dimensional flow velocity can be written in the form

At that value of local velocity is

. But value of velocity obtained as a result of integration of centripetal acceleration is not zero

, but this velocity become equal to zero for the same initial point, at constant particle velocity and constant curvature radius with rotation period

, where R – curvature radius. For variable particle velocity depending on time, when one of the integrals

, which, at finite curvature radius of one sign of the trajectory, is finite and equal to

as tangential direction tl, changes sign in the course of rotation.

Tangential acceleration is defined by formula

It can be proved by use of expression

and calculation of module as product of complex conjugate vectors taking into account orthogonality of six real unit vectors.

Thus, solution of Navier – Stokes equations for not multiple balance positions is obtained. It is defined by expressions

are coordinates of balance positions.

Laminar solution corresponds to the solution of linear problem with convective term averaging; structure of turbulent solution is

is defined from initial conditions, and

. At that, the solution contains a lot of poles which, for real solution and real initial data, yield infinity.

, and, as g(t) is real, the complex solution is finite.

Now we will write a private derivative equation, will take a gradient of both parts of equation and will enter real velocity to the formula

Substituting velocity value into transformed Schrodinger equation, we have

Now we have three-dimensional Navier – Stokes equation with pressure corresponding to potential. Nevertheless, the hydrodynamic problem differs from the equation of Navier – Stokes derived from Schrodinger equation and continuity equation.

At the same time it is possible to draw an analogy between laminar single-value mode and free, single-value description of bodies.

Between turbulent mode, having finite number of solutions, and description of bound particles having finite number of solutions. In case of turbulent complex and laminar real modes there is a boundary between them and critical Reynolds number. The similar boundary is available between free and bound particles description, which corresponds to energy transition from negative to positive state. In turn, Navier – Stokes equation has to have discrete energy levels of turbulent flow states, transitions between these states with energy emission or absorption have to be realized.

And there is a boundary between free solution and solution which describes bound states. This is zero energy value and, likewise non-linear private derivatives equations, boundary exists between turbulent complex solution and laminar real solution.