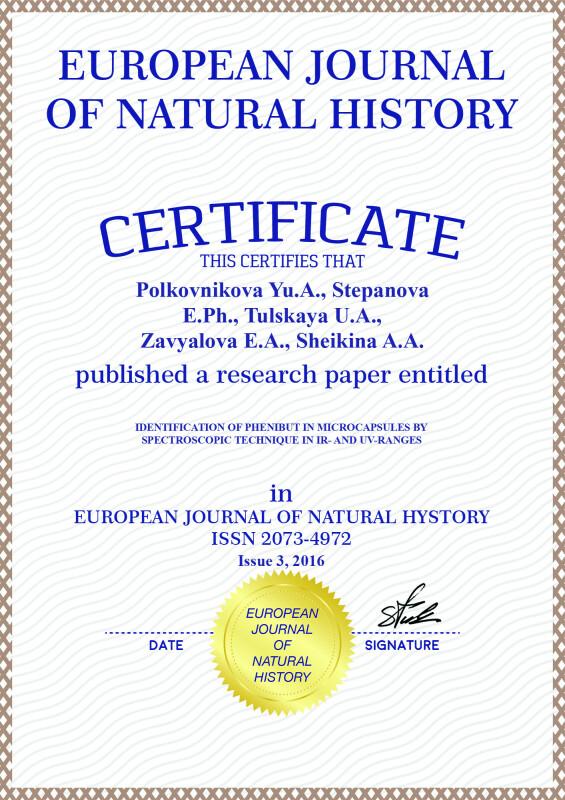 Vascular encephalopathy takes the second place in the structure of mortality as a result of circulatory system diseases. Annual death rate from the stroke is one of the highest in the world. It should be noted an important physiological role of gamma aminobutyric acid (GABA) in the regulation of the functional activity of central nervous system for these kinds of diseases.

At present, the establishment of the new drug formulations for such derivative of GABA as phenibut characterized by a prolonged action is quite actual [1].

In order to obtain a prolonged action microcapsules seem to be rather perspective formulation [2, 3, 4]. Microcapsules of phenibut were obtained by extrusion technique.

Object of the research work was to perform a qualitative estimation of the components compatibility comprising a composition of the established drug formulation, namely, microcapsules.

IR-spectra were surveyed with Vertex 70 spectrometer (Bruker Optik GmbH, Germany), in the middle part of IR-region in the range of 4000–400 cm–1 applying ATR technique (attenuated total reflectance method), using ZnSe attachment with the diamond window; as a result, IR-absorption spectra were obtained for phenibut substance, placebo-microcapsules and microcapsules with phenibut.

In addition, in order to identify phenibut in the microcapsules spectrophotometry technique was also applied in the UV-region of spectra at the wavelength of 257 ± 2 nm with spectrophotometer Hitachi U-1900. Identification technique was as follows: an accurately weighted sample of phenibut microcapsules of 0,3 g in mass was placed in volumetric flask of 50 ml capacity, then added 0,1 М of hydrochloric solution and stirred for 45 minutes in the agitator, then developed the volume of solution with the same solvent up to a specified label, and filtrated solution through a paper filter. 5 ml of the obtained filtrate were transferred to the volumetric flask with a capacity of 25 ml, and then developed the volume of 0,1 M solution of hydrochloric acid up to a specified label. 0,1 M solution of hydrochloric acid was applied as a reference one.

Results of investigations and their discussion

Results of IR-spectroscopy study for a substance of phenibut, microcapsules-placebo and microcapsules with phenibut are presented in Fig. 2.

Comparison of IR-spectra made it possible to identify phenibut substance in the microcapsues. IR-spectra of the substance and microcapsules with phenibut within the range of 4000–400 cm–1 show absorption bands at 3050–2800 cm–1, meaning the presence of the primary aliphatic aminogroup in the samples; while the bands at 1712, 1656, 1668, 1620 indicate at the presence of carboxylic group in the same samples and thus allowing to state that chemical interaction between the chosen components of the mixture is absent.

Fig. 3. Absorption spectrum of the tested solution of phenibut

It is recommended the use of spectroscopy technique in IR- and UV-ranges for the verification of identity of the phenibut substance in microcapsules.

The research was performed under financial support of RFBR in the framework of scientific project № 16-34-50140 mol_nr.

The work is submitted to the International Scientific Conference “Fundamental and applied research in medicine”, Netherlands (Amsterdam), October 20–26, 2016, came to the editorial office оn 07.06.2016.