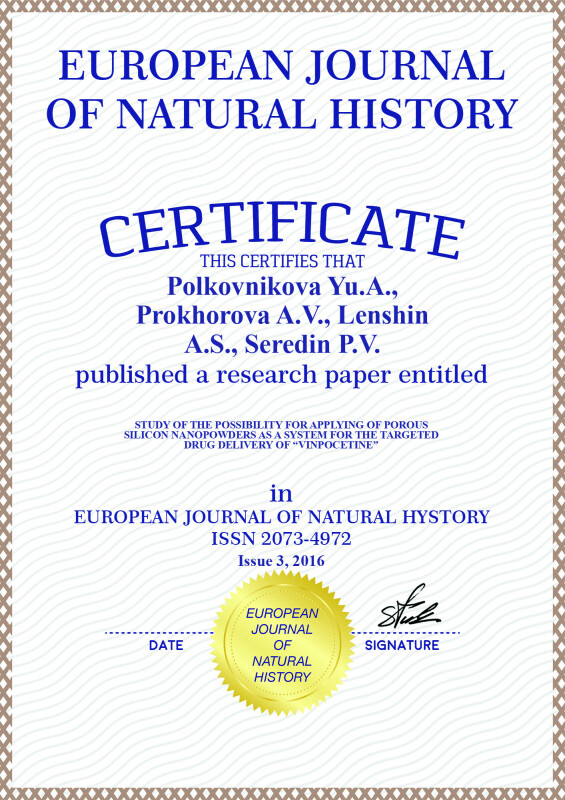 Nowadays diagnostics and treatment of disorder of the cognitive functions is one of the most intensively studied areas of the modern neurology. Vinpocetine is one of the widely used medicinal preparations for the treatment of such kind of diseases [1]. Presently vinpocetine is produced in the form of pellets containing 5 and 10 mg of the drug. Such drug dosage form proves to be rather efficient but it does not provide the desired prolonged effect [2]. Moreover, chemical structure of vinpocetine can be the reason of instability of this drug dosage form.

Therefore, now an actual problem is the elaboration of stable and biocompatioble drug dosage forms with the delayed release of vinpocetine.

One of the prospective ways for solution of this problem is the development of systems for the targeted drug delivery based on silicon nanoparticles including those ones obtained from porous silicon. It is well known that these systems are biocompatible and biodegradable [3]. Now quite successful attempts in the use of porous silicon nanopowders in the systems of the targeted drug delivery are presented in scientific community [4].

The purpose of this work is the elaboration of vinpocetine delivery system on the basis of porous silicon and the study of efficiency of the processes concerned with adsorption and desorption of the medicinal preparation in this system.

Materials and methods of research. Porous silicon nanopowder was obtained according to a standard procedure using electrochemical etching of silicon in the alcoholic solution of fluoric acid [5], followed by ultrasonic grinding. Specific surface area of the porous silicon nanopowder was of ~ 60 m2/g. Some features in morphology and composition of the particles used in the work are presented in [6].

The obtained nanopowder was submerged into 5 %-solution of vinpocetine (ND 42-9175-03) for 20 and 60 minutes. Adsorption of the drug onto porous silicon was controlled by IR-spectroscopy method with the use of VERTEX 70 Bruker spectrometer. Kinetics of vinpocetine release from the nanoparticles into 0,1 M solution of hydrochloric acid was determined at the temperature of 37 ± 0,5 °C. The volume of dissolution medium was of 100 ml. Dialysate tests (5 ml) were sampled after strictly determined intervals of time (15, 30, 45, 60, 90, 120 minutes). Required amount of medium was supplied with the same solvent. In order to determine vinpocetine content spectrophotometric method in the UV-spectral range (314 ± 2 nm) was applied. Concentration of the analyzed substance was determined by the calibration plot. Producing of vinpocetine microcapsules with the shells made of gelatin, ethylcellulose and sodium alginate as well as the procedure of biopharmaceutical investigations for these drug forms can be found in [7].

Results of research and their discussion. Comparative analysis of IR-transmission spectra for nanopowders of porous silicon in the range of 400–4000 cm–1 after deposition of the drug with those ones of the primary powder of porous silicon and vinpocetine substance demonstrated the presence of the bands characteristic of the medicinal preparation in the samples (absorption bands at 1720, 1680 and 1607 cm–1). Note that composition of the porous silicon particles according to IR-spectroscopy data did not considerably change [8].

The performed study showed a possibility of using porous silicon as an agent of prolonged vinpocetine delivery and significance of the further pharmacologic investigations of this system.

The work is submitted to the International Scientific Conference “Fundamental and applied research in nanotechnology”, Germany (Munich), November, 1–6, 2016, came to the editorial office оn 07.06.2016.