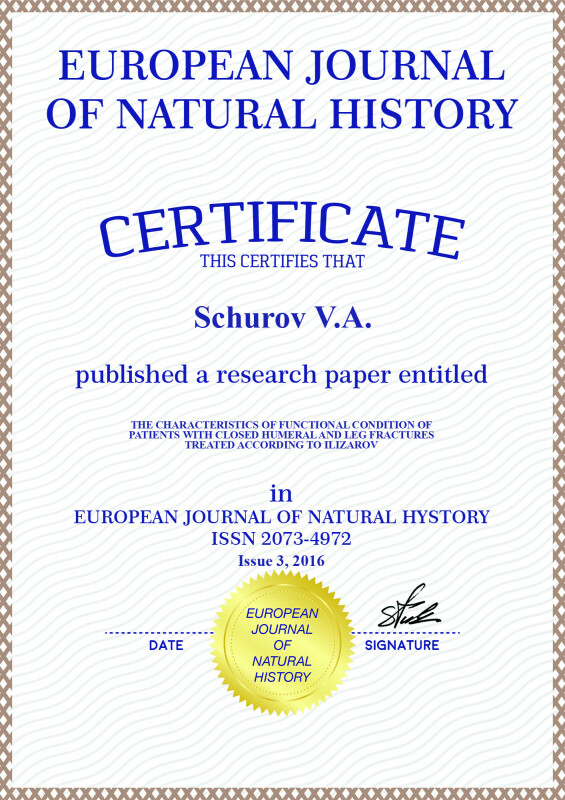 Article in PDF
584 KB
The authors performed a comparative examination of the rigidity of bone fragment fixation and the regenerated bone blood supply in two groups of adult patients with closed humeral bone fractures (n = 35) and leg fractures (n = 35) under treatment according to Ilizarov. They found that in case of humeral injuries the tolerated functional load of the limb is considerably lower, and the strain-gauge registered micromobility of bone fragments is 3-fold higher for graduated load of limb segment. In case of humeral fractures circulation rate in the regenerated bone vessels increases and normalizes faster.

An opinion about the absence of the principal differences in regeneration of human upper and lower limb fractured bones formed a priori on the basis of the data about regeneration of the fore and hind limb fractured bones in experimental animals. Ilizarov when treating patients with closed fractures of both humerus and leg bones recommended to adhere to the same optimal periods of fixation – 54 days [1]. In this case it was not taken into account that the lower limbs unlike the upper ones perform a weight-bearing function.

The working ability descent while maintaining locomotor activity is a characteristic of functional condition of patients during humeral fracture treatment. Both the proximity of the humeral proximal part to the trunk and the need to maintain movements in the elbow make it impossible to use the typical set of the Ilizarov fixator supports used for treatment of patients with leg bone fractures when treating a humeral fracture [2]. The characteristics of bone blood supply which is more intense in the humerus are of great importance for achieving bone fracture union [3, 4, 5].

The purpose of this study was to compare the ability to static functional loading of humerus and leg, as well as the rigidity of bone fragment fixation and regenerated bone blood supply when treating closed shaft bone fractures of these limb segments according to Ilizarov.

Scope and Methods of the Study

Two groups of patients were examined. Group 1 included 35 patients with closed humeral shaft fractures under the conditions of treating by Ilizarov method. The patients’ age was from 26 to 66 years (40 ± 3), there were 10 women among the patients, the period of fixation at the time of examination was from 3 to 94 days (22 ± 6). Group 2 included 35 mature patients with closed leg bone shaft fractures under treatment according to the Ilizarov method.

When graduated, stepwise increasing (by 5 kg) axial loading of the appropriate limb the micromobility of humeral or tibial bone fragments revealed in all the patients [7]. In this case, using a tensostation and B7-73/1 voltmeter a signal registered which during re-registration allowed to reveal a change in the distance between the wires extending from the bone above and below the zone of fracture.

Moreover, using a sensor with the carrier frequency of 8 MHz of Angiodin-2KM computed diagnostic complex by BIOSS (Russia) Production Association the circulation rate in the zone of fracture was registered along the tibial anterior-internal surface or the humeral external surface when stepwise increasing functional loading of the leg or humerus (Fig. 1).

Statistical processing was made using Microsoft EXEL-2010 data analysis package. Student t-test was used to assess the reliability of result differences. Correlation and regression analysis methods were used as well.

Results of the Study

The most significant differences in the parameters of the patients from two groups revealed when limb functional loading assessed. While the most of patients with leg bone fractures were able to transfer their body mass to the injured limb, maximum load in patients with humeral fractures was 15,9 ± 1,3 kg, and it was accompanied by pain.

Fig. 1. The definition of the functional load on the shoulder and lower leg in the treatment of fractures by Ilizarov

Fig. 2. Dynamics of bone fragment micromobility during treatment of patients with humeral and tibial fractures

Fig. 3. Dynamics of circulation rate in the vessels of humeral and tibial regenerated bone

The rate of regenerated bone blood supply depended significantly on the rigidity of bone fragment fixation. As far as fragmental micromobility increased to 180 µm/10 kg, circulation rate increased both in Group 1 patients and in Group 2 ones with leg bone fractures. Lower values of local blood flow intensity observed for larger values of micromobility.

When making the test with increasing axial loading of the humerus the rate of blood arterial flow began decreasing. When 15 kg load achieved, a temporary increase in the value observed that associated with the decrease in intramural pressure in the arterial wall and with decreased vascular resistance (Fig. 4). Further pressure increase led to a rapid decrease in circulation rate due to mechanical overlapping of the vascular bed and pain occurrence.

Fig. 4. Dynamics of circulation rate in humeral regenerated bone when increasing the functional static load of the limb

The same dynamics of the change in circulation rate also observed for increasing the leg load. Higher intravascular pressure (the effect of additional hydrostatic pressure the value of which exceeds 70 mm Hg) is known to be characteristic of the leg vessels in standing position. When the patients examined in standing position the rate decrease observed as far as the limb functional load increased. The value relative increase revealed through the steady decrease in circulation rate when 20 kg load achieved. This suggests that the vessels of the leg regenerated bone are better protected against the exposure of the load from outside. This protection is determined by the higher values of hydrostatic pressure and, apparently, by morphological characteristics of the regenerated bone.

Thus, the existing difference in functional mission of the upper and lower limbs in humans leaves its mark on their condition in the period of bone fracture treatment. Even under the Ilizarov method using the humerus ability to endure the functional load is 2–3-fold less comparing with the leg. The regenerated bone pliability during humerus treatment is significantly more when testing functional load. Circulation rate after humeral fracture increases in the first days after injury, and it increases during the first week after tibial injury. In the patients from Group 1 the protection of circulatory bed against the applied axially oriented load in Group 1 patients is less efficient.