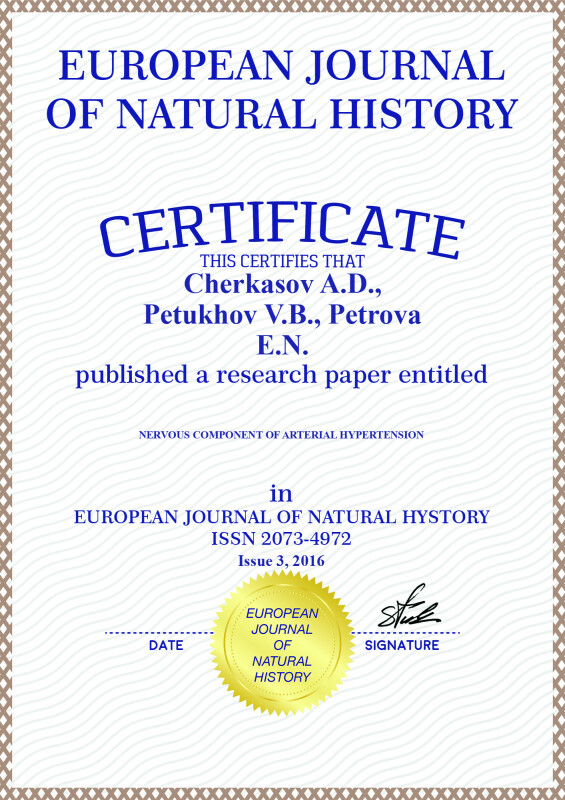 World Health Organization (WHO) experts believe that 85 % of the causes of arterial hypertension (AH) are unknown, while 5 % are caused by a kidney disease. Prevention of hypertension development includes weight control, reduce intake of alcohol, increasing physical activity, restriction of salt intake, stopping smoking, restriction of fat consumption. A meta-analysis of randomized controlled trials shows that aerobic exercise endurance decreases SBP and DBP at rest on 3,0/2,4 mm Hg. The influence of exercises on hypertension remains little studied. In the treatment of hypertension WHO experts recommend only drug therapy.

Nowadays, medicine believes that hypertension is incurable and a patient for life needs to take medicaments. However, there is a way out of this impasse. We must return to the principles of normal physiology, i.e., identify and eliminate the nervous component of hypertension. Currently, primary hypertension is of special importance. We believe that addressing the causes of primary hypertension can prevent the development of the disease.

Analysis of the mechanisms of control of the tone of blood vessels shows that all of these mechanisms are of short duration. Vascular baroreceptors and neurons of vasoconstrictor nerve center are being adapted to increased pressure within 1 hour and thus are not responsible for hypertension. Hormonal mechanisms operate for several days. Renin-angiotensin system plays an important role in normalization of blood circulation at pathological decrease in blood pressure as well as at blood loss due to trauma. This mechanism is also not related to hypertension. The only mechanism for the regulation of blood pressure that remains is the relation between intravascular blood volume and capacity of vessels. It is shown that a low (2–3 %) permanent increase in the volume of liquid in the circulatory system at shutdown of neural regulation leads to an increase in blood pressure by almost 50 % [1, 2]. Thus, the main mechanism responsible for the long-term increase in blood pressure is kidney control system of volume of fluid in the circulatory system.

The aims of investigation:

1. Analysis of the causes of primary hypertension.

2. Study of the effect of physical exercises on the development of primary hypertension.

Within 3 months we were able to observe the development of hypertension from the very beginning and use the experimental non-drug exposure to normalize blood pressure. Our 60-year-old patient (weight 74 kg, height 174 cm, the absence of chronic kidney diseases or any other chronic diseases for more than 20 years) was engaged in running during 20 years and, until recently, had stable pressure 125/80. After a prolonged stress, our patient first suffered a sympathetic-adrenal crisis – the pressure was 193/90 and the pulse 57–60. After the end of the sympathetic-adrenal crisis the state of resistant hypertension occurred – the upper pressure of 160–180, the lower pressure of 110–120, with the pulse of 100–110 at rest. Taking drugs to lower blood pressure had no effect. The blood pressure remained at this level during more than two weeks before the patient sensed pain in the lower back in the 8–12 thoracic vertebrae and the 1–2 lumbar vertebrae. The patient has received massage of the muscular system of the spine. During an hour after the massage the pressure decreased from the level of 150/103 to 137/86, and after 2 hours stabilized at 130/83, which is a normal level for our patient. However, the patient continued suffering from chronic stress, and 2 weeks after the first massage session the pressure rose again and reached the level of 160/100. Later two massage sessions were held with a blood pressure control. In the first case, there was a decrease of pressure from 176/97 to 136/83 after the massage. In the second case, there was a decrease of pressure from 160/97 to 137/88 after the massage. By the end of the day the pressure increased slightly, but did not reach the initial high level.

The patient participated in three series of experiments:

1) 8 days of Tibetan gymnastics on the shores of the warm sea;

2) 7 experimental rounds of running, each consisted of 3 stages, 1650 meters each stage, at a speed of 10 kilometers per hour, and gymnastic exercises for the spine after each stage;

3) 10 experimental runs, 5 kilometers a day, at a speed of 10 kilometers per hour and Tibetan gymnastics exercises for the spine after jogging.

The execution of each series of experiments resulted in normalization of blood pressure.

Analysis of the causes of hypertension

With increasing pressure by 1 mm Hg the water excretion by the kidneys is increased by 100 %. The volume of water that is removed by the kidneys increases by 8 times even when the blood pressure increases only by 10 mm. Hg. This is the mechanism of stabilization of blood pressure under control of the hypothalamus. For denervated kidneys, the characteristic “pressure – the rate of water transport” is decreased in 6–8 times.

From the course of anatomy it is known that the kidneys are innervated and controlled by sympathetic division of nervous system along the neural pathways: baroreceptors – hypothalamus – neural pathways in the spinal column coming out of the spine in the 9–11 thoracic vertebrae – the nerve center – metasympathetic part of the autonomic nervous system located in the walls of the kidneys. The compression of nerves passing between the intervertebral muscles evokes a violation of the transmission of nerve impulses to the kidneys and, therefore, a violation of hypothalamus-controlled fluid transport. In such a case regulation of the fluid transport falls exclusively on metasympathetic nervous system (MSNS) of kidneys. The effectiveness of MSNS is 3–4 times lower than management by the sympathetic nervous system. Consequently, the most likely explanation of the occurrence of hypertension is that the blood pressure increases as a result of violation of evacuation of fluid from the circulatory system. Renal “valve”, discharging fluid from the circulatory system into the bladder, is “installed” to a higher pressure level. In the absence of signals from the hypothalamus, the renal blood pressure regulator continues to maintain a stable blood pressure, but on a much higher level. In fact, we are dealing with a functional partial denervation of the kidney. In our opinion, this is the main cause of hypertension.

Observation of our patient with initial stage of hypertension caused by neurosis fully confirms the conclusions drawn on the basis of our analysis. Pathological chain of hypertension development for our patient is as follows. Long neurosis caused hypertonus, and then spasms of the muscles in the lower thoracic intervertebral department of the spine. The patient felt pain in the spine at this place. Manual therapist discovered the presence of hard and painful intervertebral muscles in this area. Muscle spasm caused compression of the renal sympathetic nerves emanating from the spine in that region. Compression of the renal nerves resulted in disruption of the control of liquid transport through kidneys. Metasympathetic nervous system of kidneys increased the level of blood pressure regulation, which led to hypertension.

Massage of spinal muscular corset has eliminated spasms of the muscles, and within an hour the pressure returned to normal. However, neurosis continued to maintain hypertonicity of intervertebral muscles in the area of exit of sympathetic nerves innervating the kidneys. The remaining muscle hypertonicity can be removed with the help of gymnastic exercises for the spine. The same thing happened after the removal of neurosis while relaxing in the warm sea. Thus, the case of our patient is not “vascular neurosis” described by Lang, but “renal neurosis”.

To summarize, the rapid rise of pressure (during less than an hour) under stress is due to the vascular response. Transient pressure rise, from an hour to several days, may be caused by the direct effects of stress on the center of regulation of water transport in the hypothalamus. Long-term stable hypertension, lasting for years, is caused by conduction abnormalities of the renal sympathetic nerves exiting the spine as part of the spinal nerves.

Rehabilitation measures to restore the sympathetic innervation of the kidneys (massage, exercises for the spine and complete rest) can prevent the development of hypertension at its initial stage. At later stages of hypertension, it is very likely that degenerative processes arise in the sympathetic innervation and in metasympathetic nervous system of kidneys, which does not allow a quick victory over hypertension. However, this does not mean that rehabilitation measures will be useless. To normalize the blood pressure for a long time, it is necessary to do a series of massage of a spinal muscular corset and to perform regularly, preferably every day, exercises for the spine.

1. The initial stage of hypertension is most likely caused by violation of the sympathetic innervation of the kidneys.

2. Rehabilitation measures aiming to eliminate spastic states in the intervertebral muscles, and to recover the renal sympathetic innervation (massage, exercises for the spine and complete rest) can prevent the development of hypertension at its initial stage.