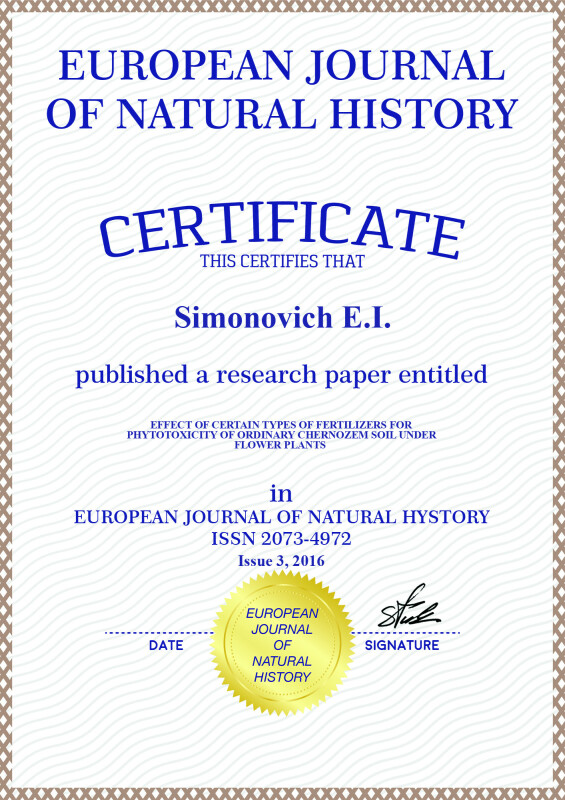 Article in PDF
215 KB
The studies under plants – Echinacea purpurea (Echinacea purpurea Moench.), Cheiranthus cheiri and Tagetes patula L. on ordinary chernozem soil, it was found that under the plants Echinacea third year of soil phytotoxicity embodiment, except for “Pocon” decreased 2,5–3,8 fold. In the version with “Pocon” soil toxicity on the contrary increased by 2 times. Under Erysimum cheiri plant (Cheiranthus cheiri L.) in ordinary chernozem soil was found that the phytotoxicity of the soil on the above embodiments with fertilizers studied than in controls, but is reduced after two months is 1,4–1,5 times. Under Tagetes patula L. fertilizer “Belogor” and “Pocon” reduced toxicity of ordinary chernozem soil at 1,1–1,5 times, compared to the control during the entire growing season. Most greatly reduces the toxicity of the soil fertilizer “Pocon”.

The introduction of soil cover many cultivated areas exposed to various influences: mechanical, chemical in making fertilizers and pesticides, pathogens are affected, etc. As a result of the disturbance, the soil becomes toxic for growing crops and requires the use of methods of improvement. Currently, for pollution control components of the environment, including soil and uses a number of tools biological assays. Biological methods to more objectively reflect the ecological status of the system, in particular, the self-cleaning capacity of the soil, its response to a particular stimulus. The biological method is highly effective in determining the total soil phytotoxicity, simple to perform, allows you to quickly assess the overall ecological condition of the soil. The principle of the method of bioindication based on establishing the relationship between soil toxicity and the effect of his actions on the test object. The main requirement to the test object is a high sensitivity [2].

At the present level of economic development of the pollution of the biosphere as a whole, and the soil in particular, waste management, emissions and wastewater of all kinds of industrial production, agriculture, public utilities, cities have become global and serious concern in connection with the sharp deterioration of the ecological and geochemical condition of soils – the main component of the natural environment and the negative impact on human health [5]. Improving and maintaining soil fertility – is one of the most important and difficult tasks of practical and theoretical activity of the person. Crop yields and intensity of microbiological processes in the soil, are directly dependent, therefore become important ways to increase microbiological processes in it. One of these ways is to fertilization [4; 6].

Soil fertility is also largely determined by the state phytosanitary agrophytocenosis. Phytotoxicity soil caused by the accumulation of physiologically active substances, among which there are phenolic compounds, organic acids, aldehydes, alcohols and others.

The purpose of this study – to identify the impact of different types of fertilizers on phytotoxicity of ordinary chernozem soil.

In this regard, the objectives of the study included a comparative study of the effect of organic and microbial fertilizers on phytotoxicity of ordinary chernozem soil.

The studies were conducted on the territory of the Southern Federal University Botanical Garden, from may to september 2012–2014 years for plants – Echinacea purpurea (Echinacea purpurea Moench.), Cheiranthus cheiri and Tagetes patula L. – on ordinary chernozem soil.

The study of the efficiency of fertilizers were carried out under the following scheme, including the options: 1 – control, 2 – concentrate microorganisms “Belogor”, 3 – liquid fertilizer “Pocon” with trace elements. Repeated options – 3 fold. Fertilizers were added 2 times in may. Watering was carried out over a plant fertilizer solution (100 ml/10 liters of water) at the rate of 400 l/ha (dose recommended fertilizer producers). Plants were watered reference plot with the same amount of water.

Soil samples (0–25 cm) were taken by variants of the experiment after 1 and 3 months after fertilizer application. Phytotoxicity was determined by soil bioassay using radish seeds [1, 4]. Data on the activity of seed germination were converted into conventional units uke (coumarin conditional units).

Soil fertility is largely determined by the phytosanitary condition of the soil, ie soil clean of weeds, pests, pathogens started, as well as toxic substances emitted by plants, rhizosphere microflora and decomposition products. Phytotoxicity soil caused by the accumulation of physiologically active substances, among which there are phenolic compounds, organic acids, aldehydes, alcohols and others. The combination of these substances called colin, composition and concentration of which depends on temperature and soil moisture by microorganisms and plants. At low concentrations in soil phytotoxic substances detected stimulatory effect, but with increasing content of strong inhibition occurs the growth of plants or germination of seeds.

Source of education and income of toxic substances in the soil – root exudates of plants, post-harvest crop residues and microbial metabolism products. The most intensively phytotoxic substances accumulate in the cultivation in the same place or close in homogeneous cultures and biology to create anaerobic conditions in soil. Adding of mineral and organic particularly (microbiological) reduces the fertilizer in the soil microbial population toxic [2].

Echinacea is characterized by the presence of compounds with high biological activity: phenolic compounds, organic acids, saponins, essential oils, etc. These substances may accumulate in the aerial parts, roots and rhizosphere soil and released to the environment, determining the level of soil toxicity. Studying the toxicity of soils under culture Echinacea is important in its introduction in order to create highly productive crops.

After 1 month after the application of fertilizers on soil toxicity variant with fertilizer “Belogor” decreased by 1,8 times, compared to the control. When using the mineral fertilizers “Pocono” soil toxicity increases in the 3 times (Table 1).

It was found that the phytotoxicity of chernozem ordinary under Echinacea purpurea plants of different ages is not the same: with increasing age decreases the toxicity of the soil. In 2010, under the plants Echinacea third year of soil phytotoxicity embodiment, except for “Pocon” fell in 1,2 times. In the version with “Pocon” soil toxicity on the contrary increased by 2 times.

Fertilizing of culture Echinacea purpurea positive impact on the development of plants. The most effective action on the growth of Echinacea purpurea concentrate has “Belogor” microorganisms [3], due to increased mineralization of humus. Number of batteries in the soil increases, respectively, improves root nutrition of plants and increased crop yields [7; 8].

As a result of research at the Botanical Garden SFU, from May to September 2014 under Erysimum cheiri (Cheiranthus cheiri L.) plants on ordinary chernozem soil it was found that the phytotoxicity of the soil on the above embodiments with fertilizers studied than in control, but two months later she was reduced by 1,4–1,5 times. Under the control of soil toxicity practically remained unchanged (Table 2).

However, it was found that, despite the increased phytotoxicity of ordinary chernozem soil under Cheiranthus cheiri on microbiological fertilizer variants “Belogor” mineral and “Pocon” plants had more optimal morphological parameters compared to the control (Table 2) [10].

When fertilization under Tagetes patula L. was found that fertilizer “Belogor” and “Pocon” reduced toxicity of ordinary chernozem soil at 1,1–1,5 times, compared to the control during the entire growing season. Most greatly reduces the toxicity of the soil fertilizer “Pocon” (Table 3) [9].

Adding microbial and mineral fertilizers had a positive impact on the reduction of phytotoxicity of ordinary chernozem soil in comparison with control, and as a result of plant morphological indicators that allows us to speak about the prospects of the use of these fertilizers [3; 6; 7; 8; 9; 10].