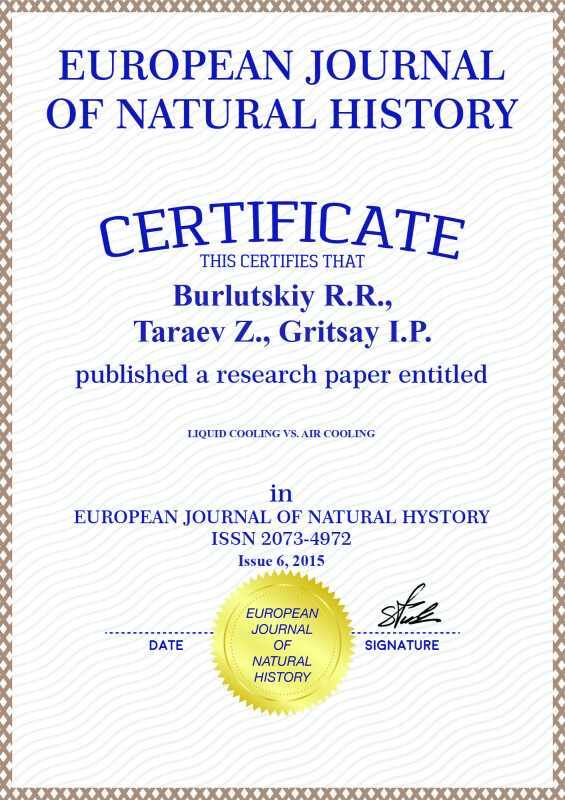 What will happened to your PC, if you let it to be overheated? The PC will just burn out. When the processor’s temperature increases by 10 degrees, its shelf life is reduced by half. But even half a reduced life spans CPU longer than its “relevance”.

The main reason for cooling CPU is its unstable work and, as a result, the output of the processor down above a certain critical temperature for a certain period of time (often quite long). You can’t escape from heat, but this problem has many solutions. Currently there are many cooling systems, they all use a common principle of operation – the transferring of heat from a hot body (cooled object) to the less hot (water cooling system). Don State Technical University students are working on improving one of the cooling methods – a liquid cooling system. They are proving that a liquid cooling system is better than a traditional air cooling system, and it is worth an effort putted in researches for improving it.

The secret to harnessing the cooling power of air lies in fans. Your typical air-cooled PC is packed with case fans, graphics card fans, and a CPU fan. They are positioned atop a big metal heat sink to keep computer expensive components nice and frosty.

A water-cooling system, on the other hand, employs a series of coolant-filled tubes, a radiator, water blocks (the equivalent of heat sinks), and a couple of other components to keep your PC being refreshed. However, that system will cost up to $500, while air cooling will cost about $120.

Let’s compare both of these systems: thermal conductivity of water is 25 times better than thermal conductivity of air. It means that it will be much more efficient, plus, water pumps are less noisy than fans (25–40 dB – water cooling against air cooling, that can make noise louder than 42 dB).There is also the issue of space. A huge heat-sink/fan combination might perform well enough, but the best CPU coolers eat up a ton of real estate inside your computer case. Liquid cooling requires less space, and it looks a lot niftier to boot. You can’t discount the cooling factor of a case full of colorful, liquid-filled tubes.

There are two reasons why a computer might need the increased thermal conductivity and heat capacity of water:

1. Its electronic components produce more heat than the air around them can absorb.

2. The fans required to move enough air to cool all the components make too much noise or use too much electricity.

In liquid-cooling systems water in pure form is rarely used as a coolant (it is connected to the electrical conductivity and corrosion activity of water). It is often distilled water (with various additives anti-corrosive nature), sometimes – oil and other special fluids.

Most computers dispel heat with heat sinks and fans. Heat sinks are basically pieces of metal that provide lots of surface area for the air to touch. The chip warms the heat sink, the heat sink warms the air, and the fan moves the warm air out of the PC case.

This system works most of the time, but sometimes, electronic components produce more heat than simple air circulation can dispel. High-end chips with lots of transistors can overwhelm an air-cooling system. So can chips that have been overclocked, or manually set to work at faster than their default speed.

There is also a way to get into liquid cooling with an all-in-one loop. It consists of a single closed loop with a radiator on one end and a pump/water block combo on the other. It is fairly easy to use.

So, which is better air cooling or water cooling? The answer depends on your particular usage needs.

One size does not fit all when it comes to case cooling, but most people can get by with fans alone. It is easy, and it is cheap. If, on the other hand, you are an enthusiast who needs the best cooling possible for your flaming CPU and a gaggle of graphics cards, a DIY water-cooling setup is in your future. Finally, try a sealed liquid cooler if you are considering liquid cooling either to keep your overclocked processor chilled or simply to benefit from reduced system noise.

The work is submitted to the International Scientific Conference «Scientific space centers and global achievements», came to the editorial office оn 18.02.2016.