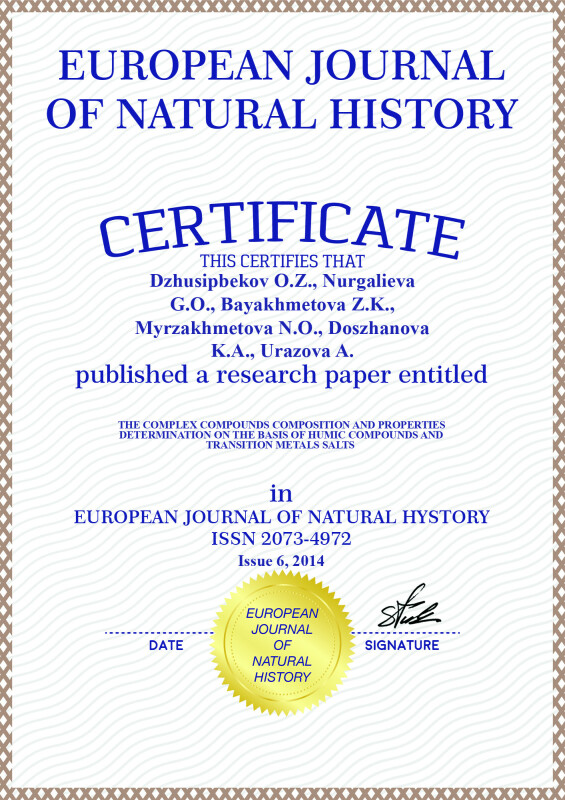 Kazakhstan is entered into the world’s top decade powers – the real leaders in the coal reserves, behind China, the USA, Russia, Australia, India, South Africa, Germany, and the Ukraine. So, the total geological reserves are estimated at 150,0 bln. tons, 37 % of them are presented by the brown coals. According to its characteristics and calorific and thermal properties, the brown coal is inferior to the black coal; it has the high ash content, and the great content of the volatile substances, thereby, the lignite is inclined to the spontaneous combustion. The direct combustion of the brown coal is resulted in the environmental pollution by the nitrogen and sulphur oxides, and also by other harmful substances. So, in the world practice, by the new technologies, the lignite coals are processed to be produced the combustible gases, the liquid fuel, the fertilizers, and also the other products for the various branches of industry and agriculture [1]. For all this, it is quite possible to be obtained more, than 170 names of the chemical products. The significant link in the complex processing of the brown coal is to be obtained the humic compounds. The humic compounds are possessed the large spectrum of the biological activities; they are environmentally friendly clean and safe to be used, they are performed the functions of the natural detoxicants and adaptogens [2, 3].

In this regard, the complexing properties research of the humic substances with the transit and heavy metals is presented of the great interest. So, the regularities of the various factors influence on the interaction processes in the complex heterogeneous systems «the sodium humate – ferric sulfate (III)» and «the sodium humate – cobalt nitrate» have already been studied. The experimental data have already been shown, that the temperature rise up to 80 °С and the process time up to 120 min, the humic substances yield is being increased up to 54,65 % and 54,55 %, respectively, for the iron sulfate and cobalt nitrate, and the amount of the bound iron with the humic acids and the cobalt, respectively, is being increased up to 20,23 g-eq. and 15,76 g-eq.

The Content of the Samples Functional Groups, Having Obtained at the Different Normal Salts

The functional analysis of the received samples has been shown (e.g. see the Table), that the carboxyl groups are more bounded with the iron, than with the cobalt, and the largest substitution of the phenolic hydroxyl groups for the metals are observed in the samples, having obtained at the cobalt nitrate using.

For example, at the interaction of the ferrous sulfite with the sodium humate, the number of the bounded with iron the carboxyl and phenolic groups is being increased up to 0,5448 and 0,6492 mg-eq. per 100 g of the organic mass, and at the interaction with the cobalt nitrate (II), respectively, up to 0,4479 mg-eq/g and up to 0,6586 mg-eq/g. However, in general, the complete substitution of the carboxyl and phenolic iron and cobalt hydroxyls does not occur. This is indicated, that other functional groups are practically involved in the complex formation reactions.

Thus, in the course of the carried out works, it has been set the different dependence of the yield of the humic substances and the number bounded with the humic acids of the iron and cobalt from time, temperature, ratios S:L, and salts norms. The formation of the complex compounds of the humic substances with the iron and cobalt has been revealed by the chemically and chemical – physically methods, their composition and properties have also been studied.

The work is submitted to the International Scientific Conference «Ecology and rational nature management», Italy (Rome-Florence), December, 20–27, 2014, came to the editorial office оn 11.12.2014.