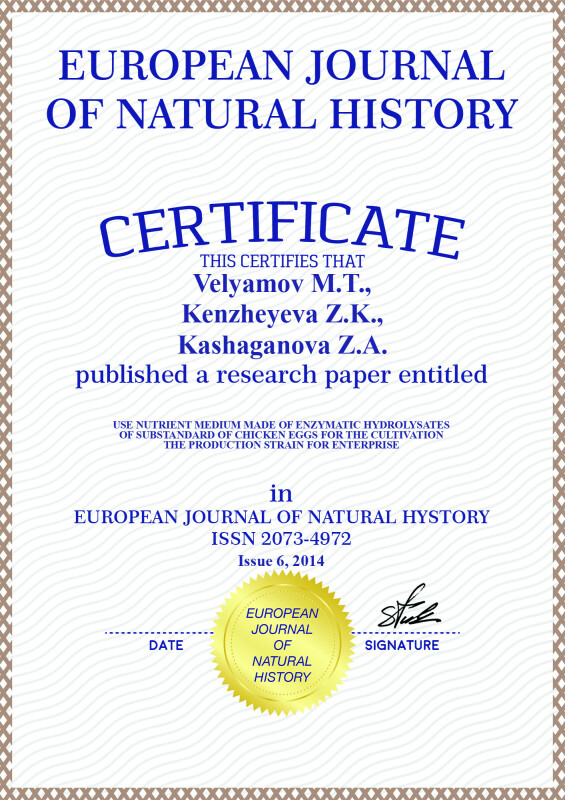 During the last decade volume of bird eggs production among all categories of Kazakhstan enterprises has increased almost two times from 1,3 billion units in 1997 to 3,8 billion units in 2013.

Leadership in output volume belongs to Almatinskaya region. Producers in this region, as well as those in Kostanayskaya, Eastern-Kazakhstan, North-Kazakhstan, and South-Kazakhstan regions produce about 66 % of total amount of all eggs, produced in Kazakhstan. According to forecasts of the Kazakhstan Union of poultrymen, by 2015 output of eggs should reach 4 billion units [1].

At the same time, according to statistic data, due to degradation of technological or other costs of production, up to 8–12 % of the produced eggs turn out of condition, of them 4–6 % are used in non-food production, and the remaining 3–6 %, due to their short-term storage period, are not fit for use even for forage purposes. Therefore, the indicated products are often utilized by poultry enterprises, and it is not economically-efficient. Plans, defined by the concept of developing poultry, also imply broadening assortment of poultry products through a deep processing and complete use of the output with minimization of waste and non-conditioned products, especially via utilization method. Besides, it is well-known that during bioproduction of prevention medications against virus diseases of human, animals, and birds (bird disease of Marek, La-Sot, etc.) up to 30 % of eggs are put out of selection, they are also used as low-quality product, and often up to 50 % of them are utilized.

Though eggs are rich in complete proteins, it would be incorrect to consider this product to be valuable only in human ratio. As apart from proteins, fats, and carbohydrates, eggs are rich in various mineral substances and vitamins in balanced correlations, they are a product that can satisfy different needs in nutrients and can be used in biotechnology, where implementation of protein-dense products is required. The foundation for it is the fact that nutritional value of eggs is quite high. According to a number of researchers, 100 g of chicken egg mass contain 6570 kJ [2]. At the same time, many of valuable egg nutrients are located in water solution and conditioned for consumption and digestion that of course bears certain significance and scientific interest of their use in diet and biotechnological developments, especially in the area of microbiology and cultivating cells in external environment, growing intracellular anti-genes (viruses, rickettsias,etc.) and creation of high-sensitive diagnostic, preventive, and treating preparations in medicine and veterinary [3]. Besides, during the process of processing, egg shell can be used in combined forage industry as mineral additions, especially in the sector of poultry and cattle production [3]. The described direction proves to be the most purposeful in terms of decrease in amount of non-compensated loss of unconditioned eggs, purposed for utilization and increase in economic efficiency of egg production on the whole, developing the sector of poultry and bioproduction in the republic.

In modern conditions development of cattle production, including veterinary and also animal’s biotechnology in Kazakhstan is impossible without diagnostics, prevention, and treatment various infective diseases of bacterial etiology. At the same time all projects in biotechnological science and practice are impossible to carry out without facilitation of complete, economically-profitable microbiological nutritional mediums.

The following environments are usually used for these purposes in Republic Kazakhstan: meat – peptone broth (MPB), meat – peptone agar (MPA) and nutritional mediums, prepared at their basis that are produced at foundation of high-quality cattle muscle hydrolyzates. Commercial value of 1 kg of imported dry environments MPB and MPA (production of Russia) equals over 35000 tenge. According to statistical data, annual demand for the indicated mediums for research and bioproduction purposes forms 90000–100000 litres in the republic.

At the same time, production of the defined nutritional mediums consumes a great amount of high-quality cattle meat that could be used for diet additions in the republic [4].

In Republic of Kazakhstan and countries of CIS nutritional mediums, based on egg hydrolyzates, received from non-conditioned eggs, are being developed for the first time. At the same time, the world practice, particularly USA, produces nutritional mediums at the basis of qualitative quail and chicken eggs, but the technology of their production is unknown [5, 6].

To carry out researches, we have prepared two series of fermented hydrolyzates of egg whites for nutritional medium of non-conditioned chicken eggs.

The sawing material was introduced to liquid nutritional broth of FHNCE in amount 0,1 %. Cultivation took place under an optimal growth temperature (37 ± 2 °С or different) for 24–28 hours, depending on growth characteristics of the tested microorganism cultures.

Parameters of microorganism growth kinetic were define according to the type of growth in liquid environments and calculated according to concentration of alive microbes, defined by the method of sawing standard serial solutions of bacterial suspensions into a dense dry nutritional medium (Table 1).

As the research results in table 1 show, nutritional mediums, prepared on basis of FHNCE 1 and 2 are the most biologically-complete for cultivating industrial cultures Вacillus subtilis ATCC 6633 and Lactobacillus acidophilus 4S1. Title of cells for these cultures reaches indexes 105–107 CFU/ml. Character of the tested cultures’ growth in liquid broths FHNCE and in agarized environment waw typical for this type of microorganisms.

After preliminary laboratory tests of the produced series of nutritional mediums of fermented hydrolizates of non-conditioned egg whites for testing microbiological indexes via growing bioindustrial strains, the received environments were transited to bioenterprise Scientific-industrial enterprise “Antigen”. The results of research are presented in Table 2.

Results of studying indexes of CFU for growing biotechnological strains of microorganisms, used in producing biopreparations in Scientific-industrial enterprise “Antigen” on nutritional mediums of fermented hydrolyzates of non-conditioned chicken eggs

The data, presented in Table 2, shows us that, according to microbiological indexes, defined via growing bioindustrial strains in scientific-industrial enterprise “Antigen”, the produced series of nutritional mediums of fermented hydrolyzates of whites from non-conditioned chicken eggs provide for accumulation of microorganisms as much as the control environment, received from MPB. Therefore, we can state that nutritional mediums of fermented hydrolyzates of non-conditioned chicken eggs are completely fit for bioproduction purposes, according to their microbiological indexes.

Thus, according to the studied physical-chemical indexes (pH, color, clarity, contents of total nitrogen, mass value of ammine nitrogen) and biological characteristics, defined via growing biotechnological strains of microorganisms in scientific-industrial enterprise “Antigen”, we can conclude that fermented hydrolyzates of non-conditioned chicken eggs can serve as a complete nutritional basis for nutritional mediums, designed to cultivate bioindustrial cultures of microorganisms.