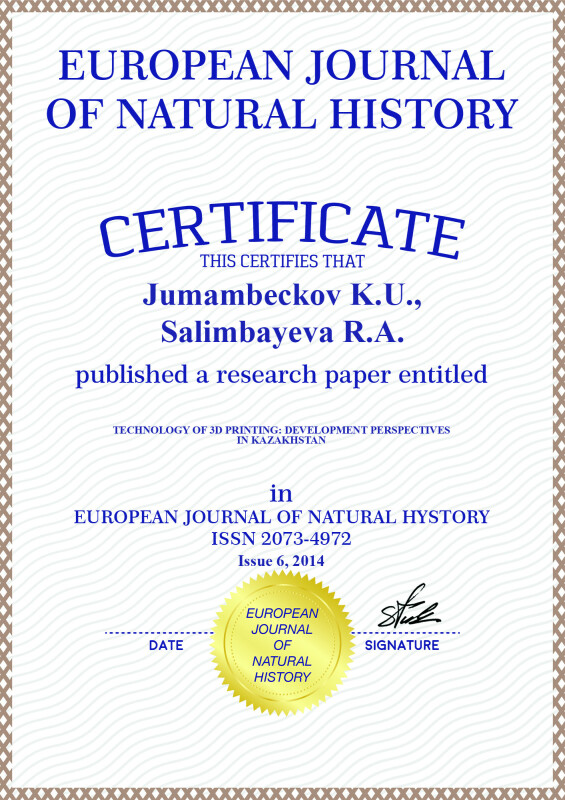 Article in PDF
213 KB
Everyone uses services of traditional typography: some need to correct an essay, others – to publish a book, create advertising banner, etc. But what if a usual print could be used to print, for example, a chocolate cake? It became possible due to emergence of 3D printing technology, and facilities, used to create three-dimensional objects are called 3D printers. Their abilities are truly unlimited: from creating hand tools and printing human skeleton to construction of full-scale houses with rooms and stair cases! Some experts predict a bright future for this technology, but others – only development within the limits of low-volume output. Let us study this miracle technology from within and see how it can benefit our state.

The very definition of 3D printer sounds as follows: it is a facility that uses method of layer-based creation of a physical object according to digital 3d model. In foreign literature this facilities of this type are also called fabbers, and the process of three-dimensional printing – rapid prototyping.

3D printing can be realized through different methods with implementation of different materials, but all of them are based upon the method of layered creation (growing) of a solid object. However, the widest spread was obtained by technology of fused deposition modeling, developed by S. Scott Crump, its popularity is defined by a relatively low cost of printers themselves and expendables. And the first printer of the described technology was produced in 1991. Since then the technology has been developing rapidly and became available for household usage, new operational systems support 3D printers.

During recent years interest towards them has been growing in geometrical progression, and not only among enthusiasts or narrow specialists: companies, involved into producing or projecting various products, use 3D printers actively, and governments of the most developed countries invest into creation of 3D printing development centers that are aimed to cut costs of producing technological goods, or plan to do it in nearest future. It is not all: as universities realize that the nearest future holds a demand for specialists in this area, education plans of training in basics of 3D-modeling and printing are being developed and introduced in educational institutions with state budget financing [5].

The Chinese government realized the potential of these facilities a while ago and stamps various configurations with attractive prices. One can shop different internet-sites for a compact domestic printer for an average of 1000 USD. If earlier only plastic was available for material, today the variety of materials can strike our mind. How do you like artificial blood vessels, printed in 2010. NASA is planning to send 3D printer to ISS in order to create the necessary tools right in the place of usage, Chinese companies test the technology of house construction. In only 24 hours a whole dwelling complex can be “printed” from quickly-congealing concrete, workers will only need to carry out internal finishing! At the same time, housed of this type are ecological and less material-consuming.

3D printer has a great significance in engineering. At the stage of modeling construction of a part or the whole construction can be altered. In engineering such approach can decrease costs of developing and producing new products dramatically.

Medical workers have learned to print “patches” for human skin. A special gel, made of donor cells, serves as a material for them. According to scientists, even the most regular office printer can produce leather if it is modernized for the purpose. In 2011 scientists managed to reproduce a lively human kidney. It took 3D printer (bioprinter) only 3 hours [6].

Last fall Canadian constructor invented Peachy Printer that costs only 100 USD and uses light-sensitive rubber (resin) that coagulates under the impact of laser, as material [7]. For example, printing a toy cube requires 20 minutes of its operation. Ans that is not it: this facility can serve as 3d scanner. Technically it can create a copy of any small object. Considering the low cost and availability of it, we can state that a wide spread lies before this invention.

Enthusiasts from all over the world have created an open project RepRap that allows printers to create their own components. At the moment the technology allow to reproduce 50 % of spare parts, however, it is not the limit, and the project will develop [8].

We can imagine the significance this technology has for educational purposes. Our Russian colleagues established mass production of 3D printers for school students and youth on the 5th of April 2014 at the plant “Voronezhselmash” [9]. Fantasy of students regarding possible shape and design of 3D printer turned out to be truly unlimited: models of wood, cardboard, metal, plasticine, “Lego” parts have been presented for the competition. We can name achievements for a long time, but let us concentrate on Kazakhstan realities and outline advantages and negative points as well as obstacles that lay on the way of progress.

Only several firms provide services of 3D printing in Kazakhstan, and only sells the equipment officially! Of course, nothing is said on this technology in government, and domestic mass media doesn’t pay mach attention to this topic. We can frequently hear businessmen saying that the republic’s legislation falls behind innovations and new ideas. Of course, all this can be said in regard to technical regulation. It is a common situation when investors have a prepared business plan, all necessary legal documents, equipment, and personnel, but there is no law to regulate such activity or the very structure of government has changed, and they have to collect all necessary documents again.

Mastering the technology would allow the state to realize new and undergoing programmes quickly and in high quality. For example, accelerate realization of programmes “Available dwelling-2020” and “100 schools, 100 hospitals”. Besides, in the latter case it would provide not only the working area, but also tools and donor organs.

In modern terms of global and vigorous competition, the defining condition of not “eating dust of the leaders” is for the state, its legislation, and population to be prepared for perception and introduction of new technologies. For example, the problem of author’s rights and firearms production can become urgent: on operating plastic pistol can be produced (ref. Defense Distributed), and the authorities will be unable to prevent it due to the specific situation. USA have already introduced a law that forbids production of firearms on 3D printers, obviously, we need to act the same. Everything is simple with the author’s rights. One should compromise with a producer of author’s product. In any different case we shall face a spontaneous production of copies and defective goods just like China did, and not only of firearms.

A heavy burden lays in solving this problem lays upon technical regulation. It is necessary to deal with new materials and substances and, therefore, safety and ecological friendliness of the created products become the most significant aspects. We should approach this problem gradually and carefully. The first step in this direction has already been made. International organizations of standardization such as ISO, ASTM, SME, and DIN work together to develop standards for technologies and materials, used in this sector [1]. This collaboration will allow us to accelerate development of the technology. Standard ISO/ASTM 52915:2013 “ Standard of technical requirements towards format of files of additive production. Version 1.1” describes the existing and future requests of production and technology of three-dimensional printing. As industrial file format for transiting information from a computer (designing applications) to a printing facility STL format is recommended to use. This format contains only information on an object surface, but doesn’t contain any data on color, size, or taste, etc. Organizations invite specialist in production industry and design from all over the world to discuss and comment the printing process. It is possible that the existing technical regulations will undergo changes, we shouldn’t outline emergence of additional paragraphs in old, or even issue of new standards on “rapid prototyping” (Rapid Prototyping Standards). All these measures will lead to creation of new research centers and testing laboratories. The quicker we master this sector in Kazakhstan, the quicker we shall outplay our neighbors and, possibly, will be also to provide consulting services to other countries.

For the first time in Kazakhstan, 3D Print Conference with participation of our domestic and foreign, mostly Russian subjects of jewelery, photo, engineering 3D industry, took place on the 16th of April 2014 in Almaty. Among speakers there was a professor from “Nazarbayev university” where the pedagogue gives a brief introduction course on 3D printing technology [4]. However, as we can see, it is not enough. Action is needed today. Trends of new technologies in the world define the inevitability of quick and energetic introduction of new subject and specialties into state eduction. For example, International IT university in Almaty should open a faculty of training in developing applications and construction sets in the sector of three-dimensional printing, moreover, the university has the experience of robot construction. It is reasonable to introduce new courses on technical regulation of the sector of rapid prorotyping and material study to specialties “Standardization, certification, and metrology” of Kazakhstan economic university of T. Ryskulov. And the process should continue among universities of juridical, customs, tax, and economic profile. According to example of Russian Federation, we should construct a plant of producing personal 3D printers for demonstrative and practical eduction of students. These measures will allow us to develop design thinking and creative approach among students and thus enrich patent portfolio of the republic. The most active and creative citizens should be rewarded with grants and medals. Kazakhstan can become the first country to rapidly develop technical and regulative base in this sector! No doubt, these measures will allow our graduates to be competitive at the international labour market. Such specialists will be able to create a demanded and innovative domestic product, thus accelerating introduction of Kazakhstan into the world’s thirty most developed countries.