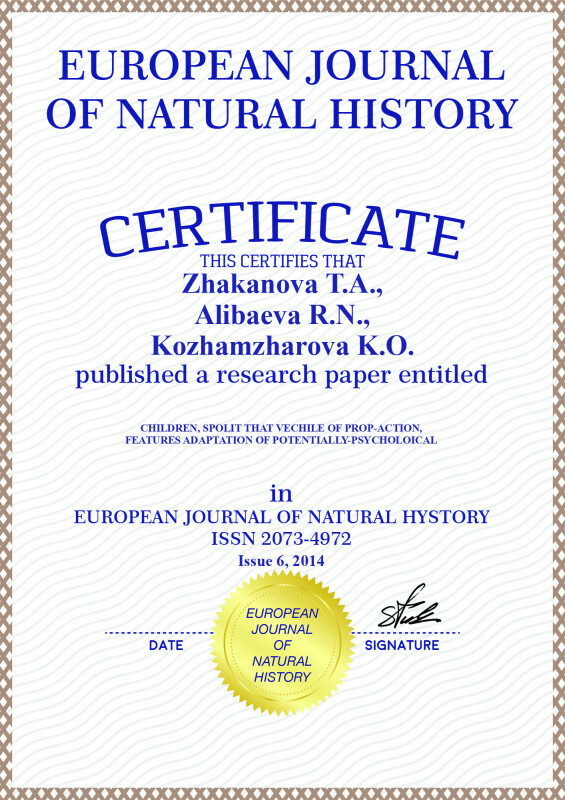 CHILDREN, SPOLIT THAT VECHILE OF PROP-ACTION, FEATURES ADAPTATION OF POTENTIALLY-PSYCHOLOICAL

On in our time pore in our the country conceivable limit increase number of children,storage is sensible, knowledge and to the question this industries social of defence to pay attention requires. Look my of societies “limit child conceivable a year considered” changing, became better turned on time one the member my societies to look them. Possibility children, that examined leader in limit children тап on time, cerebral in the state of paralysis is psychological and features development of phixiologicalon basis labours of B.P. Puzanov, E.S. Kalizhnyuk, V.V. Lebedenskyit was described [1].

One prop-action vehicle is spoilt children cerebral a paralysis – psychological develops motion according to very difficult category teaches and brings up motion vehicle wounds oneself direction in accordance gets organized. Prop-action vehicle is spoilt children intellectual and psychical development feature and physiological melody corresponding surrounds man talks relation very sensible and any weak to the changes observant. Such the children very impressionable, it is possible easily to offend them, lost it балалардакез-келген formed to the state unpleasant look. Viz., defect edge of motion unites social by relations coming, that your the viburnum influences general to development of psyche, is sober.

Especially is from life coevals of her early childhood life of children, spoilt that vehicle of Prop-action, beginning just right. Children motion defects, psychomotor and possibilities conversation doing presence of attempts, that was directed increasing remaining behind destroys defects associate parents, looks [2]. Possibility runs around limit these the children -different permanent to the patients specialists: orthopaedist, nevrapotolog, internist, speech therapist and etc specialists. Them in system kind medicinal therapy and, physiotherapy means for treatment, accept. Children accept frequent means for treatment it is constrained much in the state, time for a long time lies in hospitals. It tears caress of parents viburnum. That time, when parents came, at children them my the winter, agitation, that a conscience was conceived hundredth to the result of means for treatment associate, looks tracks of dissatisfaction. Сhildren patient cured leaves possibility parents complete viburnum health press pays attention, talks idea children talks affectionate two plan tremble. On sometimes, parents what do not ask for children that, comes, exact what they do, needed be, decides. Here, beginning from it time your the viburnum formed on time of personality spoilt. At first error in family influences children are formed in pathological the state education. If we are, will lean to the result research, to the children what said, edge meets solicitude 80 %. Wish of presence this Parents try to carry out, exchange act of this to it [3].

On sometimes, possibility comes in limit family of children – is strong factor, changes that look domestic the state. These the states bring psychological the state mother to change. Your conducts head well-known pores crisis of parents the state personality.

Emotional uniting uncontact: this of mother the state on a pore: unassisted, fear.Itpore difficult parents not on strained on a shoe tree to understand information, that was taken. To the State, there was that in that, considers guiltily, it test becomes stronger, dissatisfaction, that said, high. Acts and, brought that sense of guilt them to the patient of children, bring comfortable sorrow in sorrow error. That sense of capriciousness said to the children, edge brings in solicitude [4].

To deny, inverting is a pore: associate, that constancy in family and well-known level one the hope to keep, it is necessary to the circumstance, at that were functions of inverting. Associate That inverting smothers emotional, method, that was directed to lose worry, is. Viz. not to Acknowledge, in difficult phase denial viburnum of parents to check from to conduct refuses. It specifies reaction of defensive for parents. Looking they a doubt on competence of doctor, attributing to the specialists except for verification intends. On it pore “coping-behavior” develops: beginning from medical establishment, closes pass to different to the towitch-doctors. “Such magic equipped search” real the state to accept distorting, children come in the world strained on a shoe tree to adaptation parents an obstacle compels to come [5].

To Grieve, sense of that malice is, isolated to bring maybe.Children the state gets better not, your the viburnum brings “social to the middle not can to adapt” long phrustration to be on a share on psychical and physical approach for parents. It pore depression for parents to measure deeply characterizes[6].

Psychological basic criteria health to surrounding to the environment adapt, strained on a shoe tree level worry and adequate relation, that said, known. If so be, necessity limit children educator self social to the middle by adjustment of possibility by parents is conceived. For parents strained on a shoe tree to be psychological health, to the children them on connection, that said, carries out large role. Therefore viburnum, spoilt that vehicle of prop-action, conducted with parents educator psychological works it is necessary [8].

Stands psychologist in it the state in first ditch role. To the act of mother duty of Psychologist – to promote confidence, that said, it act can explain necessity to carry out. Though quite first pedagogical acts without result take place, to the psychologist necessary to render support to the mother in any the state. Offers methods of this work of psychologist with parents for her: to the parents to specify methods work with children; lessons, that was led by a psychologist, compendium; to carry out with children tasks of house; to read literatures, that was offered by a psychologist; creative idea, can carry out; to correct psychological health parents, to develop social adaptability, to promote confidence, leads training, that was dedicated to reduce level of worry, works [9].

Children brings up motion years feature takes into account sits, a decision accepts coulisse, – providing, labour, discipline culture, collective works takes as level drives in is necessary. Such the education of children needs understand mutually well and to look them right by a look to the future importance education superiority. Invalid, children, in family to bring up meets against two kind one – first my black. One the kind them fully provides detailed, material side children parents “limit”, viz., deeply measuring glancing but to the world fur coat of this spiritual to the necessity gives not [10]. Quite a viburnum punishes sometimes. Children in family of this go down on depression as an interior, to love of mothers, to love shooting – not deservingly talk think. Them heartfelt the state – a melody got down, mistrust a benefit. On development of language what will come from it, cognizableness activity on is formed, on education different defects were on a share, falling down, level of knowledge to stop.

Two viburnum one the state to solicitude coulisse, such the parents edge held too emptily “guilt at child” sense it, caresses. Statement of came Ramble tries to carry out. Children, that grew in such the middle, comes modest. The being unreliably, grows thinly. Are side of what social develop, such the children different to difficulties.

Possibility, limit child in nowadays time, to form takes very basic place Special development of pedagogic question influence. It question on to decide social localization of office workers special. Social teacher is an office worker of establishment what special(to correct) form, he all the representatives(teacher, psychologist, doctor, social office workers, right to protect office workers of organs, labour collective and parents) of institutes and personalities, at that and other declared oneself interest, on dense connection. Social basic aim act of teacher in special(to correct) establishments is below: to do positive the state development(body, socially, spiritually and development of reason) personality of children; on social adaptation children complex to give help; in vital space a viburnum protects; finishing graduating students are professionally directed I to the following to adaptation of life gives help from boarding-school [11].

Prop-action vehicle is spoilt children an educator parents head goes down not hurts diminishes aim a government 6 children one social office worker gives children and them parents for large help. These office workers district labour, scope and people comes from department social of defiance work. Filled up Therefore possibility your limit viburnum my society in line forming of to feel on time of member localization, takes that social office worker, is special.

Social possibility of office worker limit to the parents of children correctly to develop them and on aim education below suggestions give: getting it right feature of children, to accept; to the children economy patience love to show itself; to the children to worry inwardly unpleasant constantly shooting-right there were mothers, to try not to compel to notice; works associate to the way of life of house on possibility to carry out together with children; touch children are coevals on frequent connection done influence; children connection dowry constantly supports surrounding an environment flow to show itself, connection not tears to check; beret of help, with special by specialists to be on dense connection very important be, constantly taking into account to sit it is necessary to the children [12].

Prop-action vehicle is spoilt children teaches and basic duty row brings up children personality forms fully, the cognizableness attempt development, me societies even in a right member one time middle is added be.

Certainly, questions, that lead work found not, though on today’s a day limit child possibility, flow decision, sufficiently. Lines anticipating That is carried out works for experience exchanging exposure needed.

Saws social pedagogical tendency prop-action vehicle is spoilt children first moment a help gives for this is family, I lives sits middle investigate, discusses takes, me a viburnum lives social middle mixes, drives in, socialization question active compel to participate possibility give birth. This of the last name correctly uniting in only the state social tendency of pedagogics, able to resist different social to the obstacles, to form, cultural, industrious physical person maybe be. These the qualities to allow to touch to master limit psychology of children deeply, conversant for conceivable needed along children [13].

On socially to drive in, works of what special correct, defects on to bring up to win united for name that, to unite it is necessary and her as early begin on so social adaptations effective.

This is a level I aspiration values teacher’s, parents of reader and, connections between by companions to the state for restore very important [14].

That together, possibility limit stages child this values me aims strained on a shoe tree approach formed, the future me quick in the uptake, cultural, form and world view high is, motherland’s matched citizen is large оf course there is.

Future generation, there is that possibility of especially limit child, uncontact travelling did not get,correct development personality of they on approach to examine system extremely important.