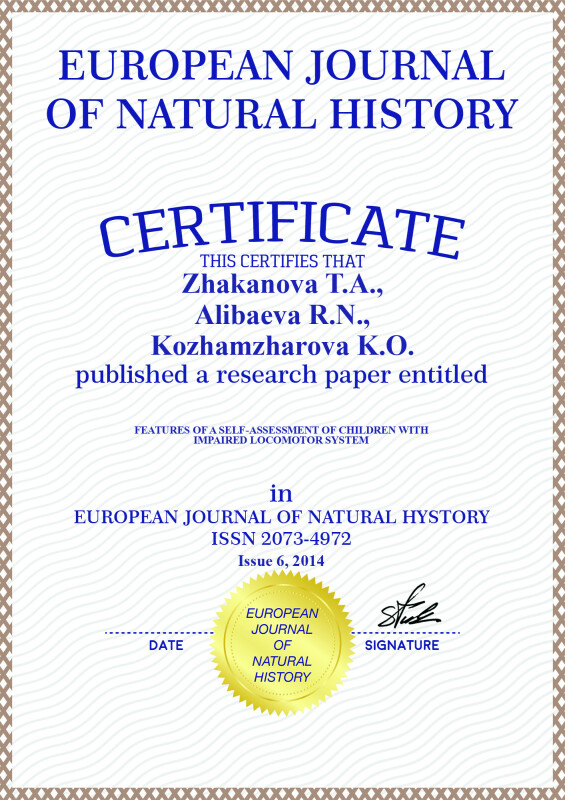 FEATURES OF A SELF-ASSESSMENT OF CHILDREN WITH IMPAIRED LOCOMOTOR SYSTEM

Article in PDF
177 KB
In this time of self-esteem of people with opportunities ogrannichennymi attracted attention of many researchers. The reason for this is the fact that these children are growing up in many cases can not fully live and work in society. Because children with disabilities have low self esteem and depend on the opinions of those around them. But very importantly, the children rated themselves sogranichennymi capabilities adequately and feel worthy member of society. This article discusses the formation and characteristics of self-esteem in children with disorders of the musculoskeletal system.

The concept «impaired locomotor system» includes the breakage of motion springing up from different reasons and spectacles. In case of visible illness and damage of impaired locomotor system of child’s early years parent’s all attention should oriented on developing and repairing of broken motion. The argument is because though some parents become aware of different of psychical and language features, they do not hasten to consult with special teachers, speech therapists, psychologists. Other considers that child’s psychical and language development will advance in the process of movement and recovery. As third ones believe that any disease would change child’s psyche and behavior. It tells us that most of them do not know about special (recovery) study and fostering systems for children with impaired locomotor system. Relying on psychological-pedagogical and speech therapy work for children with pathology in several decades there has been planned primary direction and way of theory which is being used broadly. Russian scientists L.A. Danilova, M.V. Ippolitova, E.M. Mastiykova, E.F. Arhipova, so do others support the idea of special study and fostering of children with cerebral palsy from the first month of life. Through principal aims, they proved the productivity of work taking care from early childhood, and pre-school age [1].

In our country, the increasing amount of children with mental defects, made health, education and social protection branches to pay their attention. Nowadays the social view have changed towards children with mental defects, they are considered as members of society. The life is hard to make decision without self-esteem. Self-esteem is self evaluation of level of qualities he obtains. It turns to the aspect of self-estimation. Self-esteem is the result of discussion, comparing, thinking and assorting.

It is unconditional that teachers evaluation affects of developing self-esteem in children with impaired locomotor system. It brings children to the division of excellent, bad and regular students. In the first stage of getting education progress work identifies child’s social status. A mark and B mark students’ self-esteem is considerably high in comparison with bad mark students’ who have doubts about their abilities [2].

Elementary school is the first stage for school life. Taking these steps a child opens up inner learner position. Study takes the main place for him. In this stage child develop theoretical thinking and acquire new skills. The progress at school takes a part in developing personality, children with cerebral palsy disease beyond their age have unstable up and down intellectual, bold and happiness emotional scale. It distracts in developing child’s personality [3].

Cerebral palsy children from boarding school have difficulties in behavior and incompetency in adjusting to sociality. But in spite of high level of self trouble, their self-esteem will become adequate as they get older, because of psychological-pedagogical work made to the children with cerebral palsy disease.

There have not been noticed any self-esteem difference and anxiety between children having cerebral palsy disease with the form of spastic diplegia and normal children [4].

Children with impaired locomotor system are incompetent to evaluate their attitude. The evaluation process and teachers good rapport with children are not the only reason for the development of self-esteem in elementary school children with impaired locomotor system. In general family upbringing also plays the fundamental role in extending self-esteem.

The birth of mentally retarded children takes family to the psychological change. Family of children with impaired locomotor system from the beginning have hard times. When child’s action does not live up to parent’s expectations, it is reason for fading solicitude toward the child. The child comparing his defects with other regular children ends up with deterioration of his self-esteem, question like «why I was born this way» would concern him [5].

Holding interest to the teenagers eager to present good skills can upper his self-esteem. Teenagers with low self-esteem can have psychological troubles, difficulties in communicating with fellows and, low report card.

Such indicators vanish any believe to get high education, build a rapport with fellows and to take a good rank in society. If a learner does not acquire reading principles in time he will not be able to continue his study. That’s why it is important to support learner’s ambition to study and do not let to lose his authority among others. The guideline is to pay attention on distinctive features of self-esteem among teenage learners [7].

The adolescent is the one of the complicated period in mankind’s life. Expect reforming psychological concept again, it will have been obtained new skills, viewpoint, so does the increase of general guide to inner sociological acclimatization. The period of adolescent feasibly would meet by low studying progress, degrading ability to work causing anxiety, imprudent behavior what turn to stage of division of “I” and “world”.

For the children with impaired locomotor system on formation of self-esteem the appearance plays the main role. The more opportunity we provide the more concentration they extent. The teenager’s ego would appear in early years. In this period they begin to observe their inner world. The period adolescence come up with self-consciousness and strive to be independent. After wards they proceed to self-determination what will make them competent to organize their life plan [8].

In adolescence cycle there will appear new concept with developed self-esteem divided by what I think and what others think. children with impaired locomotor system in elementary school do not have low self-esteem as they lack to notice their physical defects. The appearance does not play an important role for them. The school, other children and parents warmth are enough for them [9].

Though in teenage period they get older and start to notice own physical defects by comparing with others. Appearance, physical feature and clothes would play vital role now.

Paying attention to the demands having been said earlier would ensure us in growth of psychological, physical health stability.