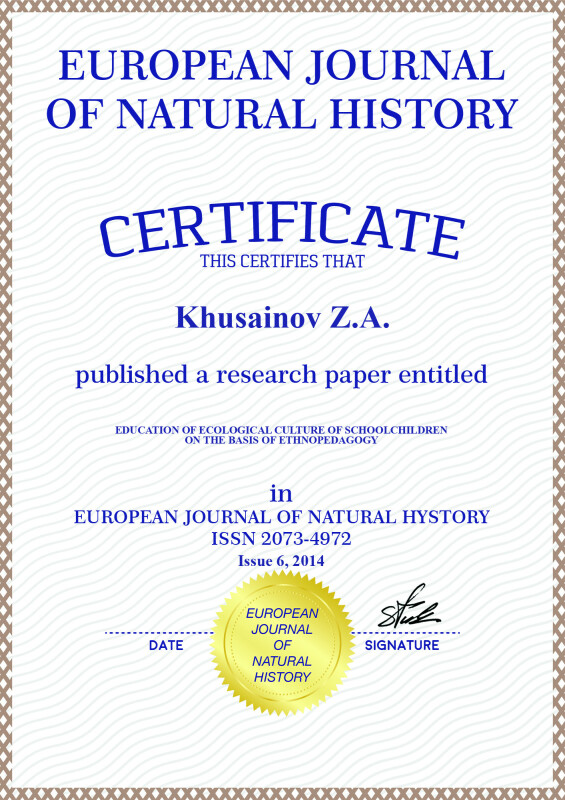 EDUCATION OF ECOLOGICAL CULTURE OF SCHOOLCHILDREN ON THE BASIS OF ETHNOPEDAGOGY

Article in PDF
363 KB
Facilities of folk pedagogics, traditions, ceremonies and customs of people, stable norms and rules of behaviour of children set the ecological maintenance in the wild, assist education for them ecological culture; education of ecological culture of schoolchildren on the basis of ethno pedagogy has an ecological, scientifically-pedagogical, historical, socio-political value.

An ecological problem has global character. Efforts of one separately taken country or group of countries are insufficient for successful maintenance of natural environment of our planet. International cooperation is here needed and simultaneously the use of regional knowledge of people.

In our days in pedagogical literature there are two near on sense terms: “ethno pedagogy” and “folk pedagogies” In our opinion, folk pedagogies is educator traditions of concrete ethnic group, and ethno pedagogy is the generalized concept meaning the comparative analysis of educator traditions of different people. People are an only and inexhaustible source of spiritual values. He produced original moral since times of immemorial mode of spiritual culture [8].

At the same time, in spite of the permanent interest of researchers further in the problems of ethno pedagogy and ethno-ecological, ethno-cultural processes in Russia, including its regions, are studied not enough.

An aim of our research is education of ecological culture of schoolchildren in the educational-training process of schools on the basis of èthno pedagogy.

Research methods are a theoretical, pedagogical and ecological analysis of different aspects of the investigated problem; theoretical and practical generalization of research results taking into account basic factors and concrete terms.

It turned out in the process of our research, that in case that children reach after nature on the basis for ethno pedagogy and ethnologist, study its variety, then it destroys them on the special relationships and co-operations with a naturally-social environment. In a traditional culture a person is in the conditions of close intercommunication with nature. A student behaves to nature as to the “source of life, condition of development, cognition and poetry”. Nature is presented in consciousness of man as “something unchanging living, playback and granting – as a source of life” [9].

The problem of ecology stops to be the problem of separate cities, countries and becomes global. On this basis, in their researches students lean against works of home and foreign scientists: S.D. Derâbo, V. Âsvina, G. Heflinga, A. Humidification, P. Gantry, F. Sent-Marc and others.

For realization of the advanced study with students a number of certain and neat teachers-experimenters were chosen from Tatar, Chuvash, Russian and other in schools and gymnasia of Kazan and Republic of Tatarstan. The aim of experiment was verification of efficiency of the worked out programs, their informatively-didactic bases of realization in forming of ecological culture of schoolchildren at national and general school.

At development of the methodical providing of experimental researches we tried to take into account the features of the multilevel system of general and national schools in Republic of Tatarstan. All national educational establishments were given the task to provide the students with durable ecological knowledge and to form for them an ecological culture on the basis of experience, knowledge, customs, ceremonies, holidays, traditions of the Tatar people and other ethnos of the region. On the basis of the conception of education of ecological culture of schoolchildren we worked out the following basic criteria:

2. Morally-aesthetic and action-practical attitude of student toward objects and phenomena of nature;

3. Objective and subjective attitudes of student toward etno pedagogycal knowledge, traditions, ceremonies, customs, holidays; to the objects and phenomena of nature and their integrative connections between them.

Teachers-experimenters, on the stage of establishing experiment, conducted group experimental verifications, measured initial, intermediate, eventual results. Authenticity of distinctions in the indexes of reasons and barriers in the conditions of innovative and traditional activity is set on t – to the criterion of the Student’s

namely that t – a criterion is expressed as a relation to the difference selective middle to the error:

for not equally numeral selections

The count of index of meaningfulness we will show on an example (first line of Table 2).

During experimental work teachers-experimenters divided schoolchildren into two groups: experimental and control ones for 10 persons. During the first experiment, they found out the following results in an experimental group:

Further, an experiment recurred 9 times. The results of all experiments are reflected in a summarizing Table 1:

According to the results of the research there was produced a statistical row of probability distribution:

found the mean value of index:

We designated. Because then the result was written down in a kind (Table 2, line 1). Other middle indexes were produced (see a Table 2).

Experimental work consisted of ascertaining and formative experiments with 725 students. The programme contains target, methodological, substantive and procedural components. For scientific and methodical support of experimental work there were held seminars with teachers-experimenters.

In the course of ascertaining the experiment the most important indicators of ecological culture of students were revealed, carrying out and implementation of the teaching system of experiment with the epidemiological patterns and rules for their implementation in accordance with the criteria. Quantitative and qualitative evaluation of experimental work was carried out on the basis of the wide use of mathematical apparatus. Analysis of the quality of learning in each section was held to determine the level of possible retention, by G.F. Lakina [3].

The results of the pilot test are shown in Table 2.

Results of the 6–9 classes in science subjects showed that the level of ecological culture of schoolchildren in innovative and traditional groups before the experiment was generally low. As a result, on a conceptual basis, there were significant changes at all levels, but in the innovation group they were more significant.

The results prove the efficiency and accuracy of our conceptual framework and give grounds to recommend them for introduction into the mass of schools, gymnasiums and high schools not only in our region but throughout Russia.

We have received positive results, confirmation of this is the Table 3.

Thus, the goal of the study is achieved. During the experimental work based on a conceptual framework sufficient teachers developed copyright innovative technologies formating ecological culture of pupils on the basis of non-traditional psycho-pedagogical conditions (environmental simulation games, ecological and psychological training, environmental workshops, etc.). Creative interpretation and use of educational technologies have greatly expanded arsenal of pilot programs.

Thus, those teacher-experimenters who use textbooks and programs website works more productively managed to solve the problem of ecological education and formation of ecological culture of schoolchildren in the region [10].

During the experimental work in the classroom and extracurricular activities there were widely used ecological knowledge of the Tatar people and other peoples of the region: the songs, paintings, works of art, historical materials, proverbs, riddles, tales, legends, fun, Baits, etc. Munajat, reflecting the nature of his native land, the relationship between man and nature; traditions, customs, rituals and Tatar ethnic groups living together in the edge associated with the nature of ennoblement. Children under the guidance of teachers trained in the critical analysis of the processes taking place in nature and environmental change in it.. With years of experience and living together Tatar peoples of the region, the students learned to perceive the world and nature from the perspective of ecology. All this allowed the students to establish a close relationship with the natural sciences ecological knowledge of the Tatar people and people in the community territory. Under the guidance of teachers students gradually learned the nature, consistently revealed a long chain of relationships of natural components. Complemented by bright ethno pedagogical, ethno ecological knowledge and peoples knowledge about the nature of students gained humane.

Given the negative things in the environmental behaviour of children, teachers have made adjustments to the newly planned observation tours, hiking and nature trails. Varied forms and methods of work, picking up more emotional means to influence their psyche: movies, computer programs, reflecting the landscapes of his native land, Tatar, Russian, Bashkir, Chuvash, Mordovia, Udmurt, Mari and other songs with touching words that convey mood, thought and aspirations of the people, etc.

Education of ecological culture among the students revealed in the works of I. Zvereva, I.T. Suraveginoy, A.G. Asmolova, V.S. Transfiguration and other authors of the study: N.S. Blyagoz, A.M. Galeev, M.L. Trigger, G.A. Ivanov, T.V. Kucher, V.M. Minayeva, L.P. Saleeva and others approached the problem from different angles. However, none of them was able to fully disclose the nature and versatile formation of ecological culture based ethno pedagogics students. The authors confined themselves to the actualization of the problem and did not undertake the task of substantiation and disclosure. Deeper and wider the problem was disclosed by B.T. Lihachev. However, he did not give a precise definition of ecological culture based ethno pedagogics students.

Analysis of scientific work and experimental verification of the efficiency of use in the practice of environmental education of students on the basis of culture ethno pedagogics shows that there is no analogy to this study.

In carrying out the experimental work environment education and psychology acted as psychological and pedagogical foundations in implementing the conceptual basis for the formation of ecological culture of schoolchildren. When formation of ecological culture means subjective attitude to nature – it’s subjective attitude reflected in their needs, student interacts with objects and phenomena of nature, is a factor leading to behaviors. Based on the criteria, subjective attitude towards nature promotes the formation of ecological culture student, describes the basic parameters: the breadth, intensity, awareness, modality, and the parameters of the second-order emotions, generality, dominance, integrity and conscientiousness. They provide a system of values that foster students’ qualities such as social activity, the ability to interpret environmental events surrounding natural and social environment, to make independent decisions ennobling environmental and social protection.

The developed system implementing environmental education of students on the basis of culture ethno pedagogics passed a multi-year research and experimental verification. Subject of study had a complex structure and content; experimental work was carried out in a comprehensive, incremental way. Specificity studies of ecological culture foundations of education of pupils in national and secondary school is their organization in vivo experiments in a real educational process flowing.

Education of ecological culture of children in the experimental work was provided by the introduction of content and ethno regional, ethno ecological material, ethno pedagogical, ethno ecological knowledge. On the lessons there were widely used environmental experience, knowledge, rituals, customs, holidays, traditions and Tatar ethnic groups living together in their native land.

On the basis of research results state that modern pedagogy increasingly removed from the principle nature useful. Only the greening of all subjects on the basis of ethno pedagogics in all educational institutions, schools and institutions of higher education will be a methodological framework for dealing with the issue, and radical renewal of Ecological Culture [11].

In the formation of ecological culture of pupils on the basis of clearly visible ethno pedagogics two lines of ecological relations – man and nature, physiological and psychological ties have an effect on physical and mental health. Their gap entails a disruption of normal biorhythms interaction of physiological and psychological processes, destruction of a single person’s aura and nature. Only their revival restores single naturalistic aura, brings inspiration to psyche and physiological systems. Spiritual, moral and aesthetic communication affect the state of mind. Appropriateness, proportionality, harmony and beauty are a source of human moral and aesthetic satisfaction and purification. Both of these communication lines serve as a physical and spiritual, moral and aesthetic improvement, formation of ecological culture of personality.

Thus, pedagogy contributes to the solution of the problem in practice, use of environmental education and training of young generation, developed by different peoples for centuries. Our research in the field of education of ecological culture of the younger generation advocates the new content of the public culture of the XXI century.