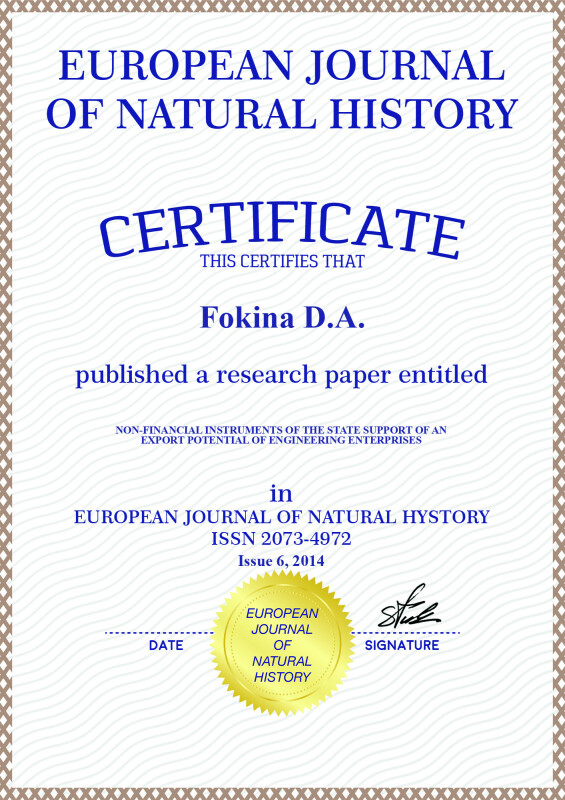 Non-financial instruments of the state support to develop the export potential of enterprises – are tools that have an impact on the development of enterprises – exporters not directly, but indirectly, through what any other instruments. State should pay particular attention to the tools of non-financial support from the fact that these tools are not contrary to accepted into the WTO ways to support exporters.

JSC “Krasnoyarsk Regional Agency for Small and Medium Business Support” conducts the activity since May, 2009.

The main activities of the Agency are:

● providing guarantees for credit receivers in credit institutions according to the Guarantee program;

● consultation on questions about business methods;

● trainings for businessmen within a course of financial literacy «Begin and improve the business».

For non-financial instruments to support the export potential of machine-building enterprises include activities under the various programs at the regional level.

For example, in the Krasnoyarsk region has a program “road map” Support access to foreign markets and “export promotion”.

Russian Federation, in accordance with the classification of the United Nations, included in the list of countries in transition (transitive) model of the economy, so the Russian exporters may qualify for more favorable treatment to import their products, rather than RNB.

Preferential treatment of imports of goods provided by developed countries on a unilateral non-reciprocal order of the Russian Federation and is not contrary to WTO rules and disciplines.

There are Government programs to create and develop economic cooperation, developed with the participation of the intergovernmental commission on trade and economic cooperation with foreign countries. As part of the Commission to establish committees and working groups, which play an important role in the development of bilateral cooperation between Russia and foreign countries, aimed at obtaining mutual interest. Intergovernmental committees are established for effective interaction between business and the state at the international level. The main goal of each program – the creation of favorable conditions for the development of foreign economic relations of the Russian Federation, assistance to Russian entrepreneurs in collaboration with foreign partners.

In the Eurasian Union in the framework of this area signed the decision of the Supreme Eurasian Economic Council “On the main directions of coordination of national industrial policy”. This decision is the legal basis for the formation of industrial cooperation in key areas.

Non-financial instruments of government regulation relate to the environment, provision does not depend on the opinions of business leaders. However, using this tool does not contradict the block with WTO rules, and hence can be used by enterprises without any restrictions. As a rule, non-financial instruments of state support are advisory in nature, the company cannot use them at all.

The work is submitted to the International Scientific Conference «Modern problems of science and education», Russia (Moscow), February, 10–12, 2015, came to the editorial office оn 15.01.2015.