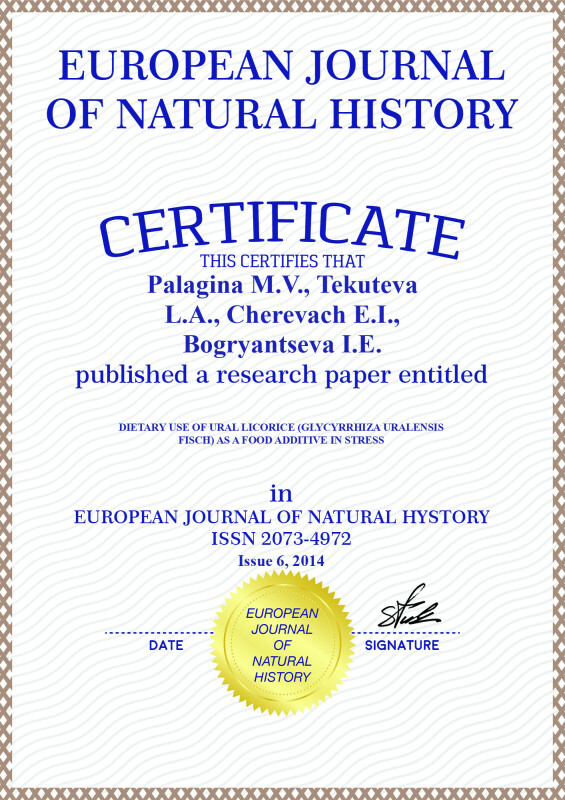 Article in PDF
183 KB
The article represents the results of application of the diet containing the Ural licorice root extract in the correction of pathologies of the rats’ lung surfactant after their exposure to noise effect. Present study enables us to recommend use of the Ural licorice extract as a food additive for correction of pulmonary status in the conditions of exposure to noise stress.

Ural licorice (licorice root, Glycyrrhiza uralensis Fisch.) and licorice-based products have been traditionally used for the treatment of acute and chronic respiratory diseases, such as bronchitis, catarrh, inflammatory pulmonary diseases of different etiology, bronchial asthma etc. Biological activity of extracts produced of licorice root (Radix Glycyrrhizae) and their physiological safety are accounted for by their chemical composition with main components including: glycyrrhizic acid which is structurally close to glucocorticoids; flavonoids – liquiriton, liquiritigenin, isouraloside and others; carbohydrates, organic acids, vitamins, amarines and other compounds [1]. The principal therapeutic effect is most likely to be due to corticosteroid-like effect of glycyrrhetinic acid which is released in the course of hydrolysis of glycyrrhizic acid. This is the most important pharmacologic property of the plant. Activity of glycyrrhizic acid is similar to 1/8 of that of cortizone. Another significant pharmacological effect is antioxidant action which is provided by flavonoids.

In spite of considerable number of research works dealing with study of licorice up to present time, we did not find any work on the use of licorice or licorice-based products as stress protectors, components of functional food products or food additives.

Today, the action on the organism by various stresses, including emotional ones, is a current and widely discussed problem. One of the principal places within the framework of this problem belongs to the pulmonary pathology initiated by a stress factor. The lungs react to the stress with structural and functional changes at the cellular level. As a rule, pulmonary pathogenesis is connected with impaired functioning of the macrostructure which is essential for operation of the organ – lung surfactant which is the membrane lining the internal surface of air vesicles. Lung surfactant (LS) is mainly composed of lipids and thus prone to lipid peroxidation (LPO) activated by effect of environmental stress factors [2]. The process of lung surfactant injury can be reduced by dietary use of functional food products and specific biologically active additives on the basis of phytopreparations with stress-protective activity able to reduce LPO and to stabilize lipid status [6].

The aim of this work was to study experimentally the effect produced by noise stress on pulmonary surfactant system and correction of its pathologies by extract of Ural licorice introduced in food ration.

In order to determine the degree of lung injury in experimental animals as a result of psychoemotional stress we conducted studies on three groups of white rats (Wistar line) with weight 170 ± 20 g. The rats were subjected to acoustic discomfort by noise with intensity 80 dBA at the distance of 5,5 m from the source during 1 hour one time and during 9 days (control group). Experimental groups (the 1st and the 2nd group) consisted of rats which were intragastrically administered the Ural licorice extract in the dose of 0,1 g/kg of body weight 30 minutes before the noise exposure. Besides, during seven days before the beginning of the experiment the rats of the second experimental group daily received the same dose of licorice root extract with their food ration. The intact group consisted of healthy animals of the relevant age and sex who received the standard food ration.

The extract used was extract of Ural licorice roots (Glycyrrhiza Uralensis Fisch) prepared by percolation 1:1 with 40 % water-alcohol solution in accordance with requirements of The USSR State Pharmacopoeia (1968).

Chemical and technological parameters and content of macro- and micronutrients were determined for the extract. The results of studies are shown in Tables 1 and 2.

The rats’ LS was separated and examined using techniques described in the earlier works [4]. Among parameters to be determined were LPO secondary products reacting with 2 – thiobarbituric acid (TBA-active products), activity of antioxidant system enzymes – superoxide dismutase and glutathione reductase, total lipid amount in terms of raw lung mass and phospholipids in percentage from total lipids, classes of phospholipids and neutral lipids.

The amount of peroxidation products (TBA-active products) in rats’ lung surfactants 9 days after the noise exposure increased significantly, and the activity of antioxidant protection reduced: the amount of LPO products increased by 1,2 (р < 0,05) times, the activity of superoxide dismutase and glutathione reductase reduced by 1,9–1,6 (р < 0,01) times. Intensification of lipid peroxidation with simultaneous inhibition of antioxidant system resulted in disturbance of lipid metabolism which was manifested in decrease of total lipid level, including phospholipids, by 19 % (р < 0,05). In terms of phospholipidic composition the share of phospholipid precursors increased (phosphatidic acid by twofold and phosphatidylglycerol) by 1,7 times (р < 0,05), and the share of oxidized phospholipids (lysophospholipids) increased multiply (р < 0,001). In terms of neutral lipid composition, the share of free fatty acids and triglycerides decreased by 11 and 18 %, respectively, and the share of cholesterol and cholesterol esters increased by 12 and 19 %, respectively (р < 0,05) (Table 4). Therefore, it should be noted that the general impact of noise on the rats’ body resulted in severe disturbance of the state of their lung surfactants.

Levels of lipids (phospholipids and neutral lipids by classes) of lung surfactant in intact rats, control rats and rats fed with licorice extract (9 days after exposure to noise stress)

Application of the Ural licorice extract prior to noise exposure maintained the level of the examined LPO parameters, enzymes’ activity and lipid values at the level of intact animals. Only the value of lysophospholipids exceeded the level of the intact animals. However, the total lipids level even increased by 11 % as compared to the correspondent value in the intact rats. The application of the Ural licorice extract proved to be efficient as a LPO inhibitor and for maintenance of antioxidant enzymes activity at the level of healthy animals.

Protective effect of licorice extract in relation to lung lipids is most likely to be due to corticosteroid-like impact of glycyrrhetinic acid which intensifies secretion of cortisone and prevents its degradation in the liver. The synthesis of lung surfactant lipids is known to intensify under the influence of glucocorticoids by increasing blood concentration of fatty acids and glucose which are the necessary substrates for the synthesis of phospholipids.[5]. Another important stage of restorative processes in the lung surfactant induced by licorice extract is the inhibition of lipid peroxidation reaction by flavonoids forming a part of the extract [3]. This is the reason why the development of adaptation mechanisms aimed at the maintenance of homeostasis of the lung surfactant lipid component in the animals consuming licorice also takes place under the activation of the antioxidant system.

Thus, the results of the investigations showed the efficiency of the Ural licorice extract application for correcting the damaged lung lipids. This given investigation enables us to recommend the application of the Ural licorice extract as a food additive for correcting the lung condition when the body is exposed to the noise stress.