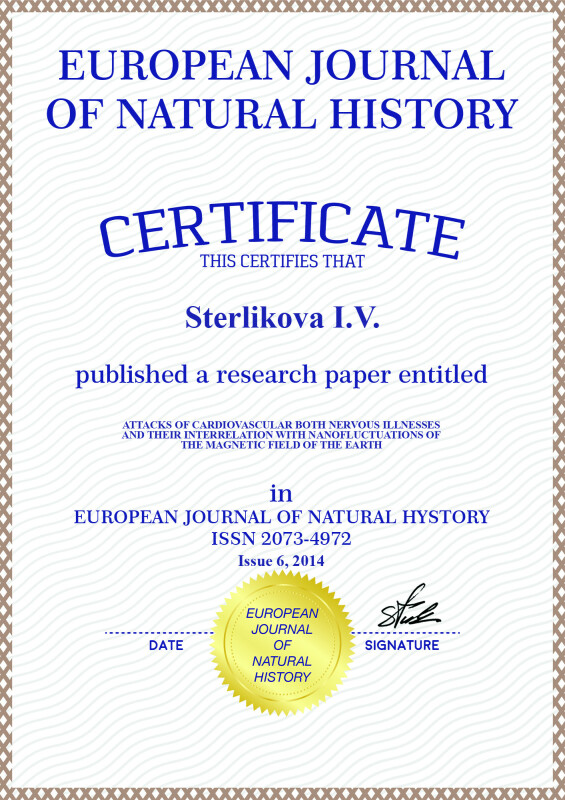 The magnetic field of the Earth can be divided conditionally on two parts: constant and variable as they have a various origin. Sources of a constant component of a magnetic field are located in a planet. Sources of a variable component of a magnetic field have an extraterrestrial origin. The variation field is imposed on constant, causing change in time as a whole all magnetic field of the Earth. The geometrical difference between observable size of a magnetic field and its average value for any long time interval (month, year) is called as a vector of magnetic variations of fields. The size of change of a variable component of a field in comparison with a constant component is insignificant. Magnetic variations share on fast and slow (century). Among fast variations distinguish quiet and revolted (geomagnetic pulsations). Geomagnetic pulsations by the physical nature are MGD – waves in magnetospheric plasma which are transformed in electromagnetic waves at the approach to the Earth. Amplitude of geomagnetic fluctuations it is insignificant it is small: from units to hundreds nanotesla (10–9 Тл). The range of frequencies of separate types of geomagnetic pulsations is close to the basic biorhythms of the person. Pulsations of a magnetic field of the Earth can be imposed on biorhythms and depending on an imposing phase to render both positive, and negative influences. Now the problem of studying of geospheric and biospheric communications has got still the big importance in connection with piloted flight planned for the nearest decade to Mars, accompanied by an exit for limits magnetosphere of the Earth. In work are presented experimentally and statistical results. The inhabitants of Murom, Vladimir region are chosen as the subject and the object of research. The object of research on the site concerns average geomagnetic widths of an order of 53 degrees. Geomagnetic conditions in this region are fixed by a geomagnetic observatory of Borok in Yaroslavl region. The time interval of supervision – three years (from February, 1985 till December, 1987) – coincides with lifting of solar activity in its 11-year-old cycle. The ends of the time interval adjoin on the one hand, to a minimum of Sun activity (1984), on the other hand – to its maximum, and, to the highest on the intensity for the last almost two centuries (1989) . An initial material for research are medical given stations “First aids” in Murom and the geophysical date of the observatories of Borok. Magnetic storms recurrent and flight characters are considered. Feature of a technique of processing consists that the medical data is selected according to each case of a magnetic storm. It is rather important if to consider that circumstance that handwriting of each magnetic storm is individual and unique. The medical data was analyzed in three time intervals: before a magnetic storm, during a magnetic storm and after a magnetic storm. Thin structure of magnetic storms (nanostructure) are geomagnetic pulsations. Among variety of geomagnetic pulsations those which periods are close to the basic biorhythms of the person have been chosen. Frequency of fluctuations of a cardiac muscle of an order of 1 Hz, frequency of pressure fluctuations 0,1 Hz, brain biorhythms have frequencies from 0,2 Hz to 100 Hz. In consideration joined the irregular fluctuations of low-frequency and high-frequency ranges accompanying all three phases of course of a magnetic substorm, and also regular fluctuations of type Pc1. The magnetic storm in February, 1985 had recurrent character, chromospheric flashes on the Sun was not observed. Emission of plasma of a solar wind occurred from of crown holes. Flight magnetic storms are considered in a counterbalance to a recurrent storm. One of them is registered in the same month not to break seasonal prevalence of the phenomenon, but in 1986. Others are registered in the spring and autumn of 1985 (April-May, November-December). Besides, the long time intervals corresponding to moderate and low geomagnetic activity at which magnetic storms it was not observed (spring of 1986 and winter of 1987) are considered. The analysis of the medical information is executed in each of versions of following cardiovascular illnesses: a chronic ischemic heart trouble, hypertensive illness, a hypertensive crisis, a stenocardia, a heart attack of a myocardium and in each of following nervous illnesses: the vascular dystonia, a bronchial asthma, a neurasthenia, a neurosis, a psychosis, a schizophrenia, a brain stroke. The greatest number of calls of first aid concerning attacks of cardiovascular and nervous illnesses and their lethal outcomes was necessary for the moments of time of a long absence of high-frequency geomagnetic pulsations in a frequency range of biorhythms of the person. As scale of duration of absence of pulsations the six-hour interval necessary for reorganisation of the plasmasphere (namely its borders – plasmapause) which can act in a role of one of natural amplifiers of high-frequency fluctuations is considered. As the recommendation for maintenance of normal conditions of ability to live of crew of the spaceship at an exit from an operative range of a geomagnetic field it is possible to offer artificial influence by variable electromagnetic fields in a range of frequencies close to biorhythms of the person.

The work is submitted to the International Scientific Conference «Modern Problems of Experimental and Clinical Medicine», Bangkok-Pattaya (Thailand), December, 20–30, 2014 came to the editorial office оn 04.12.2014.