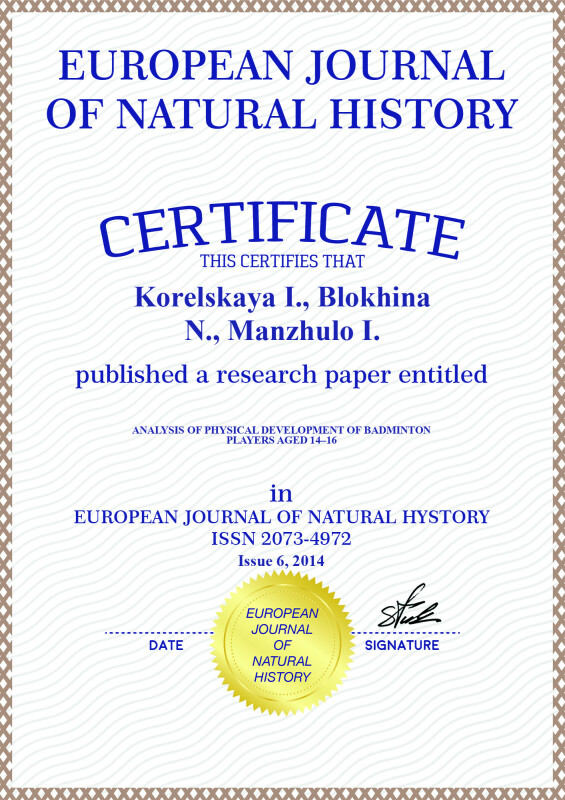 The article studies the young athletes involved in sports badminton. All athletes live in the same region of Arkhangelsk. Complex research of young badminton players aged 14–16 years was conducted in respect of those who train at the sports school. In the course of are defined anthropometric indices of body weight and body length of young athletes. The parameters of the physical qualities of young athletes. Are shown correlation relations indicators of physical qualities, which reflect the influence of one on the other.

The problem of the player selection in professional badminton is very complex. It involves many aspects, among others pedagogical, social, psychological and philosophical phases [1]. The coach’s experience and intuition can help to make a choice, but they cannot solve all selection problems, that is proved by the great number of player removing that can reach 90–95 % [4, 5].

The indicators used for orientation and selection should have predictive power. That means they should not only fix the current development of the athlete, but also give an opportunity to predict how these parameters may change in the future. They may serve as a signal of the relative level of the athlete development, when this person becomes an adult. The selection of athletes is a complex matter, since it is necessary to predict the next few years of development not of adults, but of growing-up children and adolescents. It is necessary to guess a child’s athletic abilities, which have not yet appeared, but can be crucial in an adult athlete [2, 3, 6].

The task of the coach is a selection of children, suitable for playing badminton and able to achieve high results. Identifying children, which are most susceptible to badminton, is possible by making a special testing appropriate to badminton. Test results can help the coach to select the most talented children, and what is also important is to create a program of improving underdeveloped qualities.

Therefore, the question of selection of young athletes in badminton is topical.

The purpose of this research is to identify and evaluate the indicators of athletes’ qualification, which are the priority in the selection of young badminton sportsmen.

The follow tasks were set to achieve these goals:

Traditional research methods such as analysis of the scientific and methodological literature, assessment of physical development, testing and mathematical statistics were used for solving these problems.

The participants of the study were young men aged 14–16 years involved in a school section of badminton. The athletes’ experience at the time of the study was 4,7 years and they had qualification of the first and the second adult category.

The study examined the state of the physical development of young athletes. The obtained results were compared with the tabulated estimates by zones of development. It was revealed that young men of 14–16 years correspond to the fourth development zone according to the length of a body and chest girth, and to the fifth development zone – on body weight. (Table 1).

Some tests have been identified to assess the physical development of young athletes. They reflect the leading motor skills in the selection to the group of badminton (Table 2).

Correlation method was used to analyze the indicators of physical development. Analysis of the results shows the degree of the interconnection between motor abilities.

Statistical relationships showing the effect of control exercise on each other were established by the study. High negative correlations of the speed abilities (cross country running (3∙10 m)) and speed-strength abilities (high jumping, r = –0,8 and long jumping, r = –0,7) were showed. High positive correlations observed between cross country running (3∙10 m) and running of 30 m (r = 0,8). The demonstrated results indicate that only optimally high values of these characteristics implemented in the necessary speed of movement on the court and improving technical and tactical skills allow realizing their full potential in the game of any intensity.

An average connection between the motor action index speed (tapping test) was determined with the result of running 30 m (r = 0,6).

The obtained results are supported by specialists in the field of sports training that are created during adolescence some physiological prerequisites for the development of speed and power abilities. They underlie the growth speed. Adolescence is also associated with the onset of puberty, which is accompanied by increased excitability of the nervous system and its instability, which adversely affects the adaptation to physical stress and recovery process. Therefore, the strictly individual approach is required during the training.

According to the study, the following conclusions can be made:

2. The determinate high correlation of motor abilities show their significance and possible use as a criterion in the selection of badminton players.

The work is submitted to the International Scientific Conference «Modern Problems of Experimental and Clinical Medicine», Bangkok-Pattaya (Thailand), December, 20–30, 2014, came to the editorial office оn 12.12.2014.