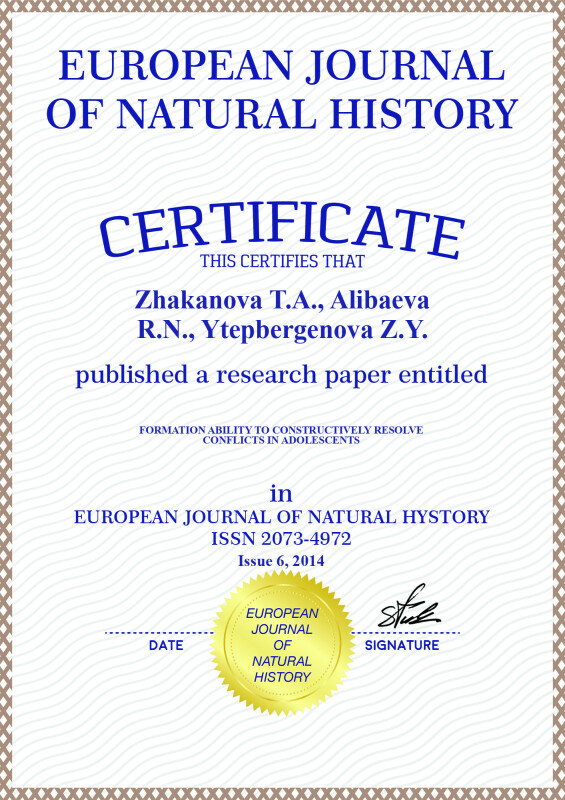 Article in PDF
181 KB
The notion of conflict today is not owned by any one particular field of science or practice. Thus various disciplines endow the concept of conflict in its content: economists often identifyed conflict with the competition, the psychology of “difficulties”, “tension”, sociologists replace them the concept of “debate”, “opposition”, etc. Analysis of the materials of the first national conference of psychological shows that the conflict is called interpersonal difficulties, intrapersonal experiences, crisis, the subject of psychotherapeutic work, collision algorithms for solving educational problems of the child, etc

Now a lot of conflict that originate from the inability to control their emotional state, low self-esteem, aggression, inflated self-esteem, miscommunication, excessive adherence to principles ... and, unfortunately, this is typical of all teens.

Conflicts are an integral part of the life of any person. Adolescence – the most difficult and complex of all childhood is a period of formation of the person. At the same time, is the most important period since during this period the foundations of morality, attitudes are formed, the relationship to themselves, to people, to society. Furthermore, in this age of stabilized traits. This period can be characterized as a desire for self-improvement.

The ability to build constructive relationships with others and effectively resolve controversial issues is an important indicator of the development of personality. And many of the skills to overcome conflict situations we develop in childhood, when we actively get to know the social world.

Because adolescence child seeks as quickly as possible to become an adult and independent, there is the greatest number of conflicts with their parents. Teenager sometimes prematurely begins to consider himself an adult, requiring appropriate treatment is as an adult, but the teenager is still far in the whole meets adulthood. Therefore, I want to highlight the first factor on the way to solving the conflict – the user’s perception of the conflict. From this follows the next factor – the creation of an atmosphere of mutual trust and cooperation. In the study of the Russian University of Psychology and Pedagogy were studied behaviors of adolescents in conflict, aggression as a property of the person, the manifestation of aggression as an act of behavior and tendencies of adolescents in the peer group. The main forms of behavior of adolescents in conflict are avoidance, compromise and competition (in 27 % of subjects adolescents revealed a strategy of avoidance, 42 % of subjects prone to compromise strategy, 31 % of adolescents tend to strategy rivalry). The findings suggest that adolescents are inclined to the strategies of avoidance and competition, can initiate or participate in conflict situations. Therefore, for a correct solution to the conflict, namely the constructive method for a teenager, it is important to know the answers to these questions:

what can I do to resolve the conflict?

that this can make my partner?

what are our common goals, in the name you want to find a way out of the conflict?

It is also possible to follow this step by step system to solve the conflict:

The joint decision to withdraw from the conflict. At this stage, it is about choosing the most appropriate way to resolve the situation causing the mutual satisfaction of rivals

Implementation of the planned method of conflict resolution. It is very important opponents, adhering target strategy, not cause hasty word? behavior etc. each other in any doubt about the sincerity of the intentions expressed earlier to resolve the conflict.

Evaluating the effectiveness of the efforts made to resolve the conflict. Based on this issue or deemed to be permitted any conclusion about the need to continue work on it. In the second case described above sequence is repeated times [1, 355–356].

Defining psychological concept of “conflict” F.E. Vasilyuk considers a complex task: “If you ask to find a definition that would not contradict any of the existing views on the conflict, it would sound psychologically absolute meaningless: the conflict – a clash of something with nothing -to. Dva main issues of the conflict theory, that it faces in it and what is the nature of this conflict” [3, 42].

“Psychological Dictionary” defines conflict as “intractable contradiction associated with acute emotional experiences” [4, 161]. When this as it forms stand intrapersonal, interpersonal and the intergroup conflicts.

Difficulties in defining the concept of “conflict” speak presence of different, often conflicting approaches to the study.

Traditionally, the study of conflict evolved within the sociological and psychological problems sciences. We will consider features conflicts with the position of these two approaches.

One of the founders of the theory of conflict is G. Simmel German philosopher, who is credited with the authorship of the term “sociology of conflict” and a priority in its grounds.

G. Simmel believes that conflict is inevitable in a society, and considers it one of his main forms of conflict between the individual and society. Conflict by Simmel not always or necessarily leads to destruction; on the contrary, he can perform the essential functions of conservation social relations and social systems.

Other followers G. Simmel was an American scientist L. Kozer – creator of the theory of positive-functional conflict. P.L. Kozera opinion, recognition of the conflict as an essential characteristic of social relations does not contradict the task of ensuring relativity and stability existing social system.

Social conflict in the tradition of domestic research is usually treated as the aggravation of social contradictions, a collision in which the parties are presented social communities, ethnic groups, classes, public education, etc. Thus, the concept of “social conflict” includes phenomena and processes unfolding at the level of macrostructures.

Psychological Conflict Studies tradition differs sustained interest of researchers to the problem of conflict variety theoretically and practical work on the subject. Meaning of the phenomena of conflict in general psychological phenomenology seen in the fact that almost every psychological system one way or another to determine their attitude towards to the conflicts.

According to Freud, the person is in a state the constant internal and external conflict with others and the world in general. “... The conflict in psychoanalysis – the initial form of the collision and constant of the opposite principles drives, ambivalent desires, etc., which express the contradictory nature of man” [5, 181]. That is a conflict of rights is not accidental but essential condition.

Meaning of conflict of phenomenology in general mental life is determined by the fact that, according to Freud, the conflict caused the extra mental unacceptable impulses of the libido and the aggressive impulses of an inner side of the individual [6, 142].

However, the methodological basis of both applied and theoretically approach no conceptual scheme itself as consisting conflict. On discussed and understood as a clash between two antagonistic sildenafil “Above Self” and “It”. “I” stands as permitting displacement of the conflict going on, “Ona trend”, then the consequences of inadequate the worrying permission. problem psychoanalyst eliminate the negative consequences of the conflict and the withdrawal of the experiences associated with the existence of the conflict.

Most fundamentally different from Freud’s position in relation to the conflict is the concept E. Eriksona. He puts forward the idea that every personal and social crisis is oboj with a challenge, leading the individual to personal growth and overcoming life obstacles. Na every stage there own specific, requiring a solution. Successful resolution of the crisis is the key to the further development of a healthy personality and a necessary factor of effective accommodation of further steps [7, 29].

A situational approach to the study of conflict is presented primarily behaviorist tradition. Due to the fact that as an objective subject matter behaviorists considered the behavior, conflicts of interest was limited mainly externally observable conflict – primarily interpersonal and intergroup.

For domestic psychological science was characterized primarily in the tradition stemming from the psychotherapeutic approach, the adoption of a human subjective evaluation of the situation, its subjective residence as an essential component of a conflict. So V.N. Myasischev notes that experience is arbitrary from the individual experiencing, and to be explained in connection with its features.

Analysis of research on the problem of the conflict leads to the conclusion that to date has not yet happened psychology generally accepted understanding of the conflict. Much of the psychologists consider it as a contradiction, others – as a collision or opposition.