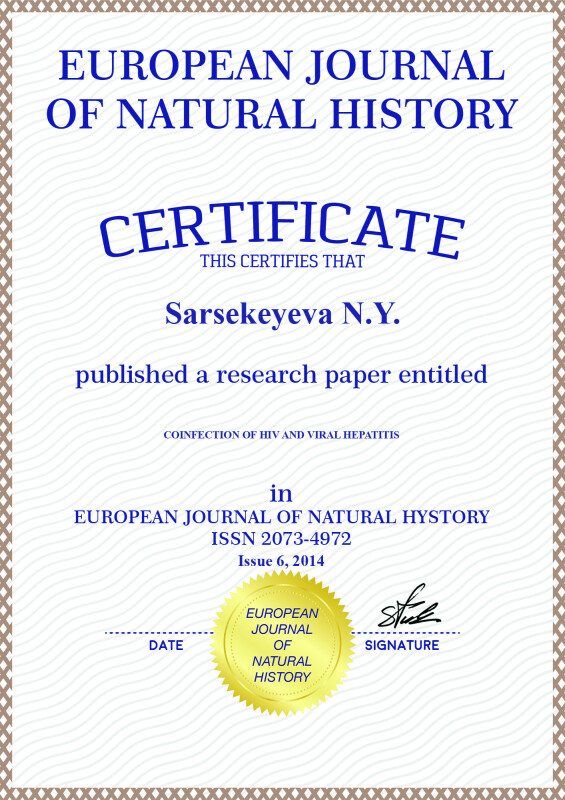 COINFECTION OF HIV AND VIRAL HEPATITIS

The urgency of the problem of HIV and viral parenteral hepatitis largely is determined by common epidemiological, social and economic indicators. The growing importance of viral hepatitis is associated with their wide extension, its variety of clinical forms, a significant frequency of adverse outcomes, large economic damage [1].

HIV-infection and viral hepatitis are the two most serious and wide-spread viral infections causing significant morbidity rate and mortality. The peculiarities of HIV extension and hepatitis B are conditioned by common ways of carry-over infection. The state of immunodeficiency with HIV-infection contributes to the acceleration of viral hepatitis flow. The occurrence of AIDS progression and fatality conditioned to AIDS-related illnesses is significantly higher in patients co-infected with HIV/HBV or HIV/HCV [3].

It is important to note that the prevalence rate of HIV-infection is increasing in parallel number to morbidity of viral hepatitis with parenteral way of extension. In recent years, the bulk of injecting drug users is involved to the epidemic process of HIV-infection. As with HIV, the leading role in the extension of hepatitis B and C belongs to injecting drug users. However, the importance of sexual transmission continues to increase [4].

It is known that hepatitis C takes the leading role in the structure of chronic morbid affection of liver in developed countries, infecting about 1–2 % of the population. Hepatitis C is one of the most frequent causes of chronic liver diseases, causing heavy damage to the health of people with HIV-infection. Mixed infection with HIV and hepatitis C virus modifies the epidemiology, clinical course, virology and natural history of hepatitis C. Compared with patients infected with only hepatitis C, the patients coinfected with HIV/HCV have higher levels of RNA HCV (which increases the risk of parenteral and vertical virus extension), a higher degree of necrotic and inflammatory changes according to microscopic examination, slow response on treatment, hepatic decompensation of liver functions and hepatic failure and also increasing level mortality [5–7].

Under the co-infected with HIV and hepatitis B we mean the chronic phase HBV-infection. Patients infected with HBV, immunodeficiency virus may contribute to chronic acute hepatitis; reduce the frequency of HBsAg and HBeAg seroconversion or activation of chronic hepatitis, especially patients with the development of severe immunodeficiency. Hepatitis B with HIV-infected patients is more common and more severe. Patients with multi-infection HIV/HBV the necroinflammatory processes in liver tissue are usually less extended. However, active HBV replication increases the risk of cirrhosis, and the faster the end-stage of liver disease comes. Patients co-infected with HIV/HBV hepatocellular carcinoma occurs earlier than in patients without HIV-infection. In addition, when with coinfection HIV/HBV we observe more frequently multifocal damage of liver. When with multi-infection HIV/HBV, especially when a small number of CD4-lymphocytes the risk of death from liver disease is increasing [3, 5].

In Kazakhstan, the epidemiological situation of HIV-infection as a result of planned anti-epidemic measures in recent years is stabilized and is on the concentrated stage. The prevalence of infection among the population does not exceed 0,2 %, which is several times lower than the average in the region of Eastern Europe and Central Asia.

According to the Global competitiveness Index of the World Economic Forum of Kazakhstan according to characteristic of «HIV extension» takes12th place among 144 countries of the world. Annually about 2000 citizens are put HIV diagnoses according to the National Center data for the last three years. The most vulnerable age group of HIV-infected people remains employable population.

Aim of research: studying of the prevalence of chronic viral hepatitis B and C with HIV-infected patients in the Karaganda region.

Under the supervision were 124 HIV-infected patients who were in the dispensary in GU “Karaganda regional center on the prevention and control of AIDS”.

HIV diagnosis was verified by the method of immune blotting. The clinical diagnosis was established on the basis of complex clinical and epidemiological, biochemical, and serological and instrumental research methods. Marker medications of hepatitis were detected with the help of enzyme-linked immunosorbent assay (ELISA). DNA and RNA viruses of hepatitis B, C were identified by method of polymerase chain reaction. Virus genotypes were determined with patients with chronic hepatitis C.

The analysis of the age structure showed that the largest group were patients aged from 29 to 39 years (83 patients), i.e. young people of working age, whose specific gravity was 66,9 %. In this case, the majority of patients of Karaganda region with HIV-infection was noted in 1995–2002 y., and today, due to the natural history of HIV-infection, there is a significant increase in the number of patients with this age group. Among the total number of 124 surveyed coinfected with HIV and chronic viral hepatitis, 79 were men (63,7 %), women – 45 (36,3 %).

The prevalence analysis of marker medications of viral hepatitis B and C (HBsAg, anti-HBcorIgG, anti-HCV) among 124 HIV-infected patients who were in the dispensary observation in GU «Karaganda regional center on the prevention and control of AIDS» showed that 65 (52,4 %) patients with HIV-infection were identified chronic viral hepatitis B and C.

From the total number of 65 examined, 54 patients were infected with HIV by drugs usage, which accounted for 83,1 %, in 11 (16,9 %) examined the infection occurred through sexual contact (infected sexual partners, casual sex contacts). Among patients who used drugs were 45 men (83,3 %), women – 9 (16,7 %). It should be noted that women are infected with HIV through heterosexual intercourse, while men are mainly infected through intravenous drug use. This fact explains the epidemic of drug abuse, swept Kazakhstan in the late 90s, which led to HIV-infection by intravenous administration of psychoactive substances in 70–80 % of cases. In this regard, the dominant cause of HIV-infection and concomitant HCV-infection was the use of intravenous drugs.

The diagnosis of chronic viral hepatitis C was exposed to 45 (69,3 %) patients and confirmed the identification of specific serological markers by enzyme immunoassay (the presence of anti-HCV), as well as the detection of HCV RNA by polymerase chain reaction.

Thus, on the territory of Karaganda region patients coinfected with HIV and chronic hepatitis C genotype 1b and 3a were prevailed.

HBsAg was found among 25 HIV-infected patients, which is 38,5 %. Thus 22 from 25 HBsAg-positive patients simultaneously had antibodies to both viral hepatitis C (88 %). From 22 anti-HCV positive blood samples were tested 22 on RNA HCV by PCR method, in 17 cases the result was positive. Consequently, 26,1 % of the patients had a place chronic hepatitis of mixed etiology B + C. Monoinfection of hepatitis B occurred only in3 from 25 HBsAg-positive patients, which is 4,6 % from all surveyed and 12 % from HBsAg-positive (Fig. 2).

Fig. 1. Variants of genotypes among patients coinfected with HIV and chronic hepatitis C of Karaganda region

1. According to anamnestic data it is revealed that on coinfection with HIV and chronic viral hepatitis the leading way was parenteral infection through injection of drugs (83,1 %), then by sexual way of infection transmission (16,9 %).

2. Patients coinfected with HIV and chronic hepatitis C had genotypes 1b and 3a dominantly on the territory of Karaganda region.

3. Conducted study showed that among patients infected with HIV, in 52,4 % of cases serological markers of viral hepatitis were met. In most cases, chronic hepatitis C – 69,3 % and chronic hepatitis of mixed etiology B + C – 26,1 % was diagnosed. The rate of infection by only virus B is no more than 4,6 %.